While in Iowa, I fished in  Daughters pond, for about 5 minutes, and caught a 5# bass, but we didn't have a camera at that time, so when caught the catfish, here came a camera!! We guessed it at 22# because we just put it back in the pond!! 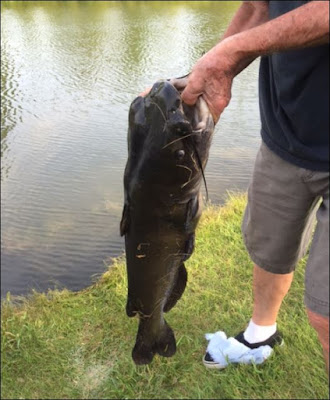 Butch and I have read Chuck Woodbury's RV newsletter for the entire time we have Rv'd and now and then I have shared something from his newsletter. I started reading today's entry about Chuck's findings from his past 3 months of living and traveling in his RV and I had to agree with 99% of what he wrote so thought I would share his findings with all of you. Great reading...
http://rvtravel.com/?q=node/1974
Posted by Barbara Brooker at 9/05/2015 11:18:00 AM No comments: Links to this post

Our neighbors to the south moved out. It is a rental. We liked them because they kept the yard clean and mowed. We found out they moved out due to a severe mouse infestation catching as many as 8 in a day. Our alarms went off so yesterday Butch bought 2 traps and set them in the garage and in less than 24 hours we caught 2 mice. So our alarms went off even louder and we upped the ante on them today. Stay tuned for further developments...and a death count.

I have 3 plastic file cabinets for hanging files with lids. I asked Butch to make a different lid for it. A flat lid so I could use it as a side table. He obliged as he is wont to do when I ask. Bless his heart. So I now have two little handy side tables with storage. 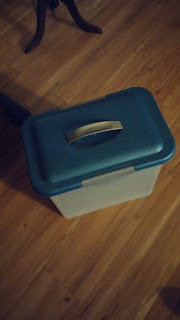 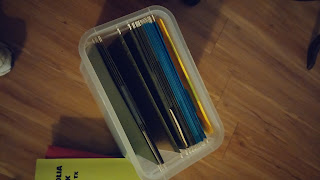 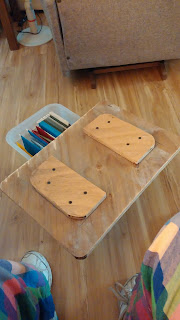 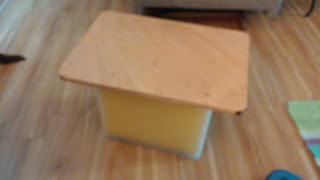 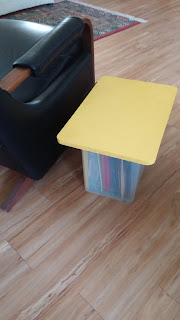 Colleen is headed west to see her son and his wife and will be out there for about 3 weeks. Then she will be back for a week and then off to Cincinnati to stay with her daughter and her husband for a while before going south. I miss her already. Today I rode my bike instead of walking and I snapped a few photos. The trail is decorated with wind chimes in preparation for a biking event this weekend. I wonder if they took the birds into consideration before doing this. I am guessing not. 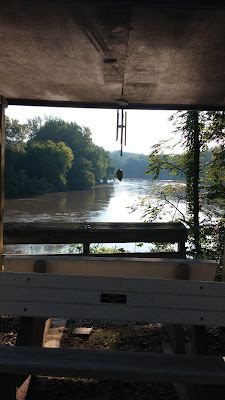 The river is still riding high but it is perhaps 2 feet lower than the last time I was out this way. 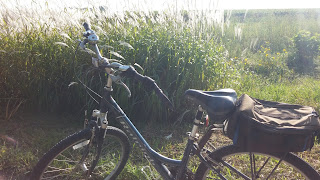 I love Pampas grass and the silvery flags 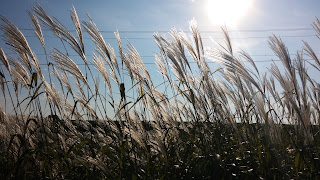 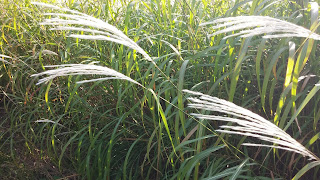 School has started, we are looking at fall and so I am guessing people's lives are beginning to turn in a different direction. How do I know this, you might ask? Because I am getting a larger number of computer inquiries from a lot of different directions.
Hence this post for those who need anti-virus/anti-malware protection. In fact Emsisoft is now calling their product Internet Security and that describes it so much more accurately.
Ultimately it is your choice.
I used to use avast. but now I am using Emsisoft and pay for it. The free ones make you jump through hoops to get it so I decided to pay for a good one so I could get and forget.

Emsisoft at a discount. I trust this source.
http://thundercloud.net/emsisoft/

And as an added note for all my ChromeBOOK friends. You do not need any of them. 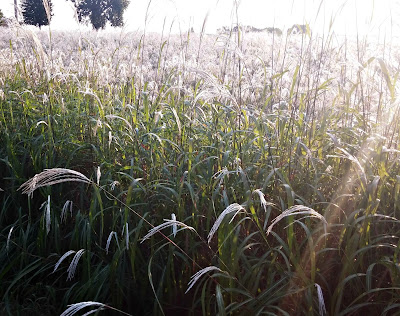 Pampas grass all silvery in the morning light 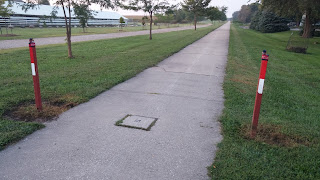 There is a story here. Yesterday Colleen and I saw these baby socks on the trail and picked them up. We suspect they may have fallen out of a stroller. They were about 2 blocks apart. So we decided to make trail art of them and see if they were still there the next day. We put them on top of the posts beside the trail. Still there today. 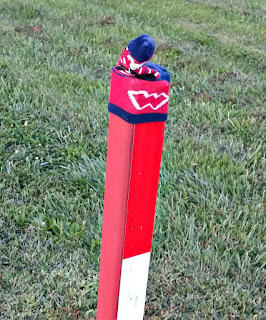 Below is a picture you cannot get everyday. Sunkissed Corn. 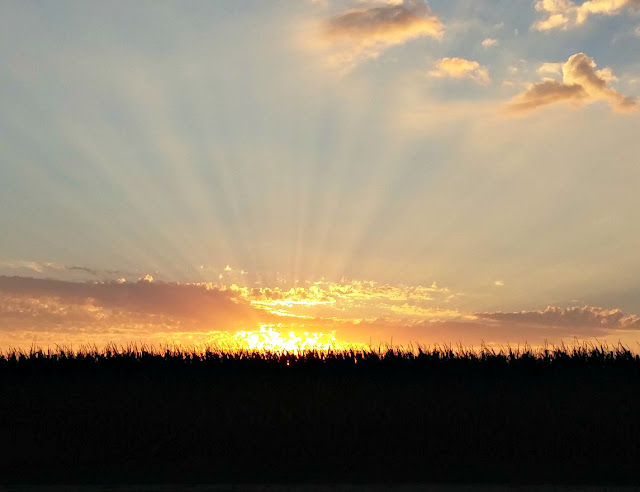 And here is a pop of color for you. 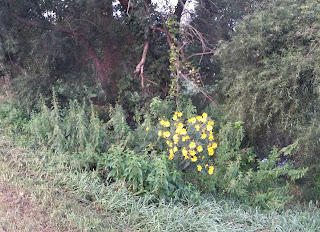 I am not telling that Butch and I went for an eye appointment in Ames and we were a week early. My fault. I looked at the calendar but saw the wrong date. That is the bad news. The good news is we had a wonderful lunch at Hickory Park in Ames and those in the know, know that was a special treat.
Posted by Barbara Brooker at 9/02/2015 09:13:00 PM No comments: Links to this post

Colleen and I have talked all summer about getting some basic maintenance done on her computer. In her process of cleaning and clearing out her house, she found a little pink tablet she had lost track of so that came into the plan as well. She is still on the fence about Windows 10 as many people are so we are leaving that alone for now. Her little one does not have enough gumption for Windows 10 anyway. I knew that catching up on updates would be a part of getting the little pink one up to snuff but I sure didn't realize how much. I installed Kindle for PC on it as it is the perfect size for that and once I was done I shut it down. That was at 2:00 pm today. But whoa Nellie! There were 200 updates to install so  we commenced. It is now 9:00 pm and I took a picture a few minutes ago. 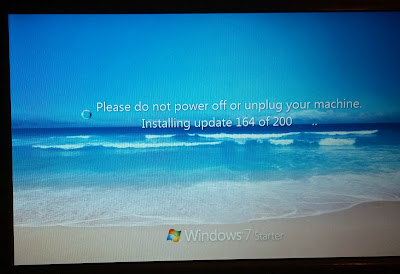 So it looks like we may have a couple more hours to go. I feel good knowing she is leaving for vacation with 2 computers with all the little loose ends taken care of.

Butch and his mower... 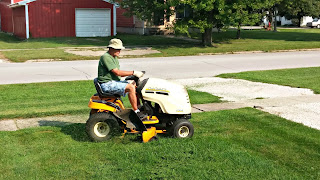 Butch? Or is that Mister Magoo? 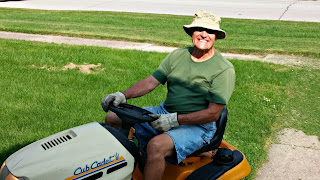 We did meet and once again I was so wrapped up in it all I failed to get any pictures! We did have fun though as we always do.
Those in attendance were:
Myrla Cripe Kloster- my nutty little sis
Theresa Brock Arts- my artsy sister
Phyllis Zimmerle Moss- my cousin
Joanna Conant Neff- my 2nd cousin
Karla Turley Hiller- my niece
Devon Hiller- Karla's son
We'll do this again next year!

BITS AND PIECES
The bike trail had an intersection with gravel on the last road before getting to the Raccoon trestle bridge. It has now been paved! The good news is you will no longer need to slow down because of the smoothness of the trail. The bad news is trucks come flying over a hill and would not be able to stop if you were in the wrong place at the wrong time and the terrain is such you would not see them coming. 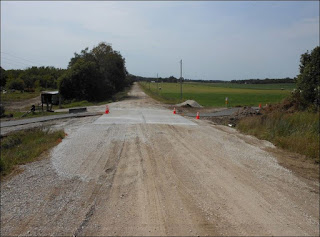 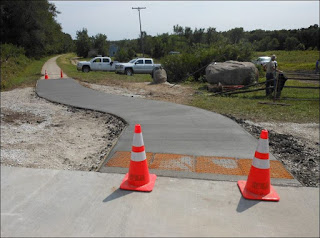 Below is a picture of Leo and Keri's grandson Brady on the right. I love this picture with the corn as a backdrop and I would say these two are buddies. When Brady's brother was born just this past week he was asked if he knew his brothers name and he said yes. His brothers name is Beckett but he calls him Max. I gather this is not all that unusual. Cousin Joanna told us that when she brought her second son home her first son said the baby's name was Toby-it wasn't but they ended up calling him Toby until he went to kindergarten. 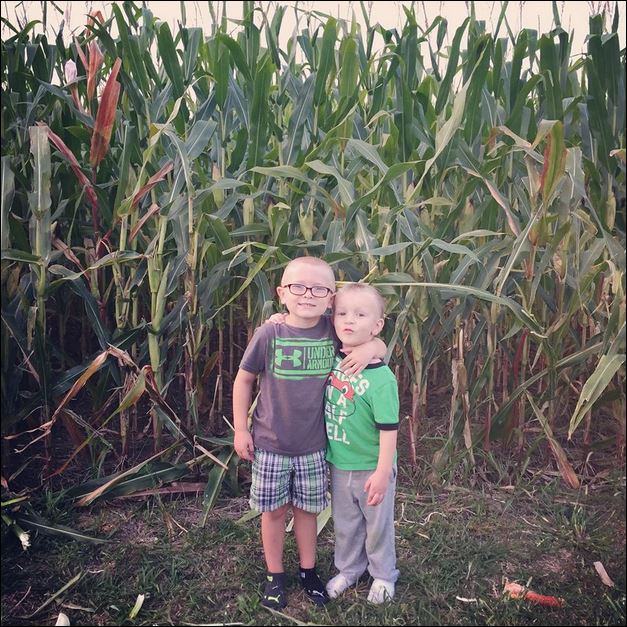