We have a son who recovers items that have been discarded and refurbishes them. His latest rescue item is a ice fishing tent. A coworker had become disgusted in trying to get it setup in  too much wind and alcohol and tossed the whole business in the trash. Jason comes to the rescue for the tent- not the coworker.

Gary, another son is trying to gather up some skiers for an excursion to Colorado. Butch would love to go but his back has one too many tumbles down the mountains. Gary is going the first week in March so if this has peaked your interest let me know and I will get details.

I am still doing my best to get two walks in a day and though the weather is often borderline it has been good enough to bundle up and hit the pavement. The sun is brightly shining today almost to the point of hurting my eyes. And they are promising a more favorable forecast for the next week at least. We are going to savor it.

Butch is up to his neck in pool and golf with the emphasis on pool. We'll see him later...

App of the Week

I am currently listening to Prairie Home Companion and loving it! All from this article below. Chrome users-you can get it at the Chrome Web Store.
Barb

Listen to your home radio station while on the road
There are several apps that let you listen to live radio over the Web. The one we (Geeks On Tour) use is TuneIn Radio. We are from Florida but we are currently traveling in Arizona. If I want to listen, live, to a Florida radio station, I can do that with TuneIn Radio. It is a free app on both Android and Apple devices. In addition to live radio stations, you will also find archives of radio shows. So, if you like NPR's "Prairie Home Companion," you can listen to it 24/7! Just search for Prairie Home Companion.

I have not forgotten my blog readers it may just seem that way!  I will catch you all up this afternoon...after my nap. I have been on antibiotics since December 10th and will not be finished until February 10th and I am blaming them for sapping my energy. Or maybe it is the weather because we are only briefly blessed with the good stuff and then the cold and gloom descends once again. So stay tuned!
Posted by Barbara Brooker at 1/23/2015 08:27:00 AM No comments: Links to this post 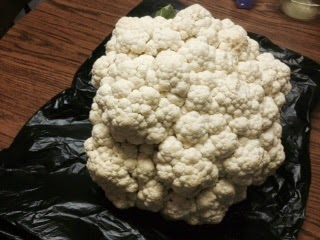 It is cauliflower season. And Peggy and I were gifted with a giant one. This is easily  the size of 4 of the usual ones found in the produce section of our local grocery. Price? $2
Posted by Barbara Brooker at 1/18/2015 09:44:00 AM No comments: Links to this post

We have had a Chromebook for over a year now and I have not fallen out of love. It is simple, easy and trouble free. No malware. No viruses. No updates. No operating glitches. No frustrating mystery tours to find fixes.  I really like things that work as advertised and that is so rare these days. And NO, I am not a Google employee.