We have finished the front side of the house, getting things back in place. You can see how bad we need rain. 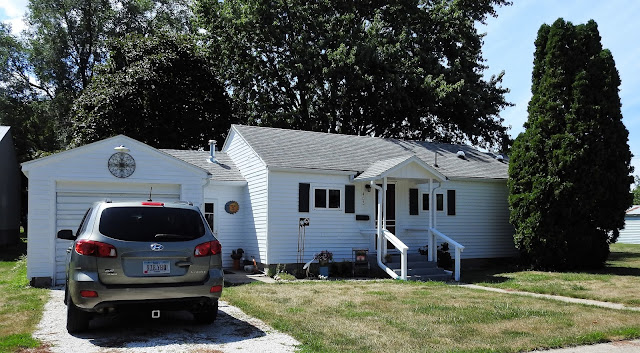 And then Peggy Cunningham sent me these photos she took when Eldon was fighting with the wrens. Thanks, Peggy! 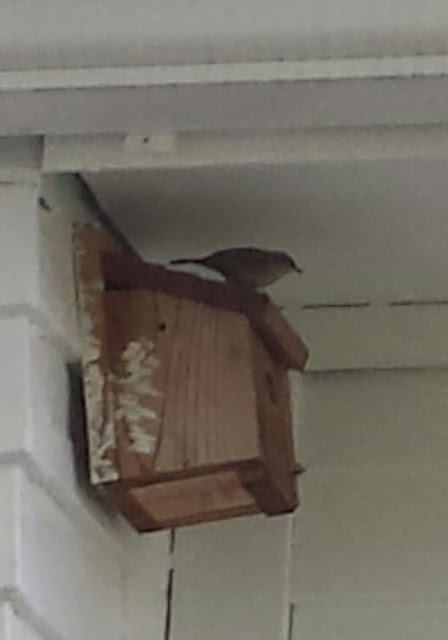 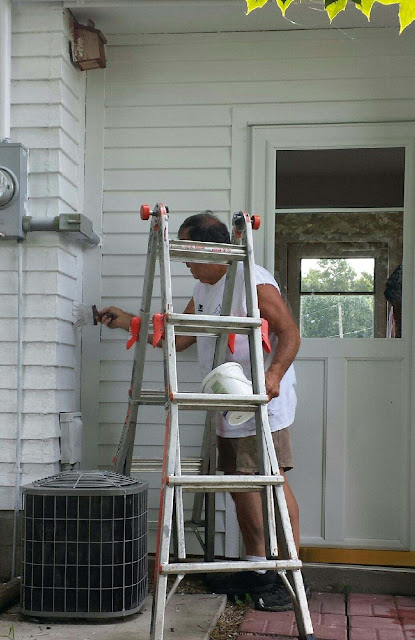 Eldon was putting on the last bits of paint when I took this photo. He was dive bombed by the wrens because they are feeding babies now. Eldon said she warned me yesterday and she had enough of me today and pecked him on the head. 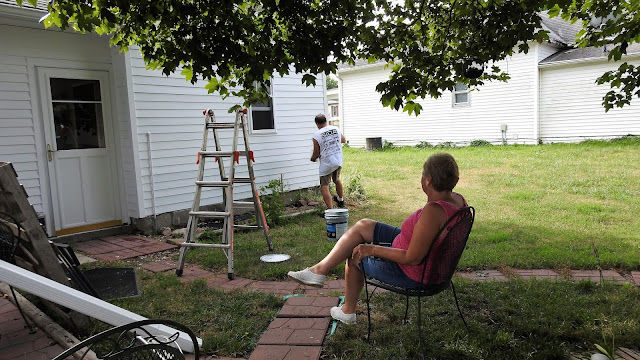 The house took 5 gallons of paint. We purchased it at Diamond Vogel in Fort Dodge. Permacryl Exterior Latex semi-gloss. For the record.
Posted by Barbara Brooker at 7/28/2017 09:41:00 PM No comments: Links to this post

...to herd cows. Beautiful calm day, moderate temperature, abundant sunshine and a bike trail that beckons. I planned to ride to Winklemans Switch but as I approached the trestle bridge this is what I encountered. 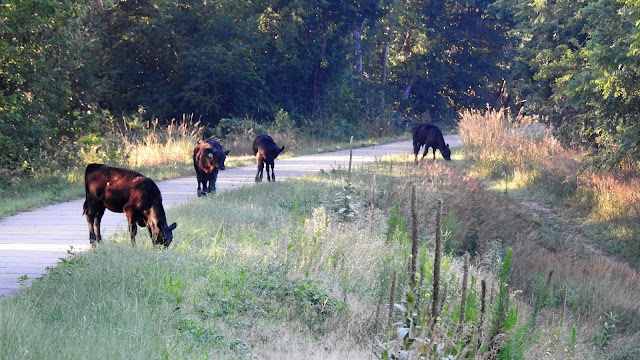 And I was not in the mood to herd cattle. I have in the past. I ring the bell on my bike and they trot along in front of me until they can find an escape route. I had visions of getting them on the trestle bridge and then what!?
So I turned around and came home with the idea of getting busy. That didn't happen. It was a day of fits and starts. Maybe tomorrow can be more productive.

Butch calls it my bullet hole. This is the biopsy scar and it is healing okay but there is more to come. Surgery date is set for September 1. It is an in-office procedure. I thought I might have surgery this summer but this is not the one I thought.  But I consider it a small bump in the road. Or maybe a small bump to the head. On the upside, the plastic surgeon told me I didn't have many wrinkles for my age. Not something I had thought about. 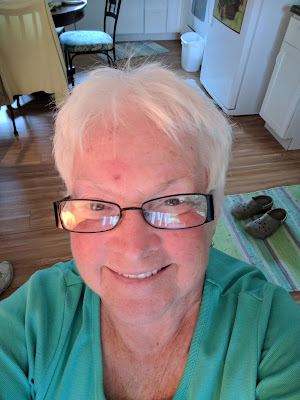 Our friend Donn Gordon celebrated his birthday with son Adam and grandson Austin. That birthday treat sure looks good! 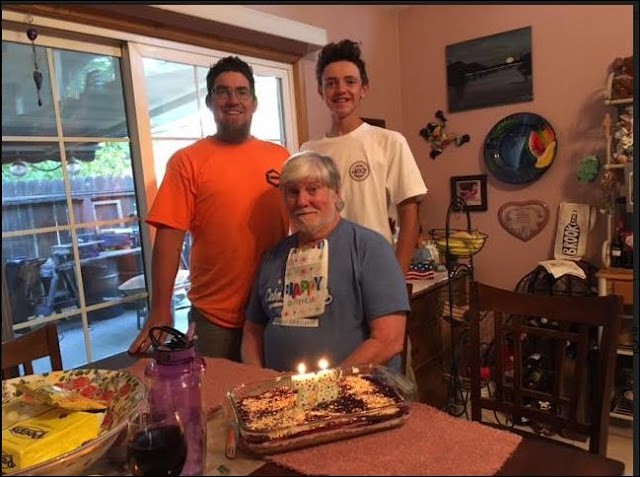 Leo sent me some pictures he took while vacationing at Lake Okoboji. Marlene and Bernard live near there so it makes it easy to get together with extended family. 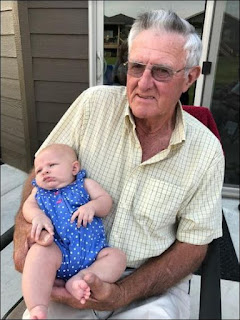 Baby time at the lake. Bernard with his great-granddaughter Reagan Kelley. 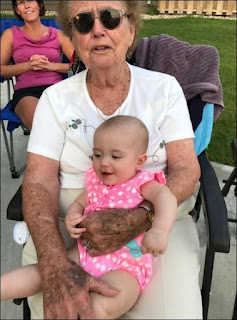 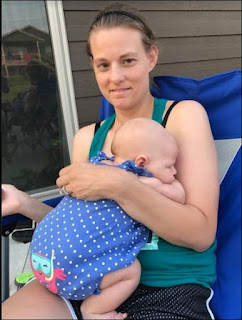 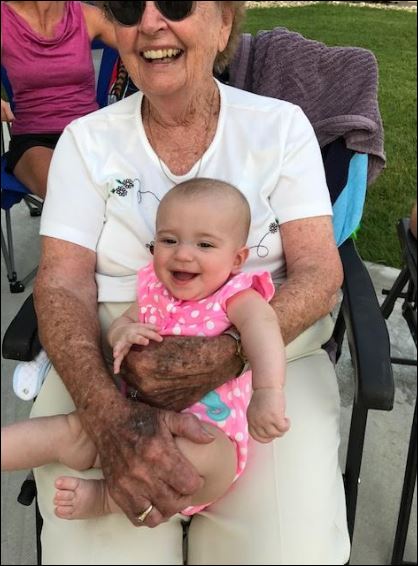 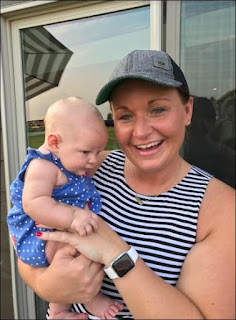 And finally Leo's first tomato. It does look yummy!! 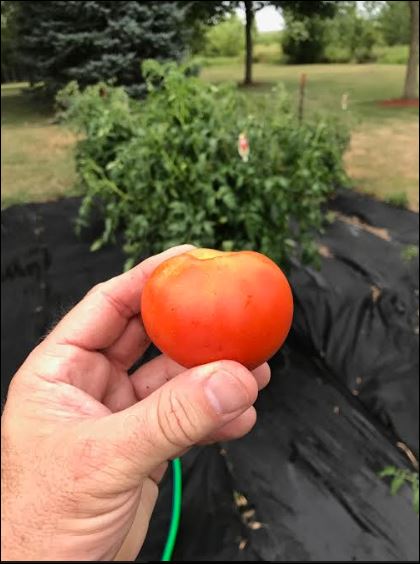 It is coming together... 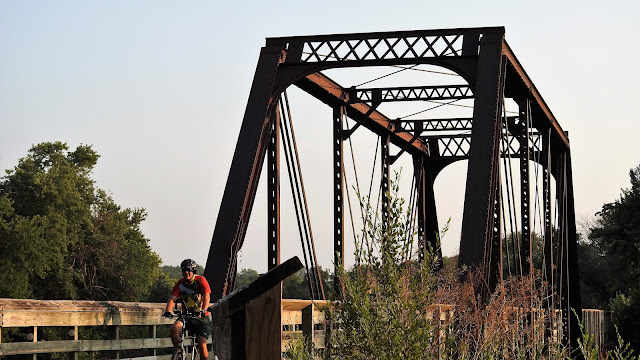 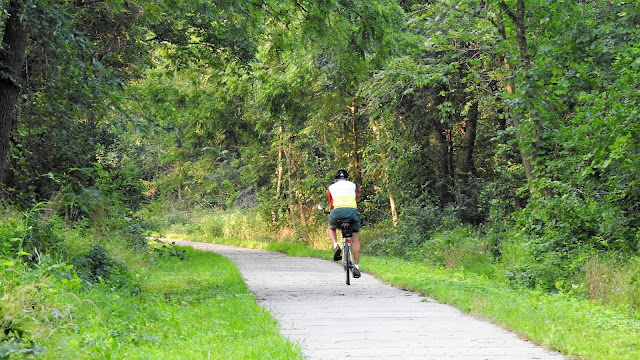 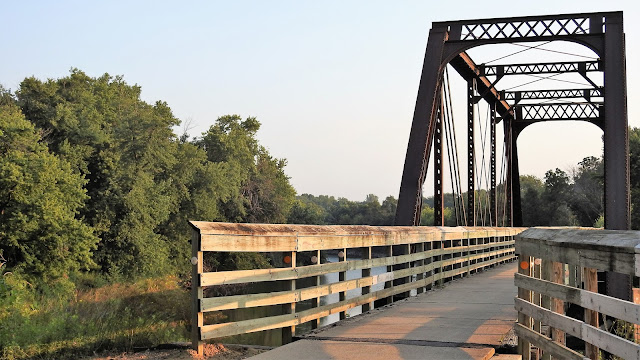 Woodpecker down by the riverside 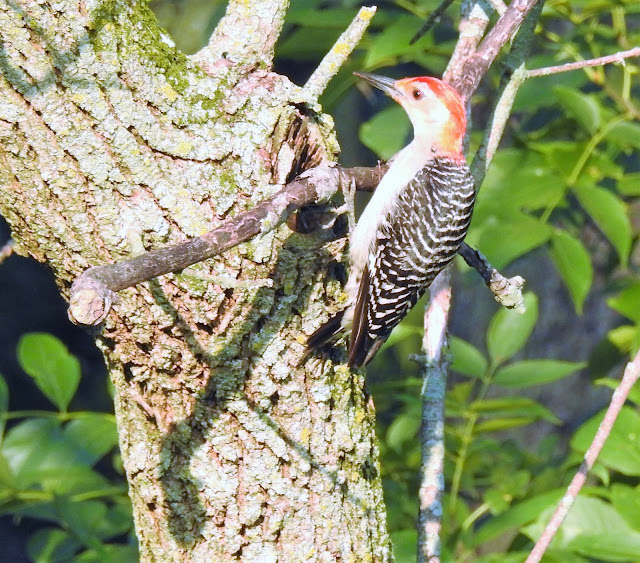 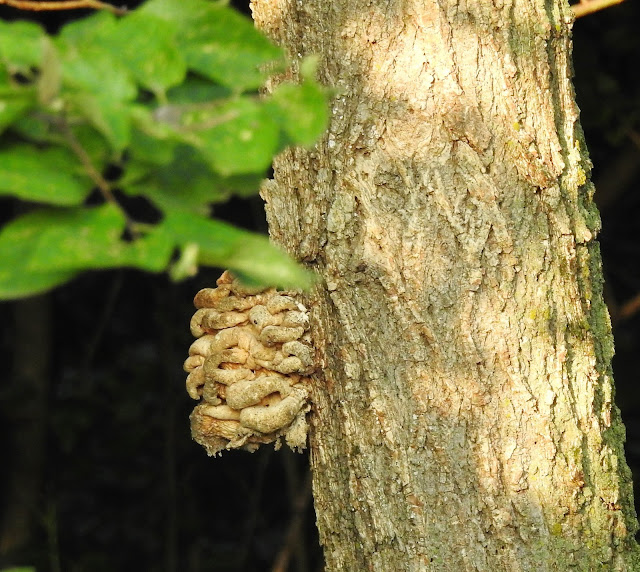 Today is our 58th anniversary. We ate out twice. Chicken day at the casino and Farmers Market uptown on the square. On top of that, the painter came and started painting. He works very fast and by days end is half done. It looks very nice. Better than it ever has. Pictures will be posted once we have everything back in place.
Tomorrow we go to Ames and the plastic surgeon will be doing his magic on my forehead.
Posted by Barbara Brooker at 7/25/2017 07:38:00 PM No comments: Links to this post

Saturday morning was a bit cooler but also cloudy, foggy, dark and damp. It was a riding day so I rode to Bullhead Farm 4.8 miles from our house. It is past Winkleman's Switch a quarter mile or so.  So my ride was 9.6 miles total. I didn't take my good camera but used the one on the phone. Anymore I am fussy about the light and the quality of pictures you will get with poor lighting. 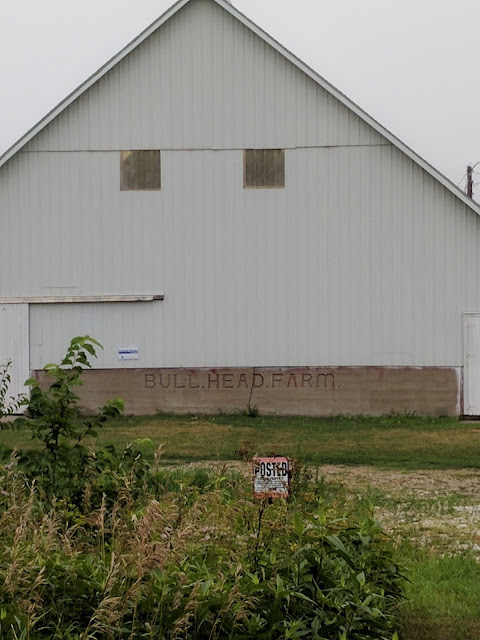 Today, Sunday, Butch and I have been getting caught up on the little things that take a short time but get overlooked unless you get right on it. We are about halfway done with a pantry that will fit in the slot between a cupboard and the refridge. It has been on the list for at least a year. Butch has his part mostly done. I have to get it sanded and painted. One of these days soon I will be taking many new photos.

Butch was working in the garage a few minutes ago and the painter stopped by to see if he could start tomorrow with the power washer and the answer is "YES, YOU CAN".

A tidbit- At 4:30 AM on Saturday I awoke with a start to a loud sound. But after I awoke all was quiet and I could not discern the source of the noise. I got up and looked to see if there was a storm brewing but there was not. So I went back to bed and laid awake trying to figure it out. Maybe I had been dreaming? You know what it is like when something like that is on your mind? Suddenly sleep is a long way off. So I laid there for another hour...awake. Finally, I decided to get up and get on with my day since I wasn't sleeping anyway. I made coffee, got dressed, took my morning pills and readied myself for a bike ride. As I was headed to the garage I noticed a can of cat food on the floor! Butch has been feeding Leo and Keri's cats because they were not home and the sack of cans was sitting on a kitchen chair. One of those sneaky cans had made its way loose and tumbled off the chair. Mystery solved!

Another tidbit- A month or so ago a friend here in Jefferson asked me to look at her computer because it was doing odd things and running very slow. I usually enjoy these kinds of chores because in no time at all I can have it much improved-usually. I had minimal luck with hers getting the bugs out. Yes, it improved but it was a long way from where it should have been so I suggested she get things backed up as best she could because it was obvious her computer was terminally ill. She put her files and pictures in Dropbox and Google drive and since most of her other stuff such as apps etc were in Chrome she was in good shape. Well, this past week her computer bit the big one. She thought she might like a Chromebook because she does very little on the computer that she would need more than that. There are pro's and cons of course and I made sure she was aware of them and offered her my Chromebook to use to make sure it was something she would want before committing to it. It did not take her long to decide and purchase one. She was amazed at how seamless the transition was first to my Chromebook and then when she received her own another seamless transition. It is very gratifying to me when it turns out as expected.