First appointment was with an allergist. I have a had a nasal drip ever since we returned from Texas and before. I was tested for allergies. The verdict is in and I do not have allergies! I have what is called Vasomotor or non-allergic rhinitis. Something of unknown origin can trigger it and may not go away once contracted. So now I have a prescription nasal spray and I am hoping to get rid of this tickle in my throat and naggy little cough.

And the second appointment was because of a bump on my thumb. It is a new bump. Doesn't hurt at all and wouldn't worry me at all but it is new. At least I think it is new. No worry here either. It is a ganglion. I am familiar with ganglions from working in the doctors office years ago. It may or may not go away on its own but doesn't hurt or bother so no problem.

Both visits were reassuring. Seems I need more of that these days!

This morning's 2.63 mile walk was hard! It was 73 degrees at 6:00 am with 74 percent humidity. I felt like I was walking through warm soup. We have a heat advisory. Butch is antsy to get the mowing done but it goes away as soon as he goes outdoors for a minute.

Our squirrels do not trust us or they do not like ice water. Maybe both! I put an ice block in the satellite dish and the squirrels will not go near it. They are curious and check it out delicately but that is all. The little wimps!! 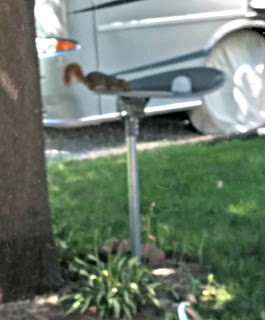 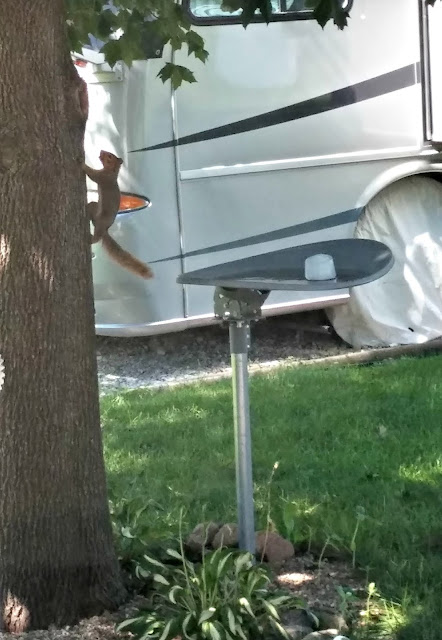 The DNR guy called me and talked to me for quite awhile. He said deer are very resilient and related stories of deer being shot and the hunter finding it with an arrow through its neck that had long since healed. He said he saw a Mama deer with three legs and her injury was completely healed and yet she gave birth to triplets and raised them up. And if the little ones are old enough to drink water and eat grass (they were) that they will be just fine. So we can all rest easier and hope for the best.
Posted by Barbara Brooker at 8/03/2016 12:40:00 PM No comments: Links to this post

I finally got a ride in this morning. I missed the last two mornings due to morning storms. This morning it was fog-lots of fog but I didn't let that stop me. I go at 6:30 so there are not a lot of people out and about at that time, cutting down on my chances of getting hit. The visibility was 1/4 mile at best and in places, it was about 30 feet!

They had the cross country kids (I assume) on the trail this morning and for some reason, they seem to think they had a priority. Very, very few seemed to think they had to make way for me. I successfully bluffed them out. It made me irritated that I needed to bluff them out! I was thinking if one of those Lance Armstrong wannbes had come by he would have wiped out a few kids. I would have offered first aid and used my phone to call 911 while I chewed on the ones who didn't get hit! The coaches should have had a short talk about trail etiquette before letting the dogs out. End of rant.
Posted by Barbara Brooker at 8/03/2016 12:34:00 PM No comments: Links to this post

Sunday on the lake

Jack and Jan Tallman, friends of ours from our square dancing years, live on Lake Panorama. They are part of our Yale/Panora Iowa group of friends and we still get together for cribbage games. Two summers ago Jack suffered what he calls a brain bleed. He was cutting down some small trees and it required him to bend over to cut them off next to the ground. I pictured these trees to be ones that had grown up in a tight line and each of them were about 2 inches in diameter. He suddenly found himself on the ground unable to move. I asked him if he knew what had happened to him and he said yes, he knew something had happened in his brain. He laid there unable to move for  3 to 4 hours. He said he was afraid he would not be found before dark and a fox might come by and start chewing on him and he would not be able to do anything about it.
Jan had been shopping and came home about four. She had bought a shirt for Jack and decided to take it out to him to see if he liked it. That is when she found him. Jack has been through lots of therapy but is still quite limited in his mobility. He can get himself around with a walker but moves slowly and says he has no energy.
And now I continue. Jack had been working on a project building a lighthouse to put down by the lake and it was partially finished. Recently friends of his had picked up on the project and finished it for him. It was to be placed down by the water. A friend of the Tallman's named John finished the lighthouse build. Every lighthouse needs a light and that is where Butch came in. Jack and Jan's son John had built a platform for it so all in all this was very much a group endeavor.  So as not to confuse you there are two Johns. John the friend builder and John the son platform builder and all-around handyman.

These photos are ones I took for the day and I am not going to be picky about which ones I post. So look quickly or linger, it is up to you. *smile* 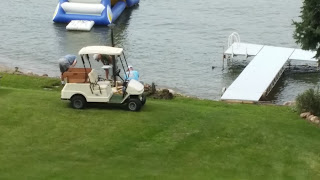 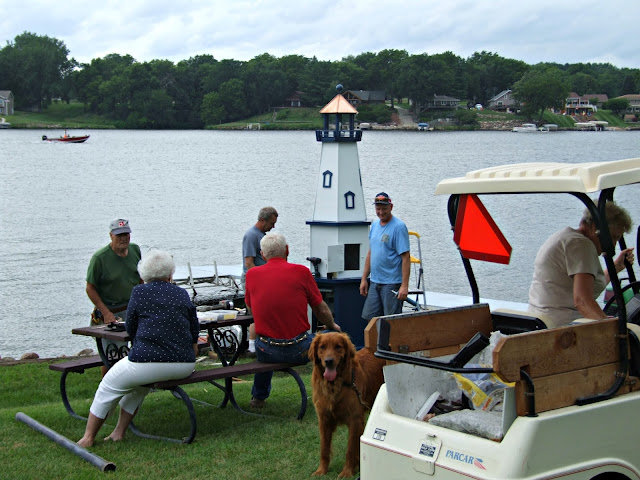 Toward the end. Butch on far left, Judy and Marv Smith seated at the picnic table, the two Johns down by the lighthouse, Jan getting into the golf cart and Skippy who is Marv's dog. He was named Skippy because he was the color of Skippy Peanut Butter. 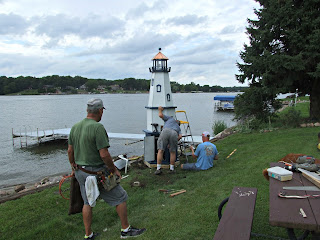 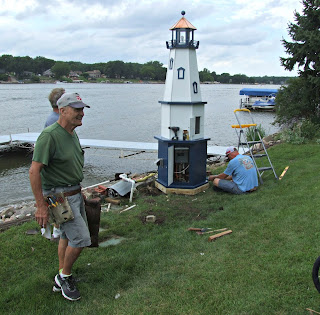 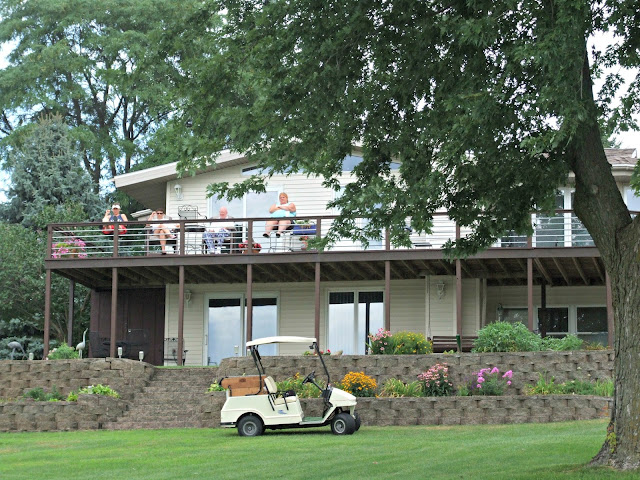 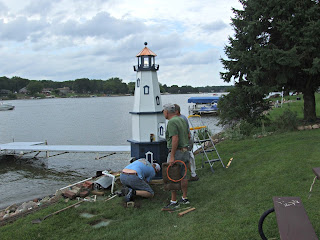 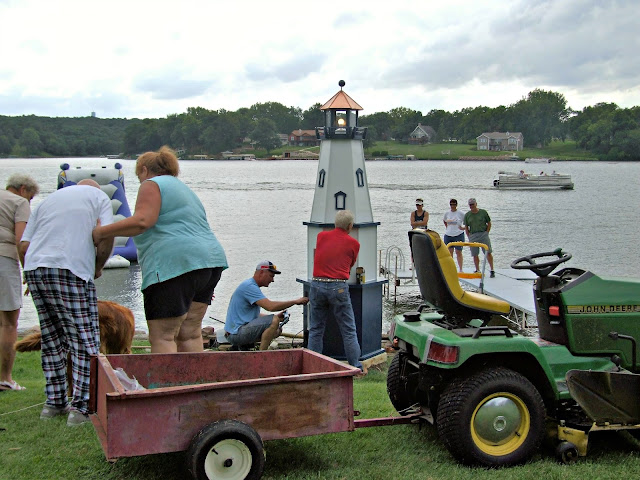 Jack comes down to see the finished project. His daughter Jill is assisting him. 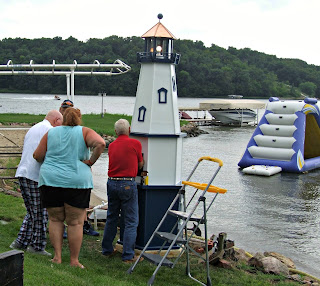 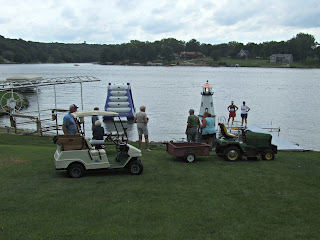 Jan and her helpers also put together a delicious steak meal enjoyed by all.