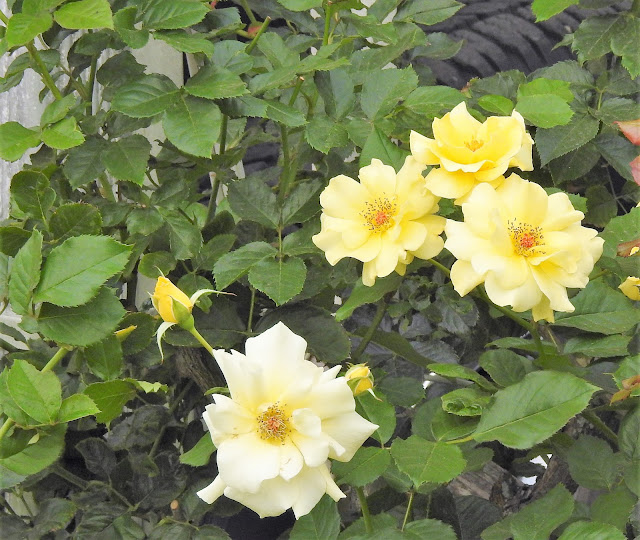 These started out being Jo Brooker's roses but now they are Peggy Gordon's roses. They have come through some tough times but always bloom in the end. 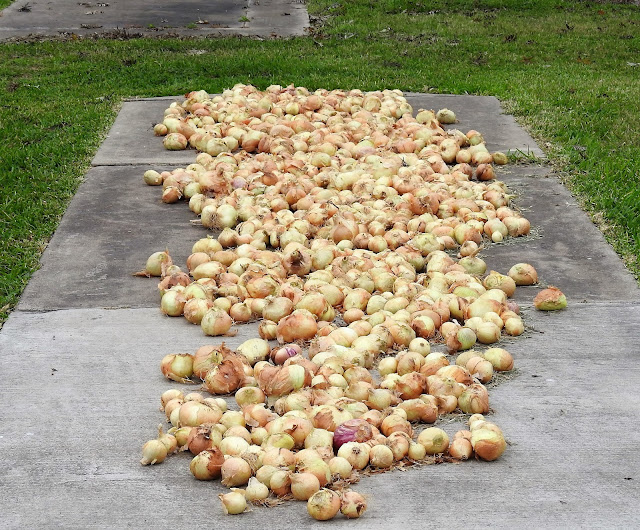 Gleaned onions drying in the sun. 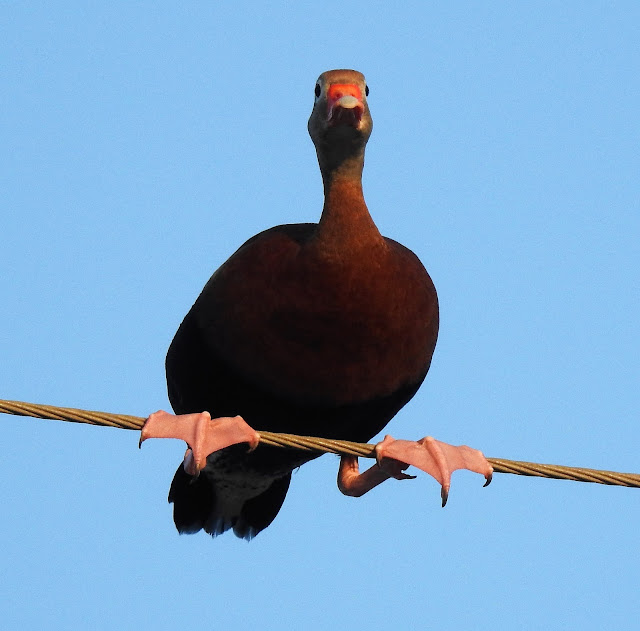 Black-bellied Whistling ducks on a wire just above our RV. 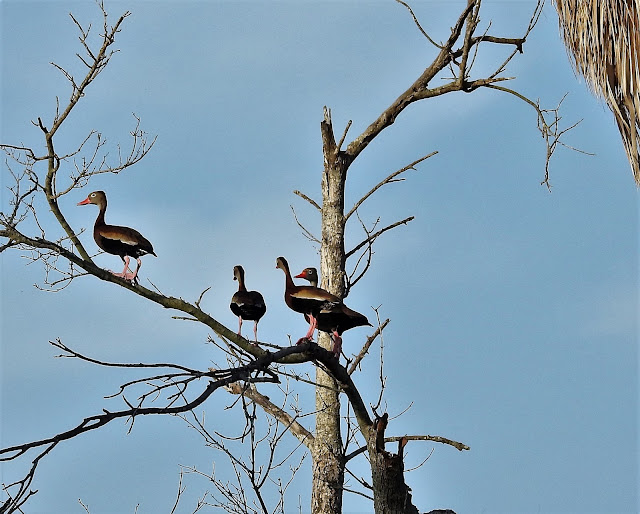 Four Black-bellied whistling ducks hanging out in a tree on the lot west of the park. 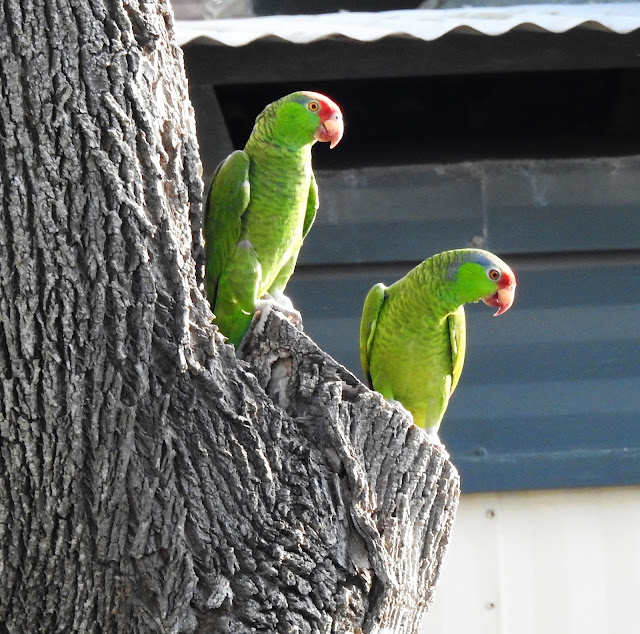 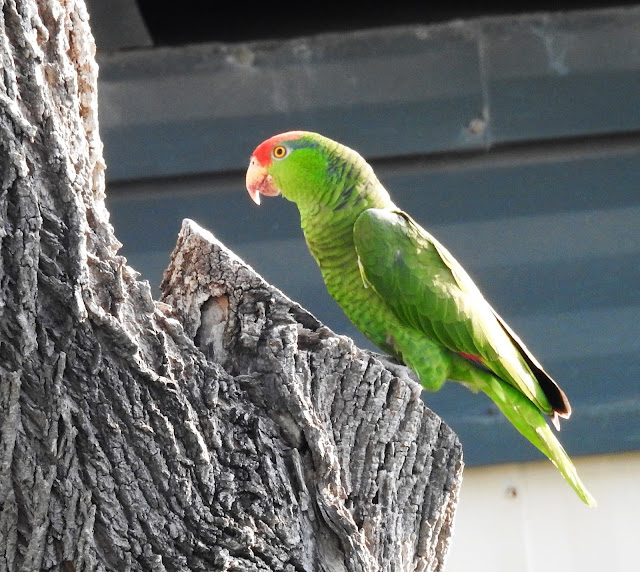 The wonderful places I could go
March 21, 2018 Greene County News Online
~a column by Colleen O’Brien

Mysterious place names across this country – Missouri Breaks, Natchez Trace, Toledo Blade – all coloring my life with a romantic tinge when I was first to read the words. I had an idea what “breaks” were (which turned out to be wrong); a “trace” I figured was a “trail, “which turned out to be almost right; a “blade”? No idea.

At first, it was just the sound of them I liked but eventually, I looked them up to find out where they were exactly, why they were named such.

The Missouri Breaks I thought in a vague way must be somewhere out there in the Rockies where the Missouri River begins, breaking east toward the Midwest. The “breaks” are not that, they are badlands, treacherous terrain, deep chasms, sheer bluffs, prow-like outcroppings, rocky trail intermixed with prairie grasslands and woodlands.

It was buffalo hunting grounds of a dozen tribes with names as romantic as the Breaks – Assiniboine, Ojibwa, Nez Perce. Eventually, some of it was tamed, but much of it remains wild lands and national protected areas. Butting up against the Charles M. Russell National Park, the Upper Missouri Breaks National Public Monument is a “Wild and Scenic River” designation.

I thought for years that the “trace” part of Natchez Trace meant “trail.” But it more precisely means following the “traces” left by herds – bison, deer – that the Native Americans of the area hunted for their livelihood. It became a trail for the Indians eventually, a tried and true path for trading from the Cumberland Plateau to the Gulf of Mexico. The way the animals had made it their trail revealed that it held to high-ground, good-view grazing, with the best odds of not being taken unawares by predators or enemies. The humans, first the Indians and then the Europeans, eventually made it their own and benefitted from the bison “design.”

Toledo Blade, which I’ve known as a roadway in southwest Florida that in my imaginings had a romantic reason behind the name, is just another honoring of the city of Toledo in Spain where strong sword and knife blades have been cast for centuries. And if you’re a newshound, you may be familiar with the newspaper in Toledo, in Ohio USA – Toledo Blade – just another nod to the original old-country city.

Another place name, near Jefferson, in fact, is the M and M Divide, which I had never heard of until I returned to Jeff in 2001 after 40 years in the desert. Had I learned this in school and forgotten? This divide is akin to the Continental Divide in the Rockies, which is the backbone watershed west of the Mississippi River. At the famous western Divide, all waters break there to lead to the coast or to the Plains. The M and M Divide near Carroll, has the same job in our prairie state, for it is the drop-off west to the Missouri River and east to the Mississippi.

It is not just in our country but throughout the world that names of things entice the wanderer. How about this description to whet the curiosity of the traveler, armchair or actual: Lim Bay and Valley is a peculiar geographic feature found near Rovinj and Vrsar on the western coast of Istria, south of Porec, in Croatia. I want to go there because of its “peculiar geographic feature.” Although first, I would like to know how to pronounce the word that starts with Vrs…. Should there be a vowel in there somewhere for us westerners to know how to say it?

The only peculiar thing about the Lim is that one side of the river grows oak and ash trees, the other side pine trees. Is that peculiar? It sounds not especially so to me.

The Great Rift Valley of Africa compelled me to read about it when I first came across the name, thinking that there, surely, a great rift of some kind happened – geological or human. As it turned out, both were true, for it is a 3000-mile-long depression of from 10 feet to 6000 feet of volcanoes dormant and active. It is as well the anthropological treasure trove of the earth where bones of the first humans – little “Lucy,” 3.2 million years old, found in 1974; and more recently, in 1994, an even older dame, “Ardi,” whose bones are 4.4 million years old. Other places on the planet have given up old bones, but not so many as this valley, this once hotbed now boneyard of human ancestry.

I was led to reconnoiter the landmarks of my wannabe wandering past after reading Landmarks, by Robert Macfarlane. This is a book about thousands of words humans have come up with for mountains, hills, crags, and peaks; for woods and forests; for grasslands and prairies; for tunnels and paths and caves; for streams and cricks and brooks. It’s about one’s own familiarity with a place and the enticement our naming has bestowed on the unusual and the mundane of each place, just like what has been done over the decades with our familiar landmarks – Squirrel Hollow, McMahon Landing, Eureka Bridge, Danger Hill . . . words to instill fondness in those who have named the place and remain there to love it; and for those who’ve never explored it.

Perhaps on hearing a name, they will be tantalized with a longing to find it . . . Dunbar Slough or Perkins Prairie.
Posted by Barbara Brooker at 3/23/2018 11:38:00 AM No comments: Links to this post

I share this with you because this is my primary way to clean and has been for many years and low and behold, someone wrote it all down for me. Enjoy!

By Bob Difley
Before buying those high-priced, fancy-packaged, specialized cleaning supplies, try these two items you probably already have in your rig. Even if you don’t have them already, they’re readily available in any grocery store – and you may be pleasantly surprised at their versatility.

What are these magic ingredients? White vinegar and baking soda! Don’t believe it? Try this on your oven – one of the toughest cleaning jobs – to convince yourself. Prepare a solution of 1/2 cup each of vinegar and baking soda with 3 cups of water. Wear rubber gloves to protect your skin and apply with a kitchen towel or sponge. Allow the solution to stand for a few minutes, then wipe off. You will only need to scrub the very toughest burned-on food.

How about windows? Wipe solution on with a sponge then wash off with a hose (outside, of course!) and enjoy your new sparkling, streak-free windows. Use vinegar mixed with 3 parts water (you can vary this mixture based on the difficulty of the cleaning job) for less difficult jobs. Here are some more cleaning tips:

Vinegar
Remove stick-on hooks from painted surfaces by squeezing a few drops of vinegar behind the hook.
Price labels will come off by coating the label with several coats of white vinegar and let soak. After several minutes the label will rub off.
Lime deposits around faucets can be softened for easy removal by covering the deposits with vinegar-soaked paper towels. Leave the paper towels on for about one hour before cleaning. Leaves chrome clean and shiny.
Vinegar removes deposits which clog your metal shower heads and sink aerators. Combine 1/2 cup white vinegar and one-quart water and submerge the shower head or aerators and boil 15 minutes. Or put the mixture in a plastic bag, secure to the shower head with a rubber band, leave on for about an hour, then remove the bag and turn on the water to rinse.
For a homemade anti-fogging glass cleaner try 1 part white vinegar to 3 parts water.
Remove rust stains and hard water deposits by applying vinegar full-strength until spot disappears, then rinse.
Mix vinegar with salt to create a paste for a good surface cleaner.
Remove stubborn hard water sprinkler spots and streaks on glass with undiluted vinegar.
Clean teapots by boiling equal parts of vinegar and water for several minutes and let stand an hour. Then rinse with plain water before using the tea kettle.
Baking Soda
You can cut the amount of chlorine bleach used in your wash by half when you add 1/4 cup to front-loading washers and 1/2 cup to top-loading machines.
The baking soda will also make your clothes smell clean and fresh.
Dissolve 4 tablespoons baking soda in 1-quart warm water for a general cleaner.
Use baking soda on a damp sponge to clean and deodorize all kitchen and bathroom surfaces.
A paste of baking soda and salt will clean baking dishes – enamel, ceramic and glass – and coffee stains from cups or countertops.
It is a great soap scum remover.
For sluggish or clogged drains pour 1/2 cup baking soda down the drain. Add 1/2 cup white vinegar and cover the drain. Let sit for a few minutes, then pour a kettle of 6 or more cups of boiling water down the drain to flush it. The combination of baking soda and vinegar breaks down fatty acids into soap and glycerin, allowing the clog to wash down the drain.
Posted by Barbara Brooker at 3/19/2018 07:44:00 AM No comments: Links to this post