Our Angel...I am missing her! 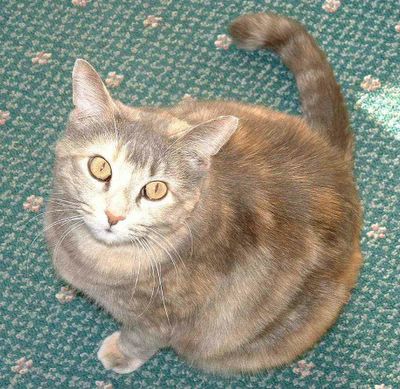 I have had to take some much needed time off from having fun to tend to chores...like laundry...defrosting fridge...and today our monthly stack of mail came from our mail service. I have snuck a little fun in between. Friday afternoon I went to the pool hall and played with the ladies. It had been awhile since I had been there. We didn't take it seriously.
Posted by Barbara Brooker at 2/12/2005 02:12:00 PM No comments: Links to this post

This was sent to me by...Tailspin...Thanks, Ray
Of interest to Iowans:
1913 car made in Grinnell comes home
Now just a pile of parts, the Spaulding will be rebuilt for the new transportation museum
Fewer than 1,500 Spaulding automobiles were built in Grinnell between 1910 and 1916, and the only one known to exist is coming home to Iowa.

Don't expect to see the vehicle cruising the gravel roads of Poweshiek County anytime soon, however. The 1913 model car is no more than a few baskets of rusty parts being purchased for $12,000 from a car collector in Joplin, Mo.

Over the years, the vehicle had been converted into a wrecker, and then it was disassembled for use as a stationary power plant.
"We have about 60 percent of the original vehicle, including chassis, engine, drive train, a set of wheels, a pair of doors and other miscellaneous parts," said John Swanson, executive director of the fledgling Iowa Transportation Museum. The museum, which is acquiring the parts, is under development in Grinnell in buildings that once housed the Spaulding Automotive and Carriage Works.

The old Spaulding automobile's body, fenders and most of the interior will need to be fabricated before the car can be restored as a fully operational vehicle, Swanson said. He hopes to have the auto rebuilt by experts and put on display within about two years at a cost of $75,000 to $100,000.
Spaulding automobiles - 1,481 of them - were manufactured in Grinnell in the years before World War I. The Spaulding company was founded in 1876, and during its peak years, the Iowa factory produced 10,000 horse-drawn vehicles annually. The firm went out of business in the 1920s.

It once was common for automobiles to be manufactured in Iowa. Statewide, about 100 different types of cars have been produced, mostly prior to the 1930s, said William Johnson, a curator for the State Historical Society of Iowa in Des Moines.
Among Iowa's carmakers were brothers Fred and August Duesenberg, who built their first car, the Marvel, in Des Moines in about 1904. They eventually moved to Indianapolis, where they made luxury custom cars considered the most expensive in the world.

"The Spauldings were a very fine automobile, but they just didn't have the buyers," Johnson said. "Iowa didn't have a great population and they weren't doing a very good job of marketing, and other companies were far ahead in getting started."
The Spaulding parts are being sold by George Gagle, 58, a Missouri collector who owns 27 antique vehicles. He acquired most of the parts after they had changed hands several times among other rare car collectors.

Because different models of old automobiles often contain many similar parts, such as Timken axles and Rushmore headlamps, Gagle said it would be acceptable to use certain parts from other vehicles when restoring the 1913 Spaulding. He has been on the lookout for such interchangeable parts, although several years ago he obtained a pair of authentic Spaulding automobile doors from a seller in Forest City.
"I asked the guy if he had any more of the car than the doors and he said, 'No,' that was the only thing he had," Gagle said.

The delivery of the Spaulding parts, which is expected within a few weeks, will fulfill a dream of the founders of the Iowa Transportation Museum, said Gerald Schnepf of Des Moines, the museum board's president. They have scoured the country looking for old Spaulding automobiles, but they aren't aware of any others that exist.
"I think it's important to preserve these pieces of history," Schnepf said. "To me, this is a symbol of how we can show the real challenges of restoration, everything from metal work to woodwork, to painting and cloth work." 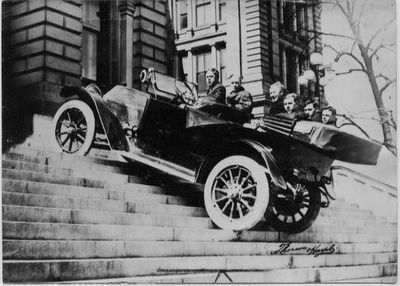 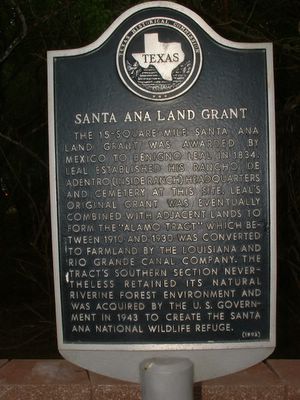 The well worn path to the Rio Grande River within the Santa Ana Wildlife Refuge. 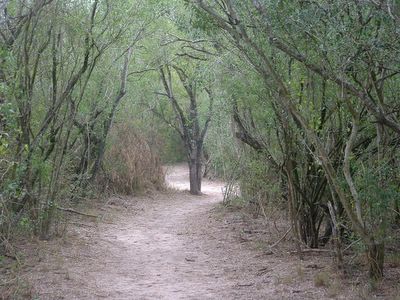 This is the changing room upon departure from the river. We saw two border patrol fellows on bicycles patroling the park. They have a never- ending thankless job. 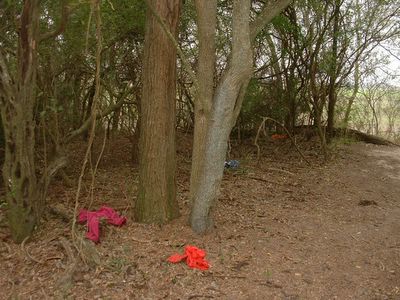 This is a flotation device used to navigate the river. 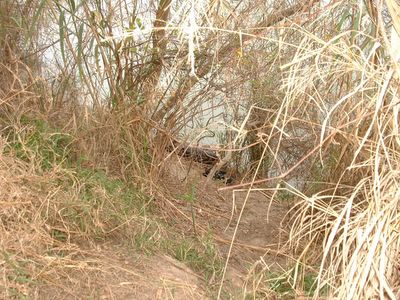 Yesterday the Magnolia Bikers went to the Santa Ana Wildlife Refuge to ride. This is the Rio Grande River where it was clearly visible where the 'illegals' entered and exited the river. 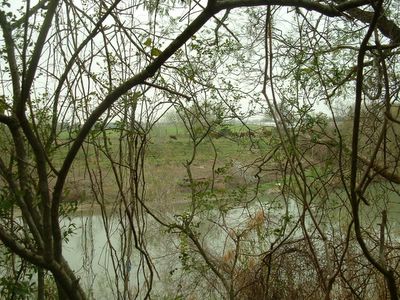 Here is Butch's panchos. What makes them panchos, instead of nachos? The tomatoes, onions and refried beans. 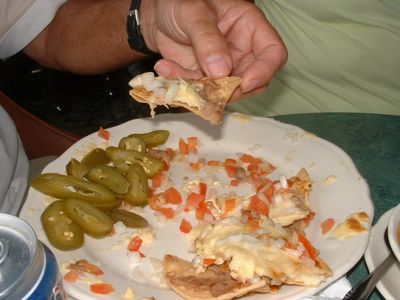 This looks like a wild bunch...not sure what happened with this photo 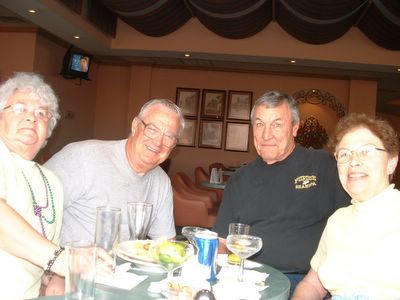 We went to Mexico today. Butch wanted a haircut and I wanted some nachos and a margarita at Garcias above the Canada Store. 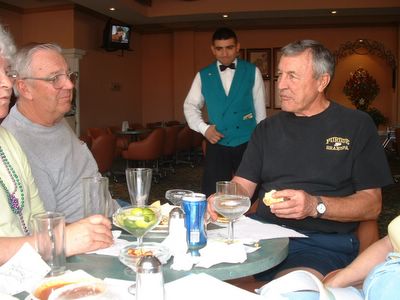 I happened to get a head cold

late Saturday. There are a few of you who know that really ticks me off! I do not have time to be laid up with a cold. Well, I did the Zicam number as soon as I felt it coming on and I am mucho better this evening. Butch and Bill are tied up with a water heater. I am sure they hope to be finished very soon.
Posted by Barbara Brooker at 2/07/2005 07:32:00 PM No comments: Links to this post