As we get older, time runs faster, so we must do things sooner. Wishing you all a very Merry Christmas.
Posted by Barbara Brooker at 12/22/2016 07:30:00 AM No comments: Links to this post

Marlene and Bernard came over and we ganged up with Bill and Kay Stilson along with Peggy and made our way south. Bill and Kay always drive in because they go to the south part of Progreso to our favorite pharmacist, Hector. So the Kelley's and the Stilson's drove in while Butch, Peggy and I parked on the US side as we usually do and walked down to Hectors. I swear it is over a mile, maybe closer to two! It was well worth the trip. Prices were less than the last time I went down. Marlene said a bottle of eyedrops she buys in the US for $180 were $29. And the prescription I buy that are $150 with insurance are $63 this trip. They were $71 last time. Peso and inflation...
So we all went back to Elsa's for Panchos and Margarita's. We always look forward to that stop. Just as we were getting ready to leave Kay realizes she has forgotten their passports! So after a bunch of angst it all turned out okay. Their drivers licenses sufficed this time. They did a bit more checking but it all turned out well.
You all should come with us. We have a really good time.
Posted by Barbara Brooker at 12/21/2016 09:25:00 PM No comments: Links to this post

We winter in an old park so things are old. And every so often an issue arises that can be directly related to old age and sewer problems is one of them. It is usually a short-lived issue and we get on with it. However this time it has risen to be a bigger problem, one that might include a backhoe and several feet of pipe replacement. They have found quite a large section where the pipe has collapsed.
Dottie, the manager, knocked on our door this morning and asked if we needed to dump our black tank and yes we do, so she has suggested we move the RV to another site and so we will. It should be short term but one never knows. This a reasonable request but naturally is more than we want to deal with on a cold and windy day. Butch thinks perhaps we could move the MoHo, dump our black tank and then return to our spot since we can go about 5 days between dumps. Surely it will be repaired in 5 days time, I say hopefully. So we are thinking we can do this tomorrow. Another complication will be that until we are back in our usual spot we will not have an internet connection. I can take the Chromebook up to the library but for me, that will be a last resort.

And now on to the weather report... I know it is lots colder up north so my sniveling may fall on deaf ears but Damn! it is cold outside. The front came through at 3:50 am. How do I know that you might ask? It was 70 degrees outside when we went to bed at 10:00p m so we had the window open and the fan on and when the front came through at about 20-30 MPH it was noticeable. Over the next hour, it dropped to 43 degrees outside and 63 inside. So I asked Butch to turn off the AC and put it on heat. I could do it but I am too short and cannot see the controls without getting a stool. Easier to ask Butch. So this cold spell, the second of the season, is supposed to ease up by Wednesday and I certainly hope so!! Hunkered down once again so we are watching The Crown on Netflix learning a great deal about English history. Next summer at Trivia night we hope to be a force to be reckoned with. Except they will ask us a question about the Simpsons that none of us know one thing about. 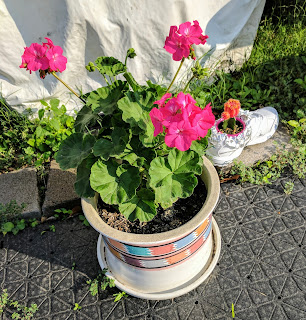