Kitten has gone home and other stuff.

The kitten's human daddy came last night and took the kitty home. I now know where she lives so if she comes to visit the trail again I will leave her be.
We are beginning to get our heads set for taking off in the Motorhome. It is approaching that time of year. I kept a haircut appointment this morning and afterwards we were discussing my next one when it occurred to both of us that it would be way too soon to get another before we take off.
It is a rainy morning so it will most likely be an inside day. That will turn thoughts in a southerly direction faster than any other thing as well.
Butch and I have been listening to "The Potato Factory" by Bryce Courtney on audio in the car. We finished it on a ride home from 209 Main, the new restaurant in Paton Iowa. So our next book will be the sequel, "Tommo and Hawk". We are anxious to get to it because we enjoyed the first one very much. There is nothing like a good listening book to inspire you to get on the road.
Here is what 'The Potato Factory ' is about:

"Always leave a little salt on the bread...

Ikey Solomon's favorite saying is also his way of doing business, and in the business of thieving he's very successful indeed. Ikey's partner in crime is his mistress, the forthright Mary Abacus, until misfortune befalls them. They are parted and each must make the harsh journey from thriving nineteenth century London to the convict settlement of Van Diemen's Land.
In the backstreets and dives of Hobart Town, Mary learns the art of brewing and builds The Potato Factory, where she plans a new future. But her ambitions are threatened by Ikey's wife, Hannah, her old enemy. The two women raise their separate families, one legitimate and the other bastard. As each woman sets out to destroy the other, the families are brought to the edge of disaster."
And our next adventure is the sequel " Tommo and Hawk":
"Brutally kidnapped and separated in childhood, Tommo and Hawk are reunited at the age of 15 in Hobart Town. Together, they escape their troubled pasts and set off on a journey into manhood. From whale hunting in the Pacific to the Maori wars of New Zealand, from the Rocks in Sydney to the miners' riots at the goldfields, Tommo and Hawk must learn each other's strengths and weaknesses in order to survive.
Along the way, Hawk meets the outrageous Maggie Pye, who brings love and laughter into his life. But the demons of Tommo's past return to haunt the brothers. With Tommo at his side, Hawk takes on a fight against all odds to save what they cherish most. In the final confrontation between good and evil, three magpie feathers become the symbol of Tommo and Hawk's rite of passage."
I am an www.audible.com member and it is one of our entertainment indulgences. I like it because you can be a member for only a month if you so desire. So I usually rack up a few books I wish to listen to and then suspend our membership until we get low on books again. If you start listening to a book you do not like, you can return it with no questions asked. You never lose your books once you purchase them. They are always available to you. I am sure I have more than 60 in our audio library.

Puffballs    You’ve never made so many cookies so good so easy. If your RV oven has only a single rack, this big batch will take several trips to the oven.  That's part of the fun when you make these cookies on a rainy day and invite the campground neighbors in for cards.  1 egg1 box cake mix, any flavor1-quart carton of whipped topping, thawedPowdered sugar or coarse sugar    In a mixing bowl whisk the egg until it’s light. Stir in the cake mix with a fork , then use a spatula to fold in the whipped topping until the mixture is evenly moistened. Form the dough into walnut-size balls and roll in sugar. Place on parchment-lined baking sheet(s) and bake at 350 degrees 8 to 10 minutes or  until cookies are firm, puffy and crinkly. Makes 3-4 dozen Puffballs.


Gleaned from the RV Newsletter

And the joke of the day is:

Found her daddy! She will be going home tonight at 6:00 PM and we are ready! Having a kitten around is as challenging as a small child at times. Also can be quite fun but I am ready for the fun to be over. I have let her in the house today...because I KNOW she is going home tonight so the pictures you might see on here are all ones taken after I got confirmation she was going to her forever home.
She has been a good girl as kittens go. She does not bite and stops whatever she is doing when she hears "No". But she has taken out both my earrings and I have a toe injury because she is so fast making it through an open door. She would also love to surf the Internet but I have put my foot down on that. 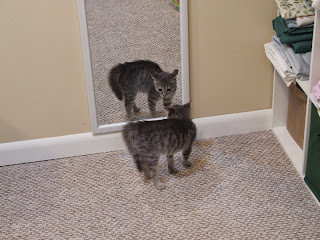 She thought she was the only animal in the house until she spotted this intruder. She stared her down for a long time. 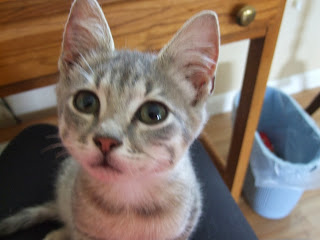 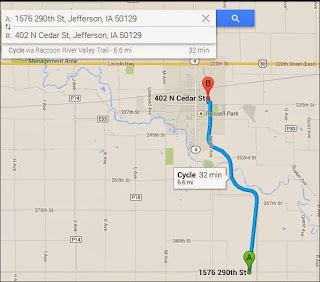 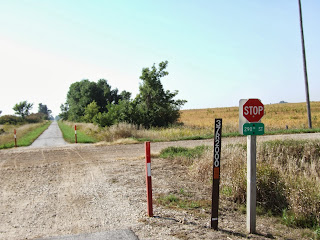 This was today's destination for a total of 13.2 miles and after I turned around I was thinking I may have bit off a bit too much but it was soon okay.

On the ride out a kitten was on the trail and quickly scurried into the brush. I assumed it was a feral cat.

I was wrong. More on that later. 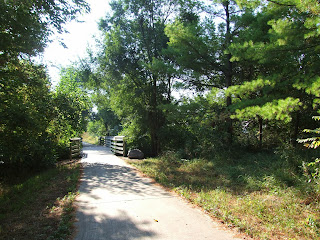 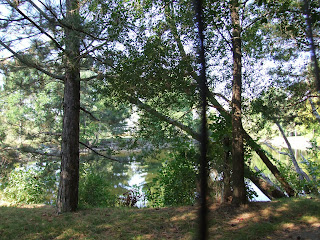 Daubendiek Pond- This is not very visible in mid-Summer. More so now. 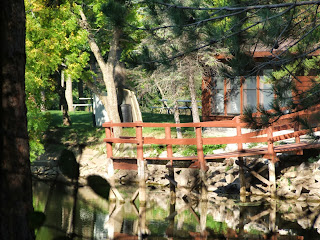 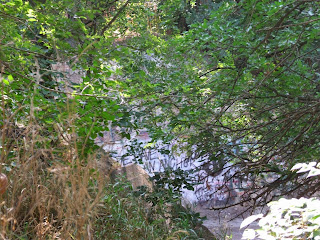 Graffiti below the bridge...years of graffiti. 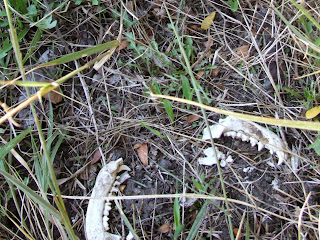 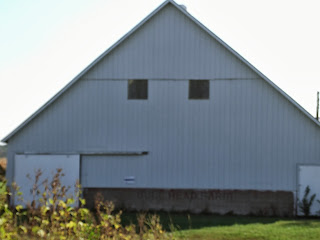 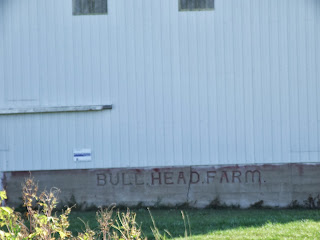 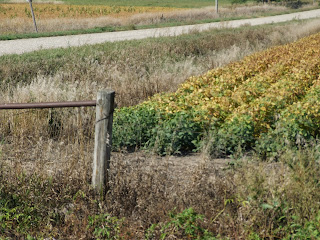 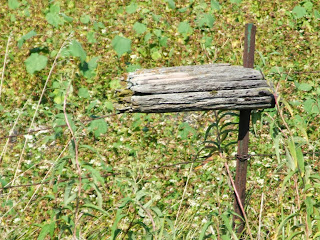 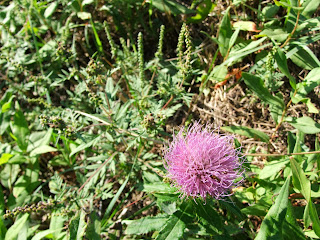 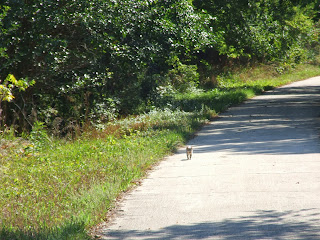 Kitten running after me for the 2nd time!

I know...I should not have stopped...but I did. 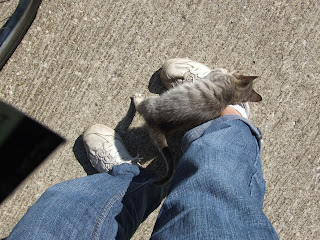 Very friendly little thing...so I put her in my bike bag and she rode quietly home with me. I called PAWS. They returned my call and said it may be a couple of days before they can take her off my hands.  She is in the garage-sleeping on the mower seat. Very happy to be there even. Will not let her in the house. Sure wish Chet and Irma lived next door so she could make their acquaintance. They are even softer-hearted than I am. And this little sweetie deserves good people. 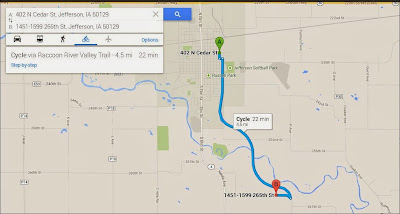 Google maps have upgraded and new things are possible. I snipped this to show you my ride this morning. 9 miles total- some of it with light rain. The walnuts are dropping so care is needed in some locations. I thought about clearing the trail in a few spots but then it started to rain. That is my story and I am sticking to it. The blue line is the actual bike trail. Cool,huh?
Butch is golfing and Jason called while I was on the trail saying he planned to join his dad golfing so I suspect to see them soon now.

Elise has a tea party 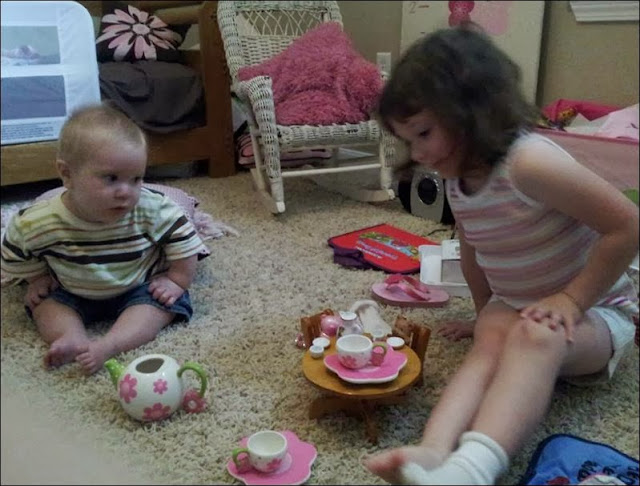 Butch has been industrious the last week or so. He has worked on the dirt pile in the back yard, putting some water to it so it could settle. Washed and waxed the Moho with some help from me but not a great deal. Helped our friend Russ install some tube lights out to Leo and Keri's. I think he plans to go golfing today.
I have cleaned house. Big deal, it takes me an hour and half-TOPS! I have rode my bike a time or two and plan to do so as soon as I finish this. I invited my sisters, cousins and nieces for a visit yesterday afternoon and we had a great time. Loved every minute of it but once again had so much fun I forgot to get pictures. Darn!!

I have played around with my new Samsung Google Chromebook. So far the only snafu has been getting pictures off my camera. It is because my camera is old that I cannot do it directly. My XD card from my camera will not fit into the SD card slot on the new computer. My work around so far is to put them on my Toshiba, login to Picasa and upload them to Google plus. Then when I go to the Chromebook they are automatically there. I understand that there will soon be an app for direct picture transfer from a camera but not yet. So it is really not a big deal. It could be if the Chromebook was my only computer. But you know me well. I will find a way around this. One of my options will be to put them on a USB drive but as you might guess I need the Toshiba to do that. And another way is to email them to myself. My goal will be to make the Chromebook as stand alone as possible. I am up to the challenge.

Saturday on my bike ride I took some shots of the pampas grass alongside the trail. I think it is beautiful stuff. My problem is that I do not know which of the five pictures is the best. I like them all. So I will put all five of them on here. Will you please email me on which of the five you consider the best shot? I would greatly appreciate it. 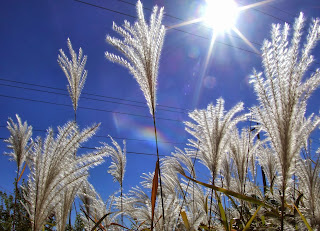 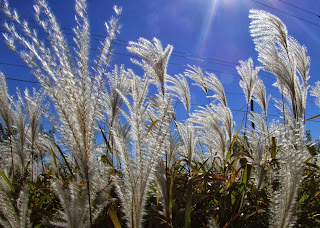 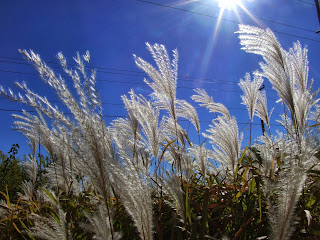 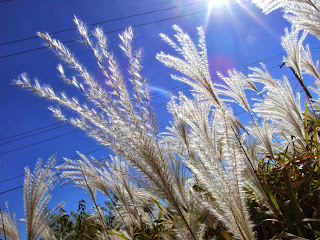 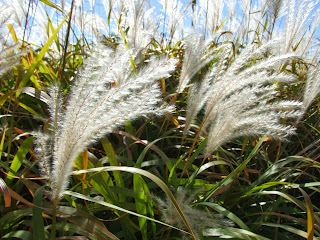 We drove out to Leo and Keri's so I could see the new tube lights. And this is what Keri had been up to. 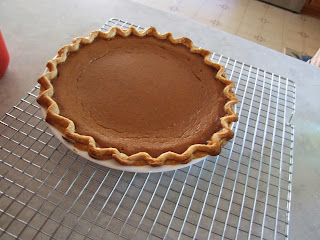 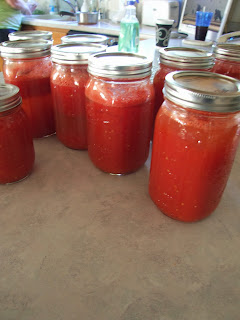 This morning I awoke to this beautiful sky! 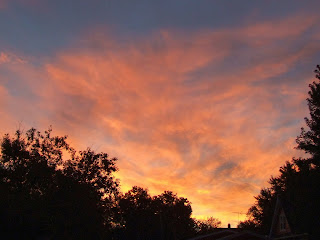