We are getting settled in for the season. We will have our high-speed Time Warner connection tomorrow. The park wifi works, but it can be real touchy. I think it is very dependent on how many people are on. I have no patience for lousy connections.
Peggy and I made a Costco run today. We had great fun getting caught up with all the funny stuff that has happened during the summer. We are anxious for the third side of the triangle (Kay Stilson) to get here on Thursday. It always seems our sense of humor matches and busts us up all at the same time. Laughing keeps you healthy.
Peggy and I have been getting two mile walks each day, one in the morning and one in late afternoon. I had been remiss for the past week so it feels good to get it started again. Butch comes with us now and then. 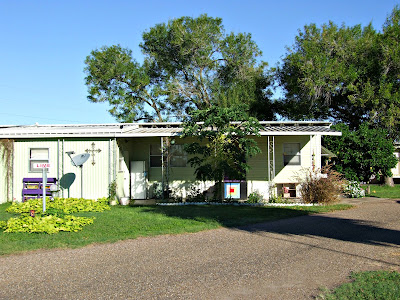 Jim and Kay Voss have a beautiful straight growing papaya tree in their yard but it is a male.
Until they get a girl they will not be getting any papaya. 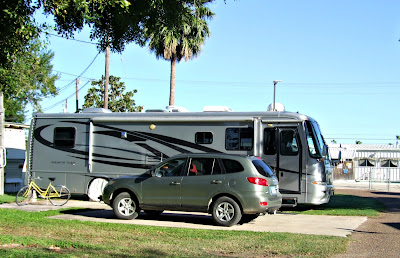 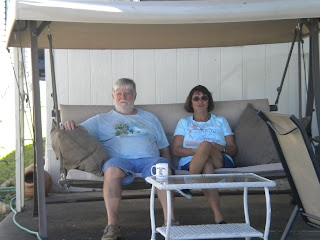 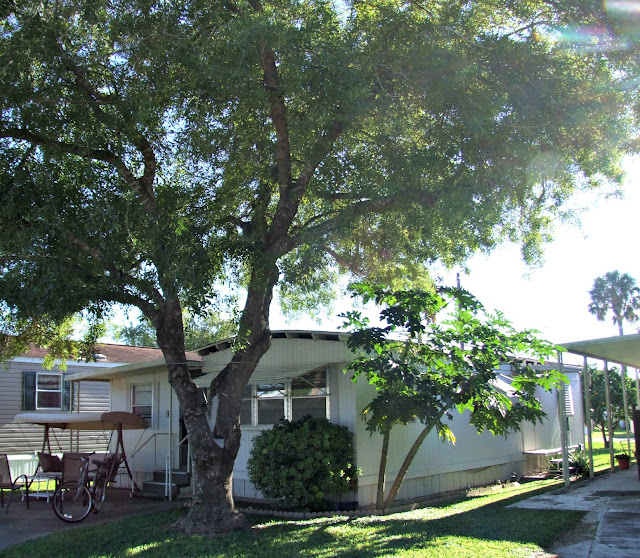 Donn and Peggy Gordon residence where Mr. Papaya is on the left and Mrs Papaya on the right. I asked our resident papaya expert, Chet how will we know they are ripe. He said we had to harvest them as soon as any yellow shows up to save them from the birds but then we are to wait until they look spoiled before peeling, seeding and chopping the fruit. I am ready for a nice juicy papaya! 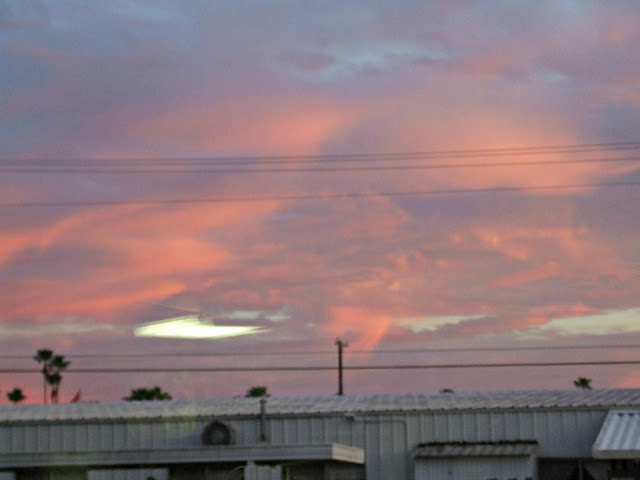 Last season when Donn and Peggy came back to the valley they planted two papaya trees. We have a papaya expert in the park, Chet Johnson. Chet must have 20 papaya trees in his yard. He says papaya trees are sex specific and you need a male and female tree. So the Gordons planted two trees and hoped for the best. This season this is what they found upon their arrival. 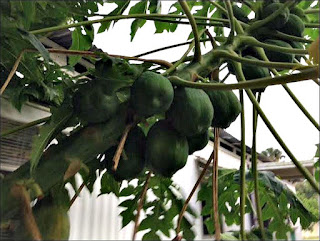 All this growth happened in one year!

Book of the Southern Travel 2015

Sunday, 10/25/2015
We had a slow start on our first day. The alley was clear so that was not the problem. Our Brake Buddy would not show us that it was working, as the indicator apparatus that is in the motorhome would not light up. We could go without it but it really is better if it is working. For the uninitiated a brake buddy hooks to the brakes on the car and there is a connection to the motorhome so when Butch applies the brakes on the motorhome the brakes on the car also activate assisting in stopping both vehicles. It can be a great thing. Many drivers do not realize how hard it is to get that much weight stopped. It is very foolish to pull in front of one of these big boys and hope they can get stopped in time to prevent your death. So Butch decided to take the indicator apart that is with us in the motorhome and see what was wrong. A wire was loose so he tried to solder it but it was too short and would not hold. So plan B became to go without it. We do not have much elevation to go through so we weren't too concerned that we had to unhook it entirely. We would keep it in mind, stop sooner and drive slower. BUT then we went a few blocks and realized something was not right with our car hook -up. One of the pins in the tow bar would not pop up meaning the car was not tracking properly behind us. So we finally corrected that after quite some time parked in front of the Extension office.  So at 9:05 AM we left Jefferson for parts south.

Written on 10/26/2015
We are staying at the WinStar casino in Thackerville OK at Exit 1. In other words, we are almost in Texas. Not sure that is a good thing, considering all the water they have been blessed with. You will be reading this far past the day written because the casino has really sucky WiFi. With a players card, the rate through the week is $21.00 and if you are getting a players card for the first time it is free. You and your mate will want to get your player card at different times and then you can get a free night on two different occasions. $21 is a good rate.  I wish the WiFi was good and then it would be a super deal.

It was a good travel day. Sunny and warm.

Canyon Lake experience:
Written at 7:45 AM. 10/28
We are going through a very scary experience right now. We are in the Walnut Canyon RV Park in Canyon Lake and experiencing a torrential rain. It has been raining since 3:30 AM and much of that time so hard and so much water it is hard to take in that it is happening. We are parked next to a ravine. I started to call it a creek but most of the time it is dry so it doesn't really qualify as a creek.
I watched as water rose around us moving so fast if I had stepped out of the RV I would have been swept away. It was still dark so made it difficult to see how bad it really was. It is getting lighter now so we are starting to see. I was scared and woke Butch up, all the time knowing there was nothing we could do but sit it out.  In the midst of it all a tornado warning came on our phone telling us to take cover. Again there was nothing we could do. The rain has let up some now, but the small river is still at full speed. It is supposed to rain all day. I am hoping not with the intensity of the last two hours. Do not worry about us. There are much smaller RV's all around us and none of them have moved at all. I wanted to capture the experience as it happened and writing about gave me something to do.
One of the miracles of it all is that the Internet is working. It didn't work at all for the entire day yesterday. Phone service is really bad all the time and still is, however, the tornado warning came through loud and clear.
8:01 AM It is letting up now and the creek is within its boundaries with little rivulets still draining into it. 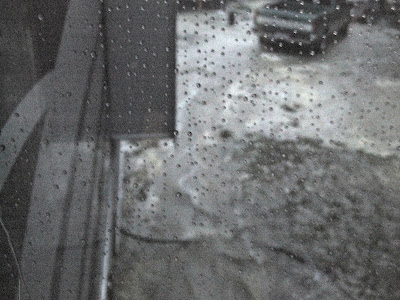 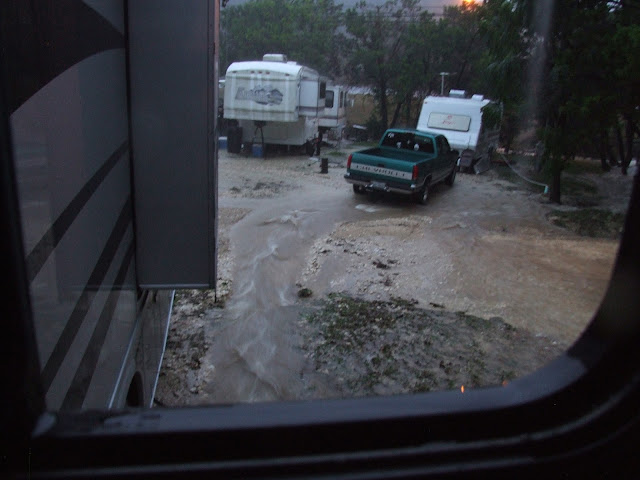 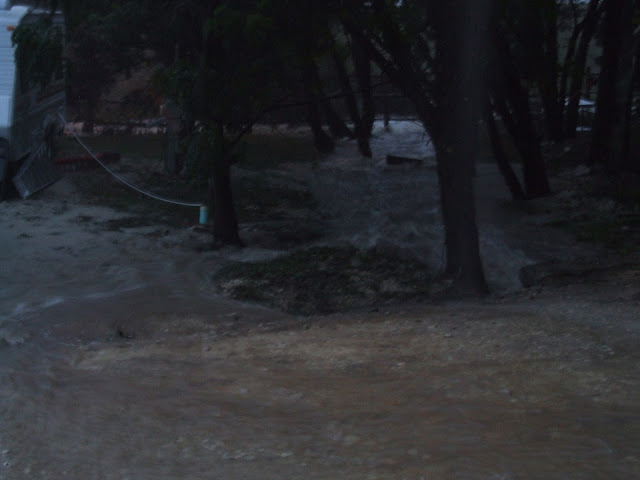 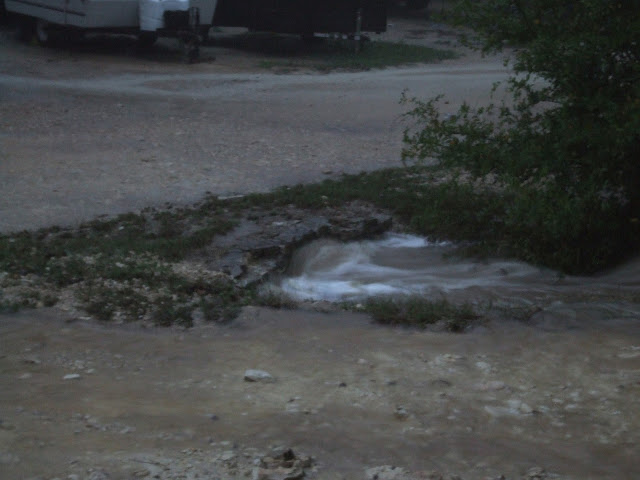 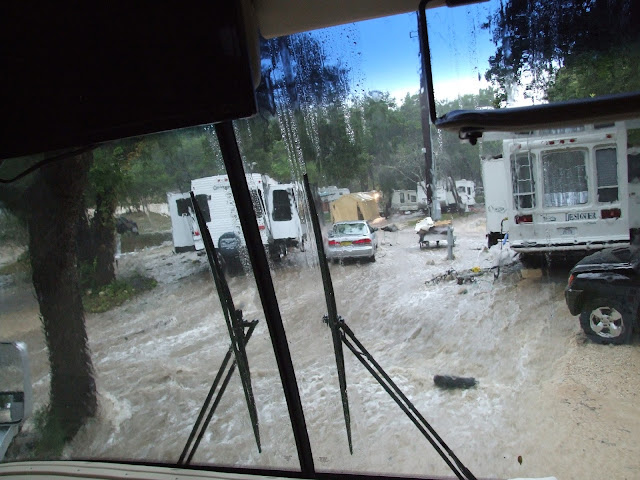 October 31, 2015
I have not been as far 'off the grid' as they say for this long ever in my memory. No Internet, No phone for several days now. When we first arrived we had Internet, but it was spotty. But now it has been a totally blank page for at least two days. so I write anyway with the knowledge that when we leave here and get to the valley my chances of posting improve and it should not take long to get a reliable connection with a phone call and some money.
Yesterday and part of the previous day were not fun ones. We were very close to the major flood event north of San Antonio. They told us on the news (we did have TV) that we had another episode of heavy rain and flash flooding to get through last night. So when it started raining about 2:00 AM my eyes popped open and it did rain heavily for an hour or so but nothing compared to the previous night. The flash flood threat is supposed to end at 9:00 am.
One of the differences from here and central Iowa is the earth itself. We are sitting on rock here. With this much rain back home the ground would be mush and driving on it could not be considered for a week or more until it was completely dried out. But here they were driving on it throughout the heavy rain without sinking out of site or even making a noticeable mark. It pays to know the terrain and its qualities.
The driveways and RV sites are rutted terribly, but it is the result of fast moving water. So when we leave here tomorrow morning it will be a bumpy ride until we get to pavement. It isn't a long distance but I plan to batten down the hatches or things will fly all over as we rock and roll to the entrance.

Last night we met with a few of our Canyon Lake friends at the legion for burgers. Lisa told us of her harrowing day driving the school bus. They finally cancelled school after a two-hour delay. It should never have been started in the first place! Lisa picks up her first student, an elementary student at 5:40 AM. He arrives at school two hours later. She said he brings a blanket and pillow and sleeps for those two hours. Their bus routes cover 547 square miles. And that is what it is on a regular day. Yesterday was not a regular day. She was picking up or trying to pick up special needs kids. Many streets were blocked by barricades, water, or both. She said she has never been through such an experience in her life and never wants to again.
We hope to be on the road headed for the Rio Grande Valley as soon as possible in the morning and put this experience in our memory bank.

Today's trip matched our first three travel days-sunny, warm and trouble free. We thought our start might be a bit rough because the streets of the park were so rutted from the storms. Mark, the park owner worked much of Saturday smoothing them out the best he could so it was a bit bumpy but not any more so than it usually is.
So we have arrived at Magnolia park in Donna Texas and will be here till Spring as usual.

Our Snow Mountain friends Terry and Lisa came to visit us and our tiny home this past summer and have wanted a situation similar to ours  and have been looking for a long time. Well, their opportunity all fell into place shortly after they returned to the Canyon Lake area. They bought a house and Terry had a heart attack all at the same time. It has all turned out beautifully. Terry has his health and they have their dream home on private land near their friends and family. They would like to put a couple of RV sites on their land like we have on ours so next Spring we will be spending enough time with them to get that done. And then if we are lucky that will be our stopover spot to and from the valley. I didn't get nearly the photos I planned to get because of the rain, but I did get a few before all hell broke loose.
Their place has a Texas ranch look to it with many special touches. 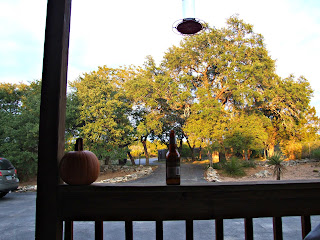 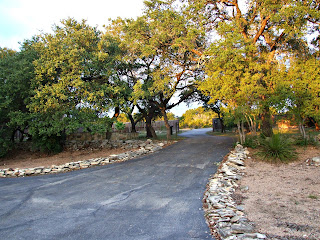 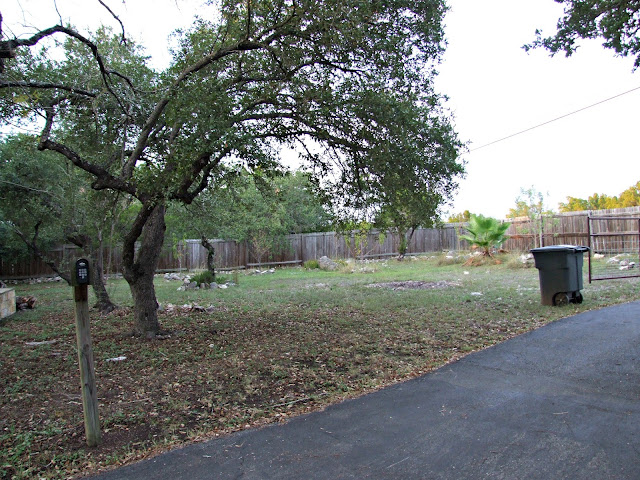 This is the area where the RV sites will be. Some trees and other obstacles may have to be sacrificed. There is plenty of room for two RV's. 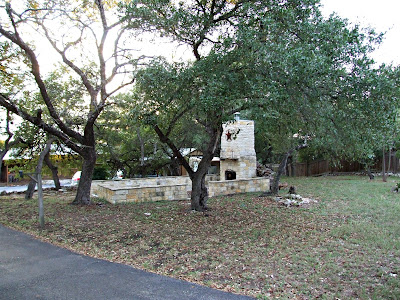 This is a very impressive fireplace. Terry built the first fire in it on Saturday night and it was a typical good time with our Canyon Lake friends 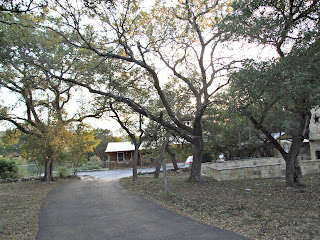 I was standing near the entrance and looking toward the house in this photo. 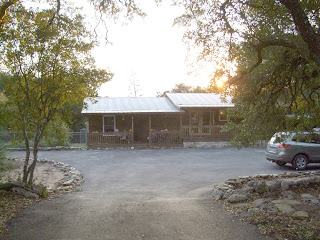 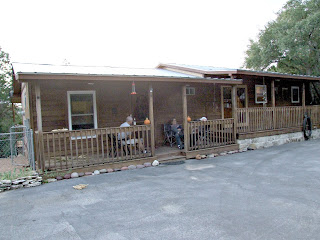 Below is a garden? on the left side of the house. There are elevated and rock-lined flower beds 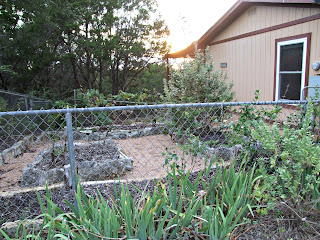 This is the front of the "Ranch House" with the shop in the background. 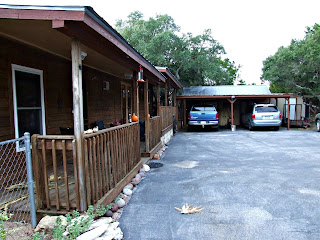 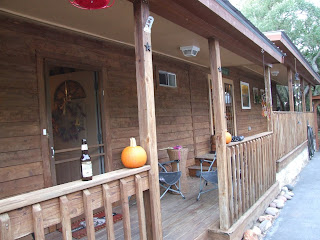 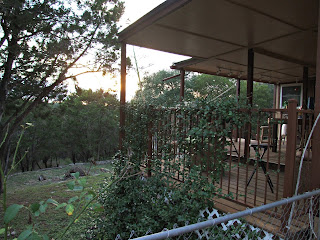 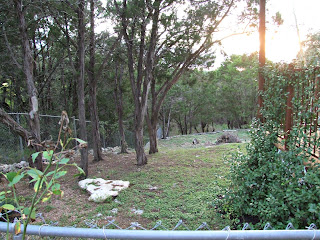 Very steep backyard with lots of rocks and little grass. Mowing would not be necessary if you were not inclined. 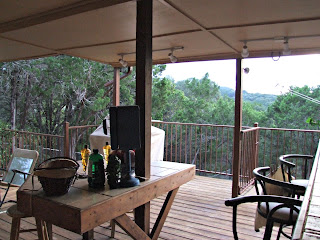 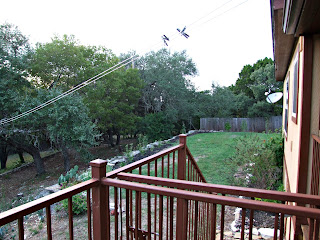 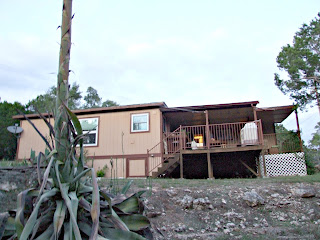 Back view of the house from down the hill a ways