When I am too old to get my hiney up on the seat of my favorite bike I will want one of these. 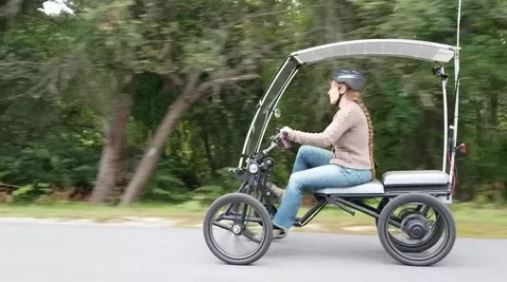 This is from the RVtravel Newsletter. Butch and I read this every day. This news is a surprise to us. The owners of our previous park (Magnolia RV Resort) should pay particular attention to this sentence, “I would say 99 percent of our Winter Texans are here because they heard about us from somebody else,” Collier said. “Word of mouth is the number one driver of new traffic to the Rio Grande Valley. "
We have always been supporters of the RGV and the park we were in. Cannot with good conscience do that anymore.
Barb

The bad news is that household spending appears to be significantly down from the previous season, though officials are not sure why.

About 144,000 Winter Texans came to the Valley that year and had been steadily dropping for nine years.

“The cities were not marketing the Valley for 20 years because of budget cuts and everything else,” said Penny Simpson, the survey’s author.

“Our Winter Texan parks have the best resources when it comes to marketing outside the Valley,” said Kristi Collier, whose website, Welcome Home Winter Texans, serves as an online concierge for winter visitors. Collier believes local stakeholders also had a hand in driving the turnaround.

“I would say 99 percent of our Winter Texans are here because they heard about us from somebody else,” Collier said. “Word of mouth is the number one driver of new traffic to the Rio Grande Valley. Still, we are actively working on an ambassador program to educate our residents how to get involved in other (marketing) opportunities up north and spread the message of the Rio Grande Valley and how great it is to winter here.”
Posted by Barbara Brooker at 11/10/2018 09:47:00 AM No comments: Links to this post

Butch and I went over to Magnolia Wednesday afternoon and for the most part, people are optimistic. I certainly hope their optimism pays off. I truly do.
I think I did too much on Wednesday because Thursday I felt like crap again. It did get better as the day progressed but still do not feel like my old self. That is why I have not been timely with adding anything to the blog.

The weather forecast last night was rather gloomy. We have a series of cold fronts coming through in the next week or so, like a train about every 3-4 days. So we are going from humid and 90's to fighting to get out of the 50's in the daytime and staying around that for nighttime temps as well.🙁

The temps have dropped over 10 degrees in the past hour since sitting here. From 76 degrees to 66 degrees. So here is how I see it. We have been holed up for over a week with not feeling well and temps in the 90's and freakishly high humidity to temps in the 50's, rain and the furnace running. I pray for some moderation in all things!!
Posted by Barbara Brooker at 11/09/2018 09:46:00 AM No comments: Links to this post

Butch was grilling and called me out to see this big bird. So, of course, I did get a picture of it. It was probably 50-80 yards away. I do believe it is a Harris Hawk but I am relying on my friend Deon to verify for me. 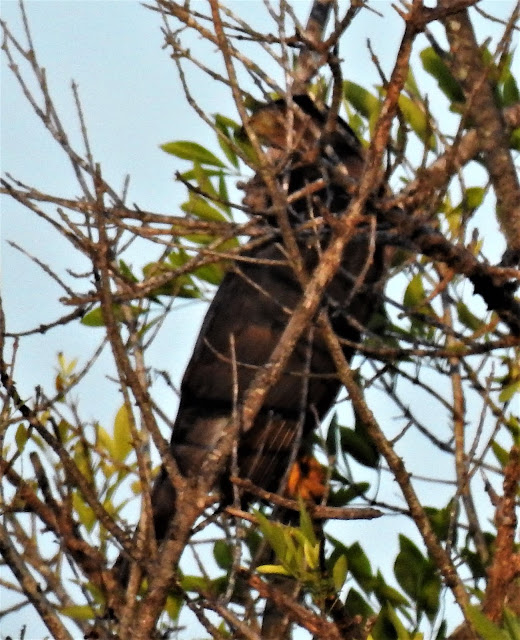 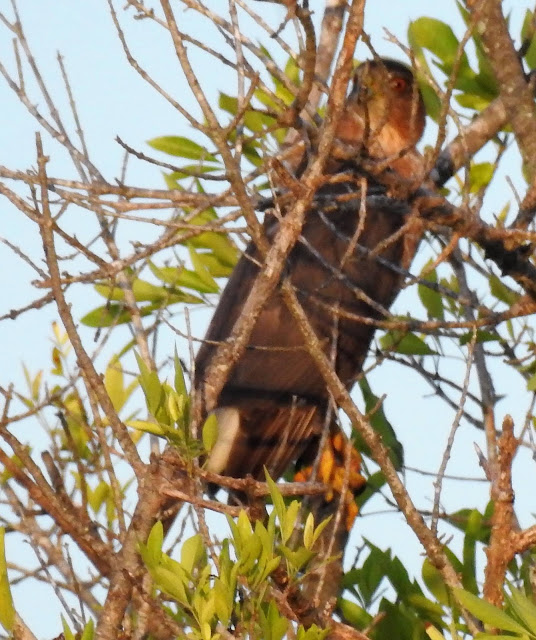 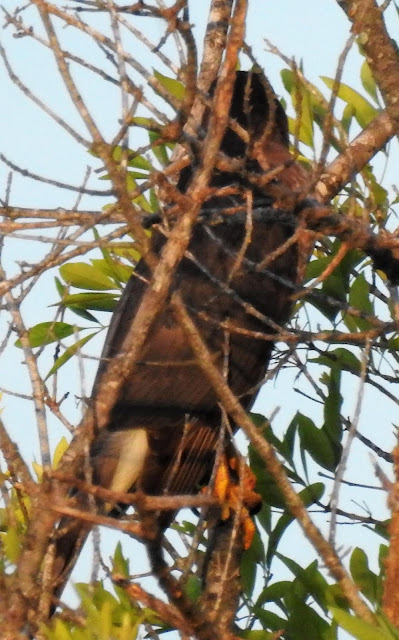 Butch and I have had antenna only for at least  7 maybe 8 years now. In Jefferson, we have a roof antenna we bought for about $100 because our signals were at least 50 miles away in some cases. With the motorhome, we also have a roof antenna. I think they call it a Jack. I was looking through the tips page I have on this blog and ran across this post that is still pertinent today so I am reposting it. Even if you do not need it for practical purposes it is interesting nonetheless. 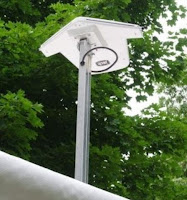 Going old school for TV
On more than one occasion we have been asked about how we get by without satellite or cable TV. I found this website that would be very helpful for anyone considering it.

Before determining what type of antenna you will need, find out how far away you are from the TV stations you want to watch.

I used this site " www.channelmaster.com/Antenna-Selection-a/134.htm" to get an idea of the stations close to me. I soon realized that most of the stations were 43 miles from my location. In total, I had around 29 channels at my disposal.

What I loved about this site is that it gave me feedback about the signal strength for each channel in relation to my location. Also, it recommended the location of the antenna for the best channel reception.

Up from the depths

Saturday the cold hit me full force and I felt like I might die. Sunday I knew I would live but still felt like a miserable lump. Butch and I binge watched Ozark. I don't know how many episodes we watched but it was more than six for sure. Binge watching Ozark was the most energy I could muster. And this morning is a little better than yesterday...so far. Let's just say I did not feel like sitting in front of my computer and if you know me at all you know that is not a good sign. But here I am back in front of my computer. Things are looking up.