Cumberland vet works with area farm critters, pets
by Jo Arn
Published: Wednesday, February 11, 2009 8:46 AM CST
Dr. Gregory Schmitt, D.V.M., of Cumberland presented a "Veterinary Medicine" video program for residents and guests of Allen House on Thursday afternoon. He recalled treating some of the farm animals and pets of several Allen House residents' through the years, and the audience enjoyed visiting with him about those days.

In fact, Dr. Schmitt took over the Cumberland Vet Clinic from the late Dr. Ray Denham in February 1986. Denham's widow, Helen, is a resident of Allen House and was there to visit with Schmitt.

A graduate of Iowa State University in 1979, Schmitt received his DVM degree and was employed from June 1979 to February 1986 by Orange City Veterinary Clinic, P.C. of Orange City. .

He grew up in Marne, the son of Elmer and Shirley Schmitt, and graduated from the Atlantic High School in 1973. Schmitt and his wife, Karen, were married in 1975. They now live in Cumberland, where he has his veterinary office and also owns an acreage near town where he raises a few cattle. The couple has five children: Megan, Teri, Jedediah, Marielle and Levi; and one grandson, Colby.

Schmitt's main patients are cows and calves, but he also works with hogs, sheep, horses, and pets. The friendly vet works out of his office a block off Main street, where Teresa Stender serves as secretary, and Richard Swain is his assistant. The hours are long during calving time which starts in February and lasts until May.

When an auction is held at Massena Livestock Sales, Dr. Schmitt is there to help with the transfer of all the data needed in the identification of the animals being sold. USDA tags are used to identify animals at the sales barn. Brands are not used much in the state of Iowa as they are used in the western states for identification of animals.

Dr. Schmitt remembers one client who brought her dog into his office. The dog was having urinary problems and the client was describing what she had been doing to "help" the dog because it was leaking urine. She put a pair of her undergarments with a sanitary pad on the dog so it wouldn't make a mess all over her house(the client was very sincere about the actions she had taken to help her dog.)You can only imagine the energy it took to keep the outbursts of laughter held in.
Posted by Barbara Brooker at 2/12/2009 07:20:00 AM No comments: Links to this post

This is a somewhat long story and most likely only of interest to Swedish weavers.

I saw a lady Swedish weaving on a piece of
what she called monk's cloth she had purchased at
Wal-Mart. She said she had shopped at
Wal-Mart, Hancock Fabrics and JoAnns looking for
monks cloth and they told her
that was monks cloth. It looks nothing like any
monks cloth I have ever seen before. The squares
are not distinguishable as squares and if that is
monks cloth of the future my days as a Swedish
weaver are limited. She said she would never do
another afghan with it either. They told her at
Wal-Mart that the manufacturers had changed it.
This lady has done several afghans but was sure
this would be her last unless she could find some
"Real" monks' cloth.

I wrote to my supplier and asked her about it and she doesn't know of any changes other than the selvage being a little funky.
So to see a really good picture of it the best place is this blog as you can click on the picture to get a really good close up. 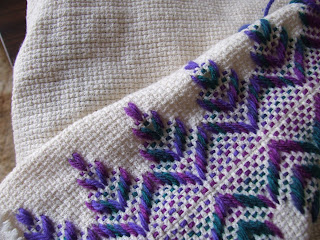 Click on the picture for a close up. Reva said she had to decide if she was going to weave in the top or the bottom part. 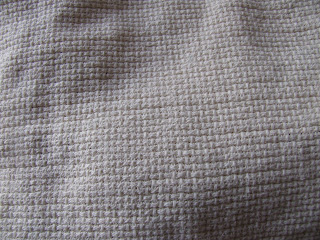 It has been a long road with what people call the "Texas Crud". Sinus drainage, constant tickle cough, sleepless nights etc. But after three long weeks I can finally say it is a past experience and I definitely plan to take more precautions next year.
Feeling such as I was I didn't have the inclination to take many pictures but I have managed a few. It felt rather strange but I didn't spend much time on the computer at all throughout the past 3 weeks...But I AM BACK!!!
We have friends here from the Canyon Lake Texas area and it has been a fun and busy time. Last Friday we went to "Ropa Usada", used clothing in Spanish. It is quite the experience, a local thing that has to be seen to be believed. 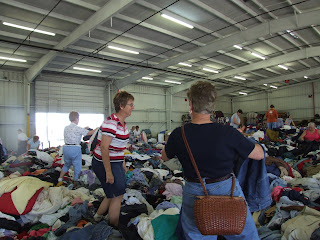 Here we have Roxie and Lisa looking over the pile. They enjoyed it so much they plan to go back today.
Posted by Barbara Brooker at 2/09/2009 07:19:00 AM No comments: Links to this post