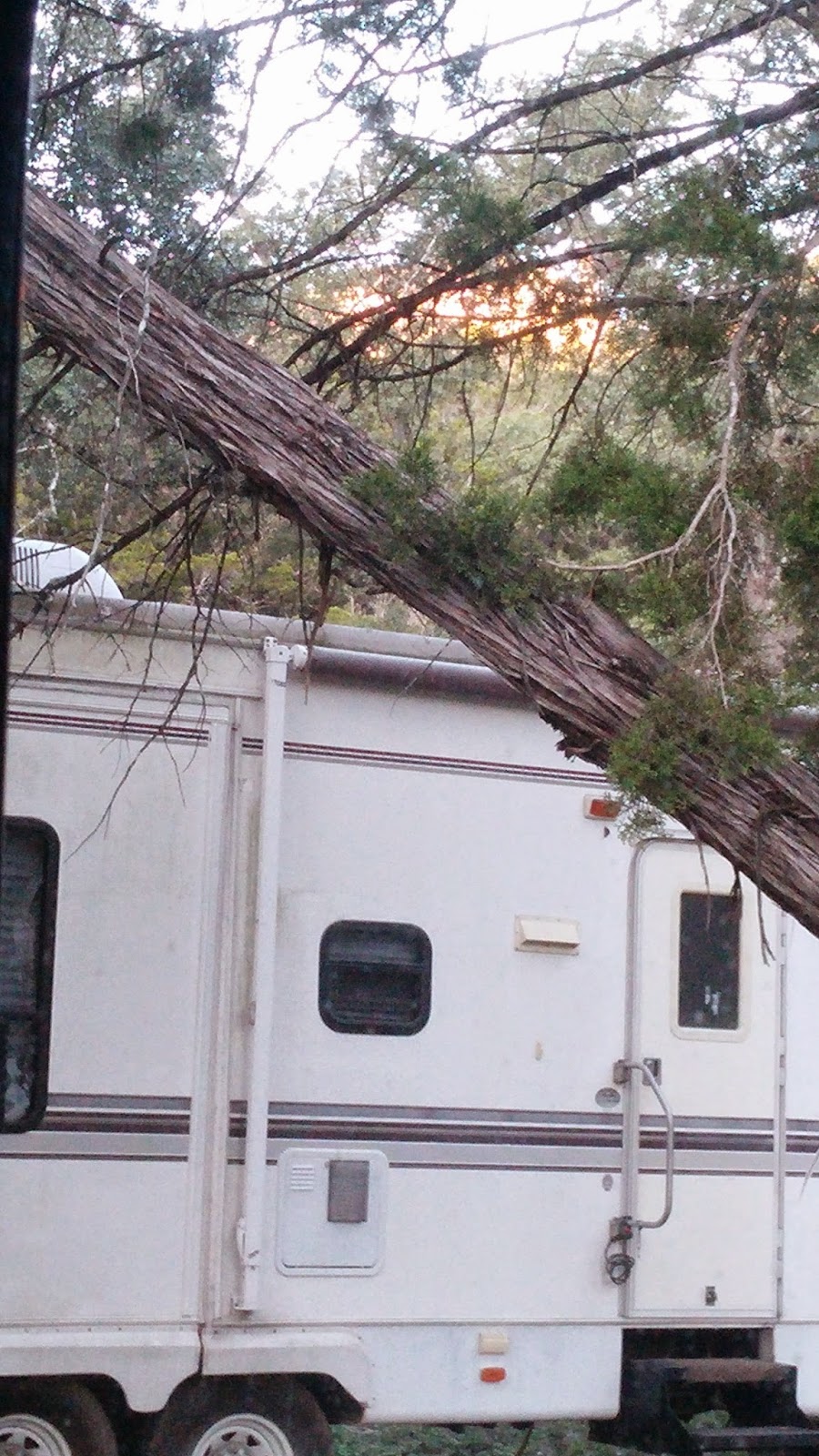 This is the early morning view from my sitting place in the motorhome. The sun lands on the house at the top of the canyon ridge before it lands on us. A side note is this RV went out of the park today. The fellow was the disagreeable sort and most people were happy to see him go. We have been here a week and today when he was leaving was the first time I saw two dogs that were in this RV the entire time. These dogs never set foot outside this RV for a full week and my guess is that was true for a much longer period of time. Just knowing that was enough for me to be glad he is gone.

The church that our Canyon Lake friends are associated with have a Country Bazaar every November. These are some of the tables full of bargains. 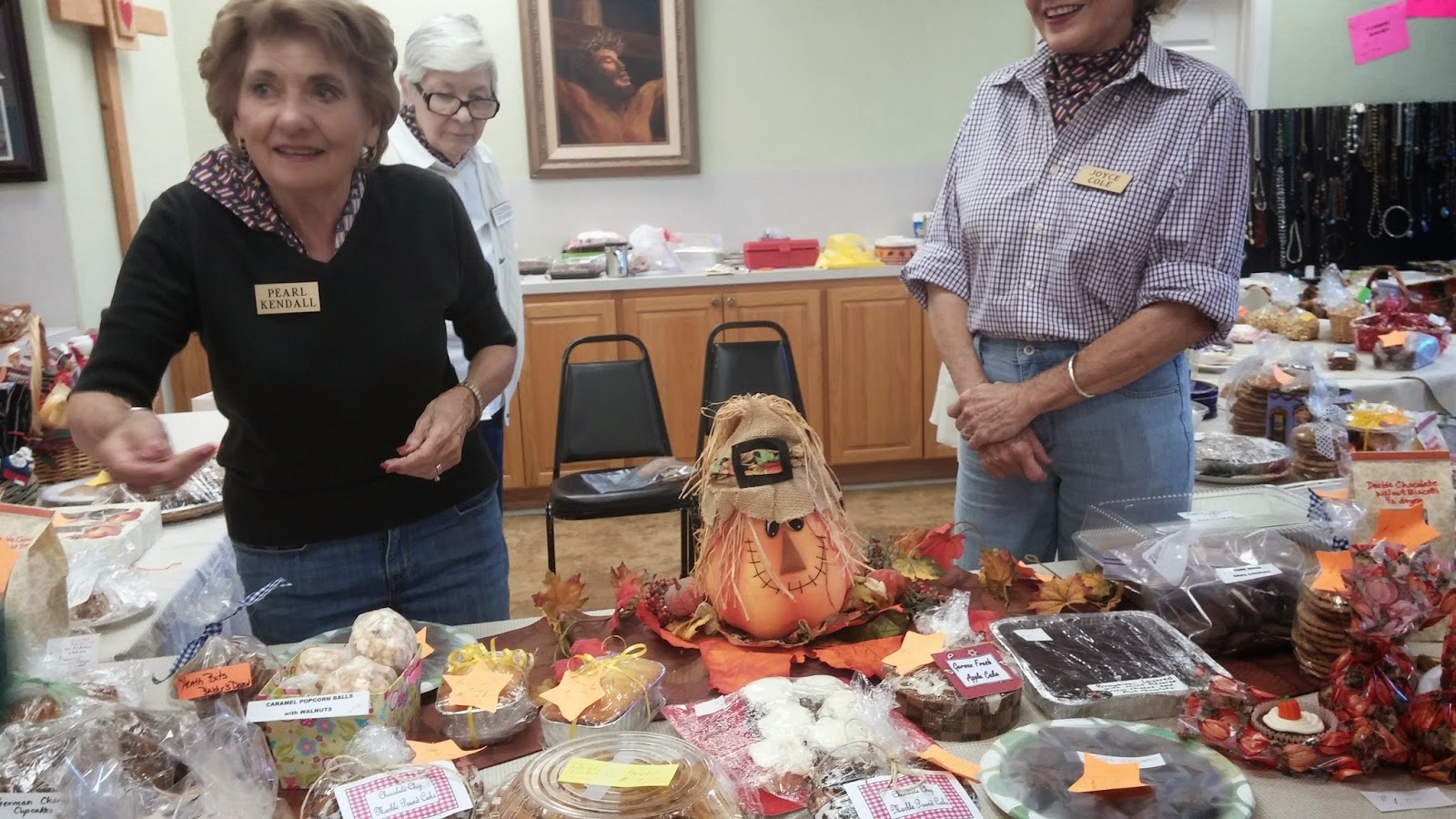 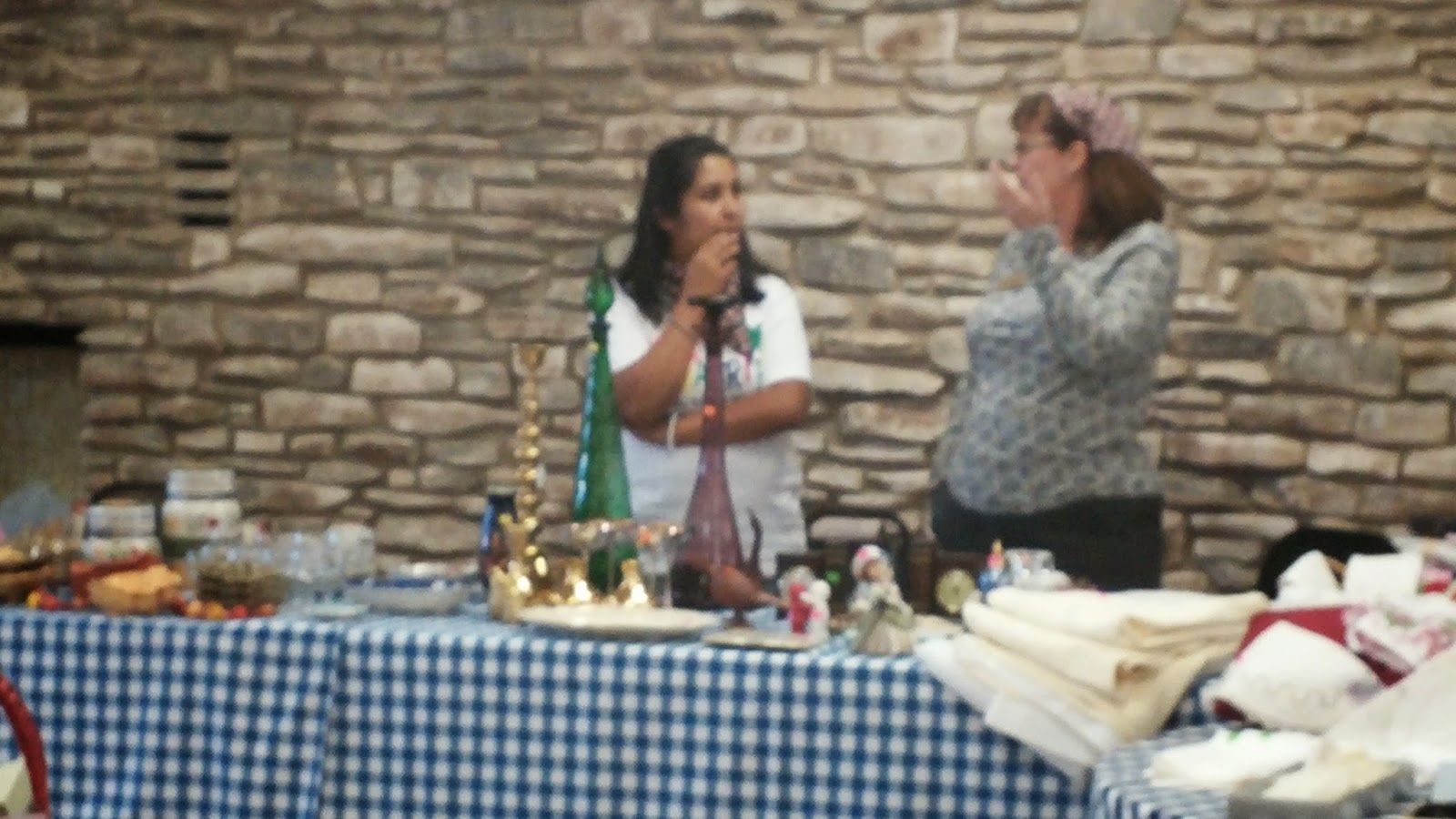 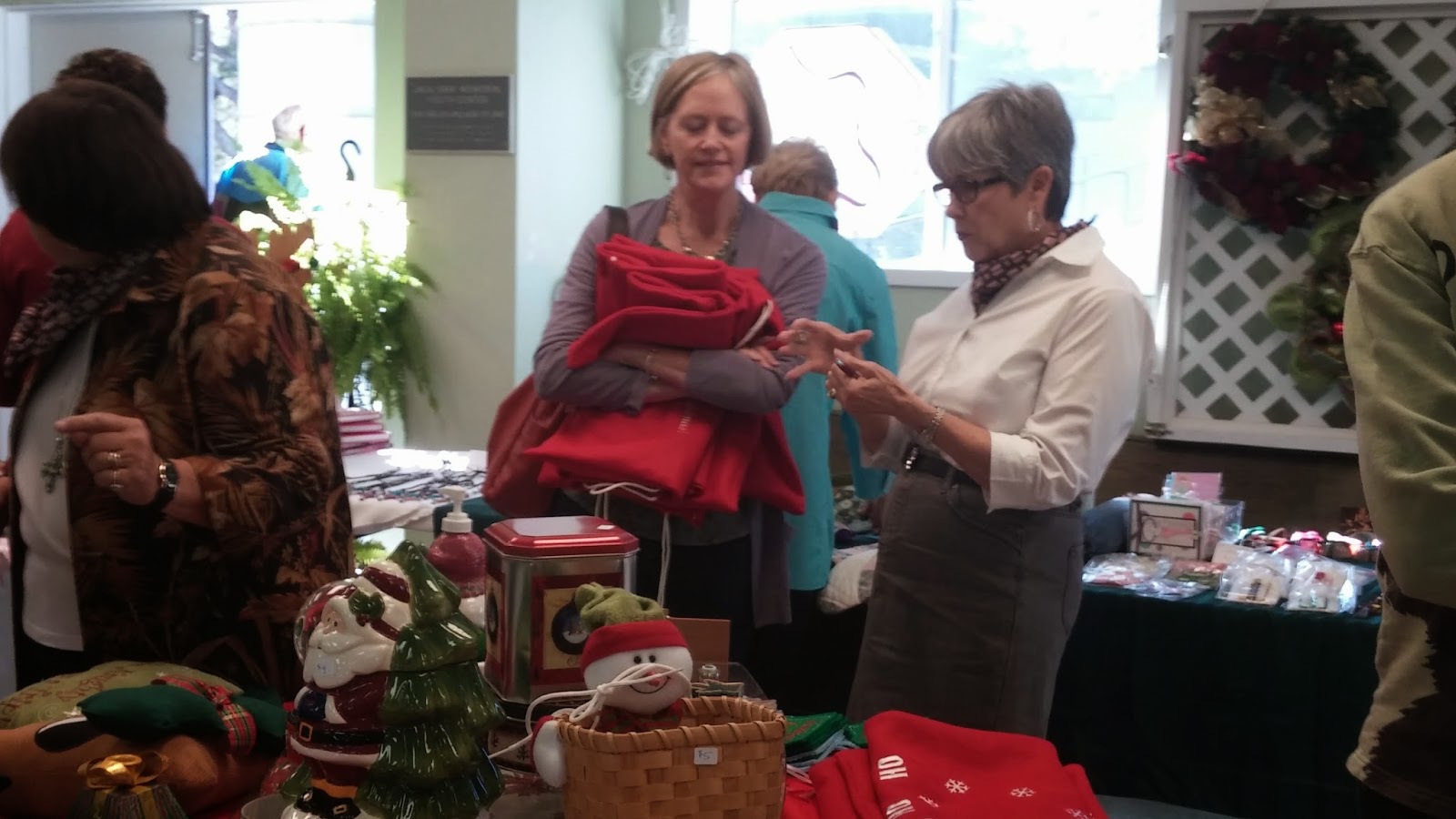 This tree outside the church gets some added support. 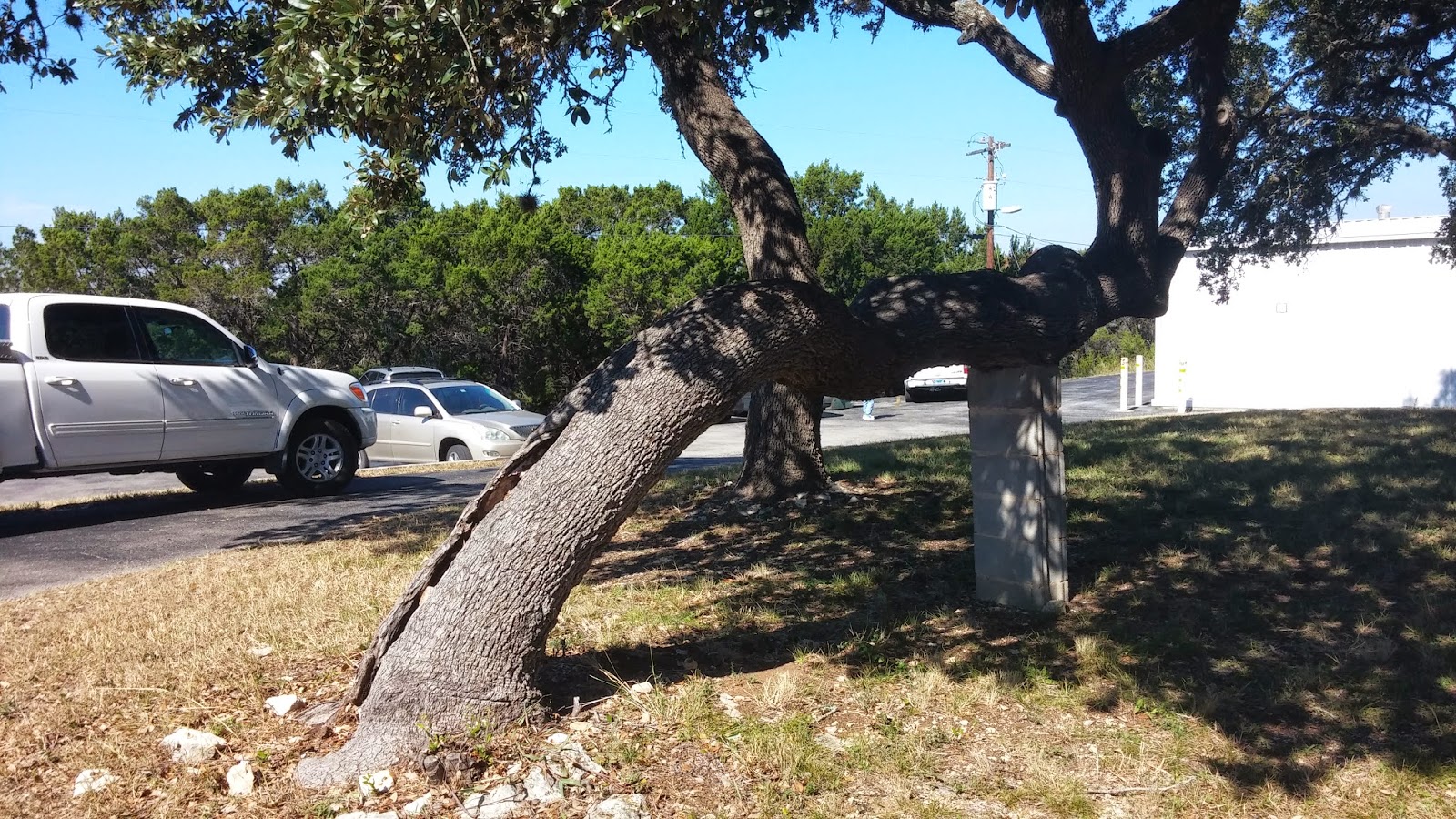 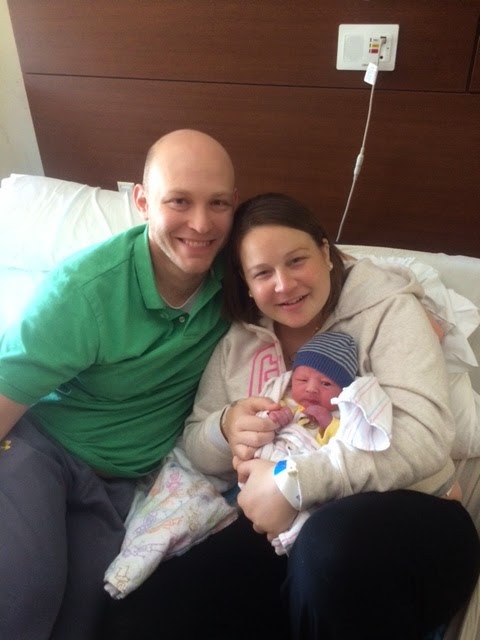 Joe and Emily welcomed Jorgen Matthew Davis into their family this morning (November 1, 2014) Leo and Keri have another grandson! 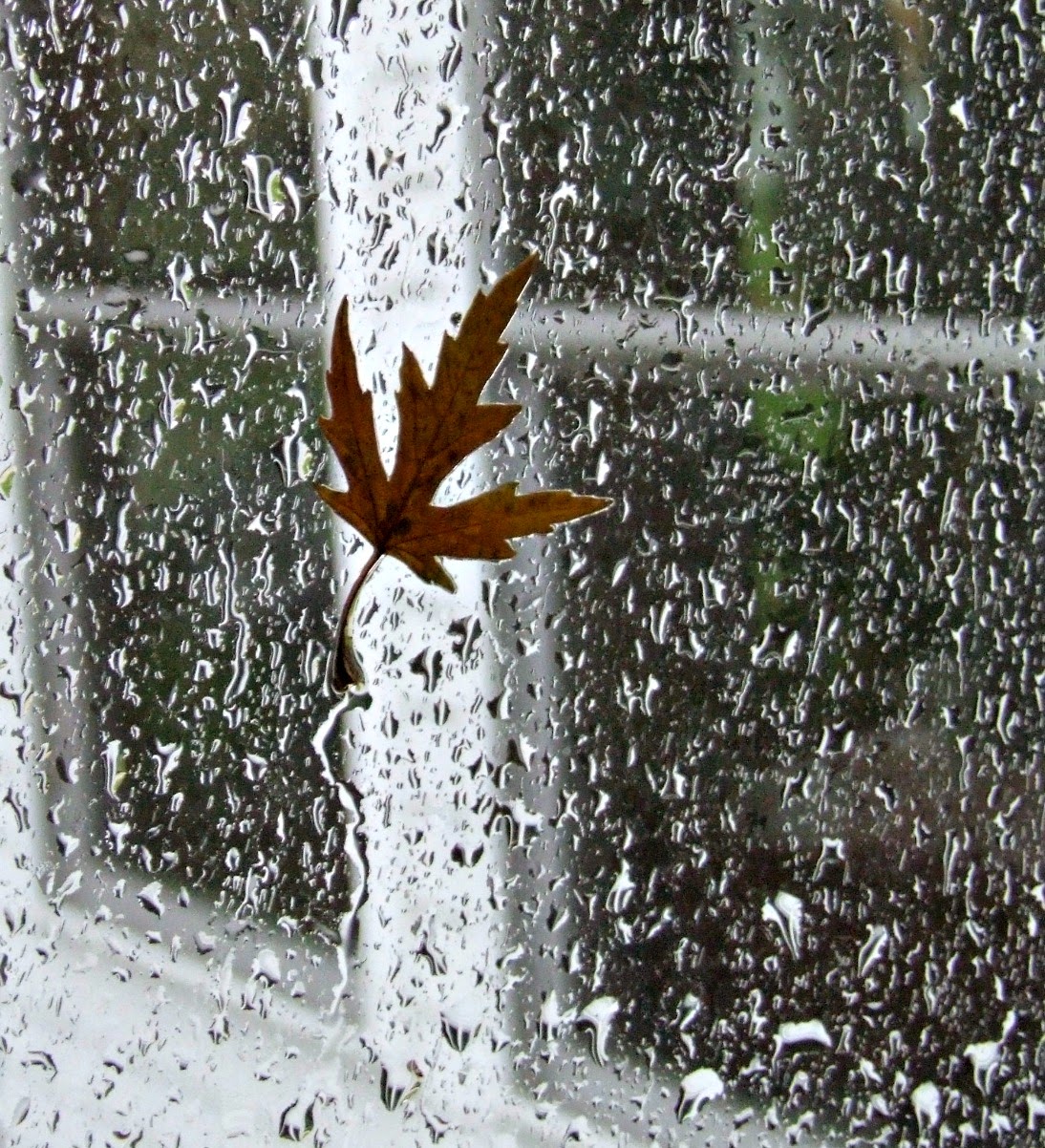 Taken on a rainy day before we left jefferson

We are in a tiny microcosm and it is very interesting. This park is mostly made up of people you would find in a small town neighborhood. But they cannot or choose not to own a house. Some are full time Rvers such as we were for 11 years and our lifestyle could still be considered if not full time at least half time. So some here are retired, some are unemployed at least to the naked eye. I am guessing some are disabled or trying to be. And we are told one is a college student. Since he never leaves the house he must be doing online classes.And some leave every morning to go to work and come home in the evening only to do it all over again the next day , same as we all did for years. They all live in tiny houses called Rv's.  All in all it is an interesting place to observe humanity. They all seem like nice people doing what they have to do to get along. The park owner is throwing a "do" tomorrow at 4:00 for all of us to get acquainted. I can see the smarts in this. When everyone knows their neighbor it creates a bond and yes, I believe this is a good thing. You are more likely to work out a problem, if you have one ,when you know your neighbor. Are we likely to become best buds with the majority in here? Probably not but it never hurts to say hello or even help someone out if you can. In the meantime it is like having a second TV and watching all the drama and the comedy unfold around you.
Another interesting side note to this place is that we are right beside a busy highway but you would never know it. The entrance is not easy to see right away and is easily missed. Trees obscure the fact this park is even here. So we are not an easy crime target. Also it is one of the darkest parks we have ever been in. Consider that it is in a canyon and we are out in the country at least theoretically and the only lights are from the RV's themselves and not everyone lights up their place. I think I only see two who do have some rope lights strung about and that is low key lighting. It is the only time I wish I had brought along our nightlight. Just as I wrote that I remembered we have some accent lights we never turn on. Wonder if we should?...So we turned on some accent lights we haven't used in the 10 years we have owned this rig. I think we may use them tonight. might as well!
Here are a couple of simple but beautiful shots I have taken recently. 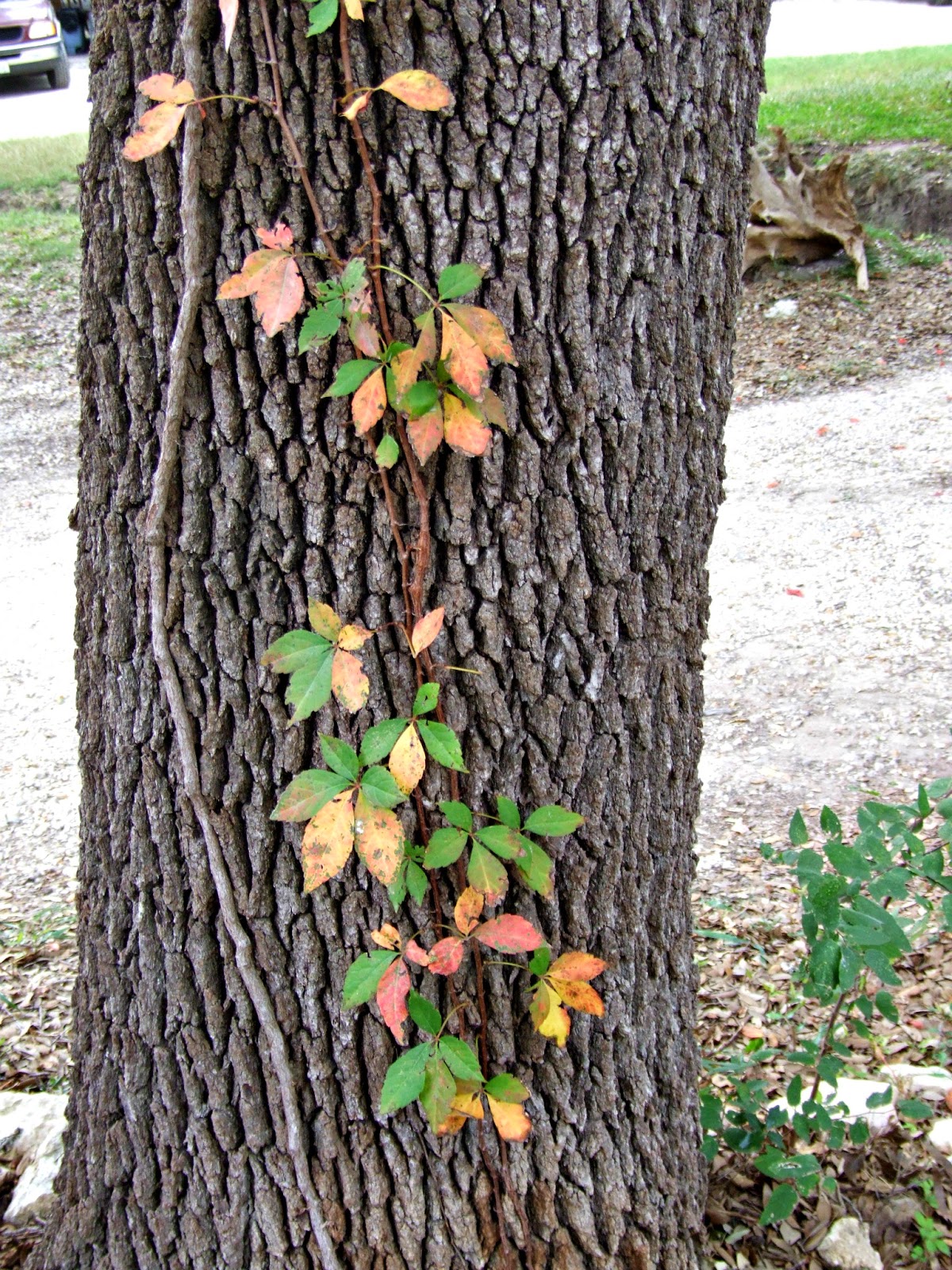 A settling in and quiet time

Haven't done much the last couple of days. Laundry and other ordinary things is all. I have done a couple of bracelets come to think of it. That was fun. I have a third one started. 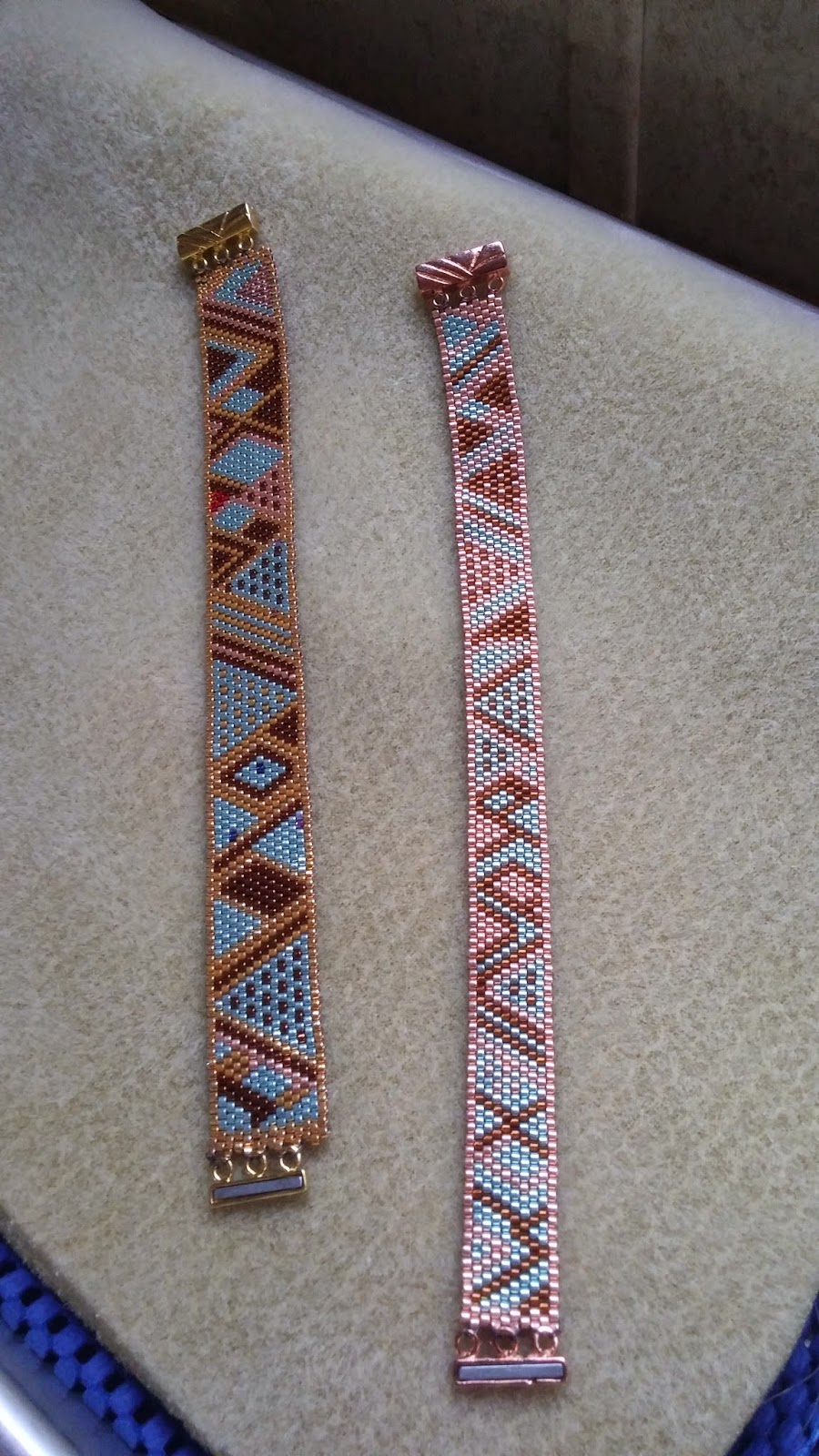 And then...
I am having a fight with myself in my mouth. This will most likely bore the daylights out of most of you. But this is the message I sent to my dentist just a bit ago and explains it all. Also keeps me from writing it all again: 2 months ago I became dehydrated and had a bad taste in my mouth and a blocked or sluggish salivary gland on the right side of my mouth. It became quite red and swollen and I was not able to wear my bottom plate for a few days. I started using Chlorhexadine right away and when that did not clear it up  I took a Z pak ( Azithromycin)and that took care of the bad taste but my mouth was still sore. Not severe but pesky. I was still able to wear my lowers and manage eating but still 1-2 on the pain scale. I attributed it to the sluggish salivary gland and still do but yesterday I had a "tooth" ache around the right implant and it was a 6 on the pain scale. I took my plate out and noticed puss around it. Scared the bejeebers out of me. I rinsed with Chlorhexadine and started another Z pak assuming there was infection in there somewhere. I got pain relief rather quickly. But... what do I do now?
I haven't heard from him yet but it hasn't been very long.

Butch played golf yesterday with Mike Bryce. I didn't think he played bad for being on a new course but he wasn't thrilled with it . He did say he had a good time. His attitude has matured in the last 10 years or so.;-)
Butch is going to do some interim washing on the motorhome. Get the bugs off the front and wash the car. And that reminds me of a great tip! Dryer softener sheets do a fantastic job of getting bug guts off the vehicle. Dampen the sheet and wipe away. Hardly any elbow grease needed.

And now for dessert-Pumpkin Pie Pudding 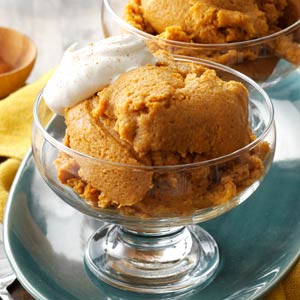 We enjoyed an indoor picnic at Roxy and Larry's last night along with other Canyon Lake friends. 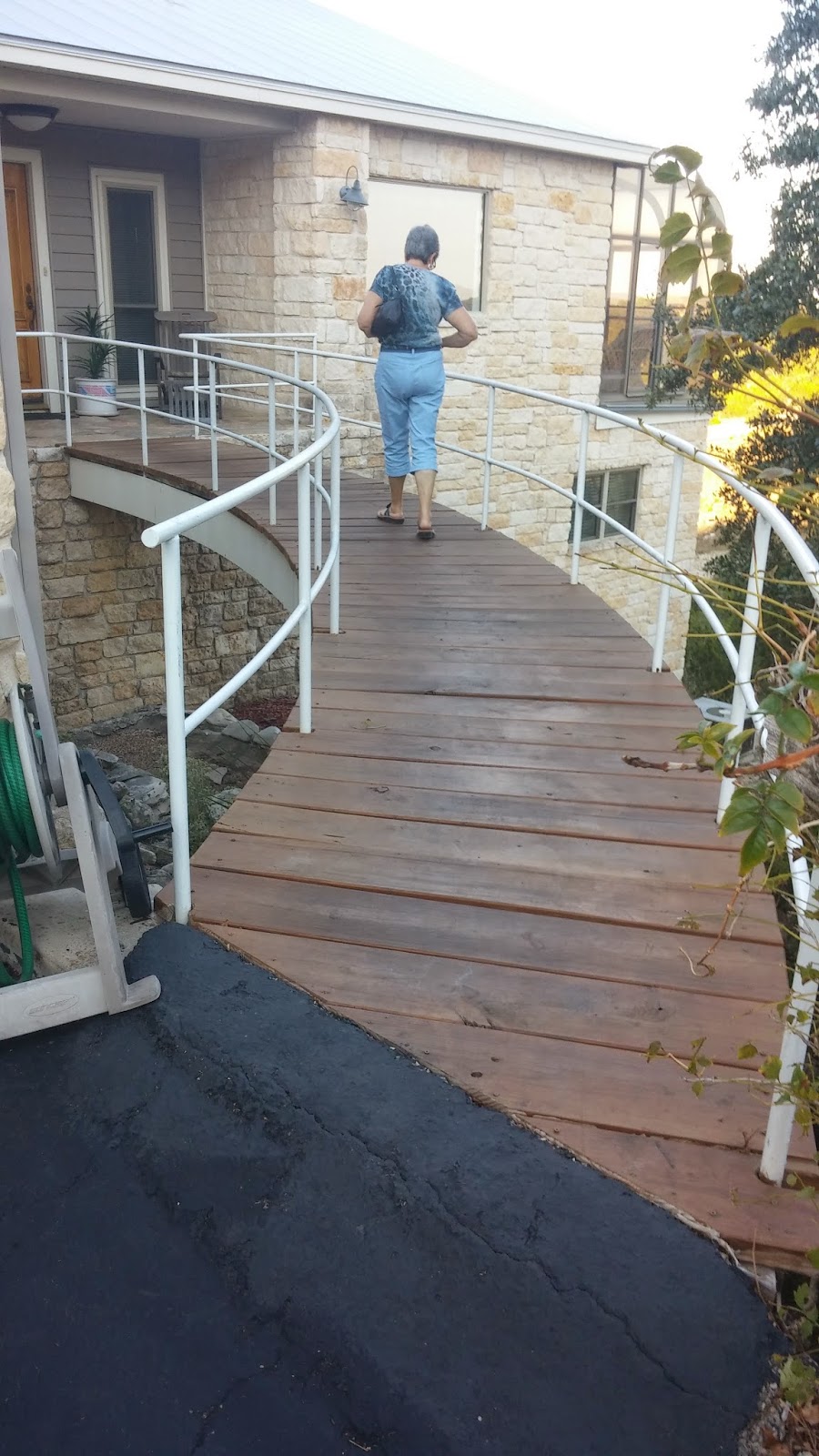 Lou Nelson headed for Roxy and Larry's front door. Roxy told me later that this bridge was not her idea for an entry but due to rock and other obstacles this was the solution. She has grown to like it. I thought it was cool. 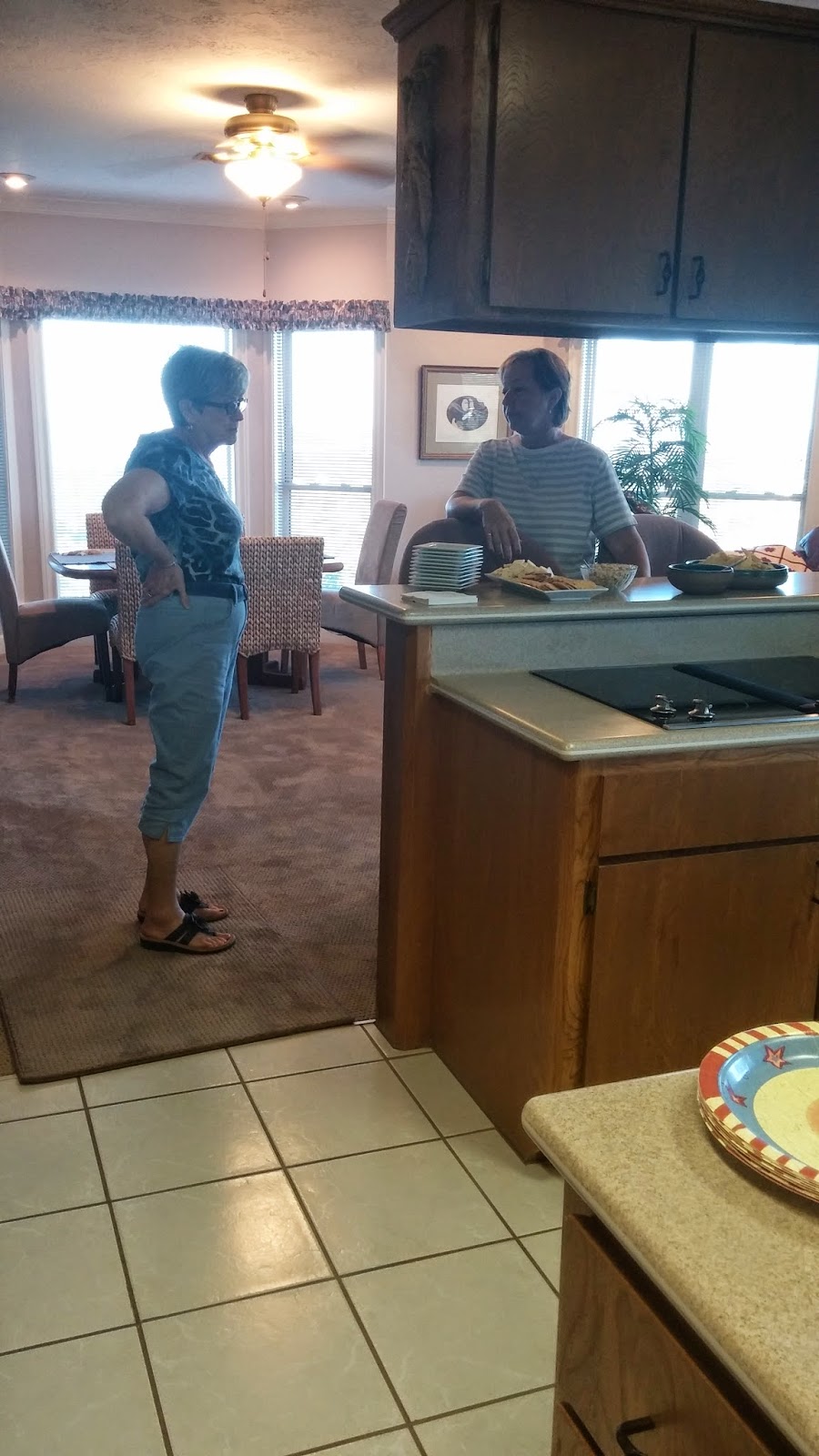 Lou and Sharon visit in the kitchen. This group are people we met at Snow Mountain Ranch YMCA of the Rockies in the years we volunteered there. Some of them continue to volunteer there. 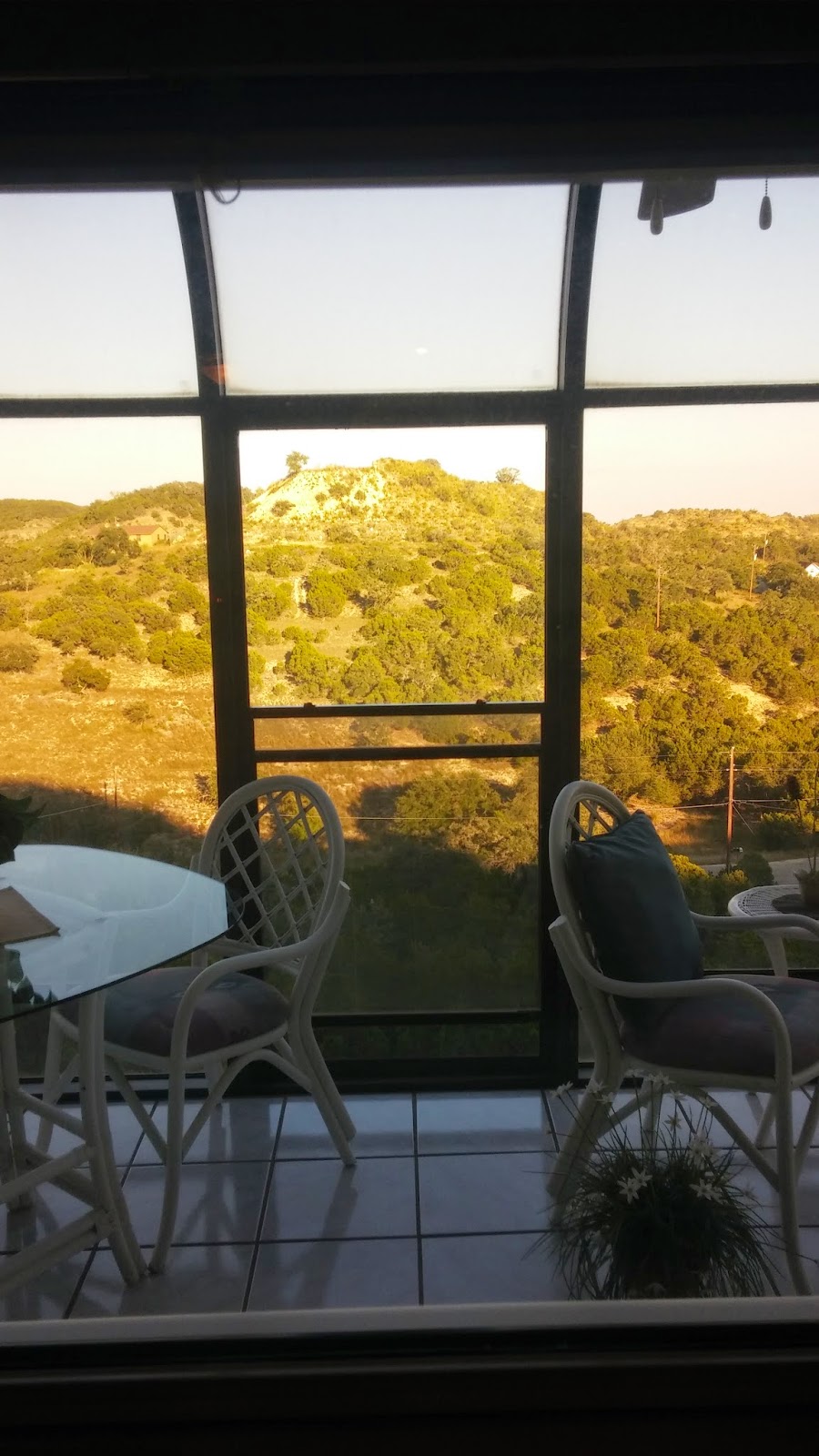 A view from the McGough's solarium. This house is built on what some might call a mountain. At the very least it could be described as a canyon ridge. 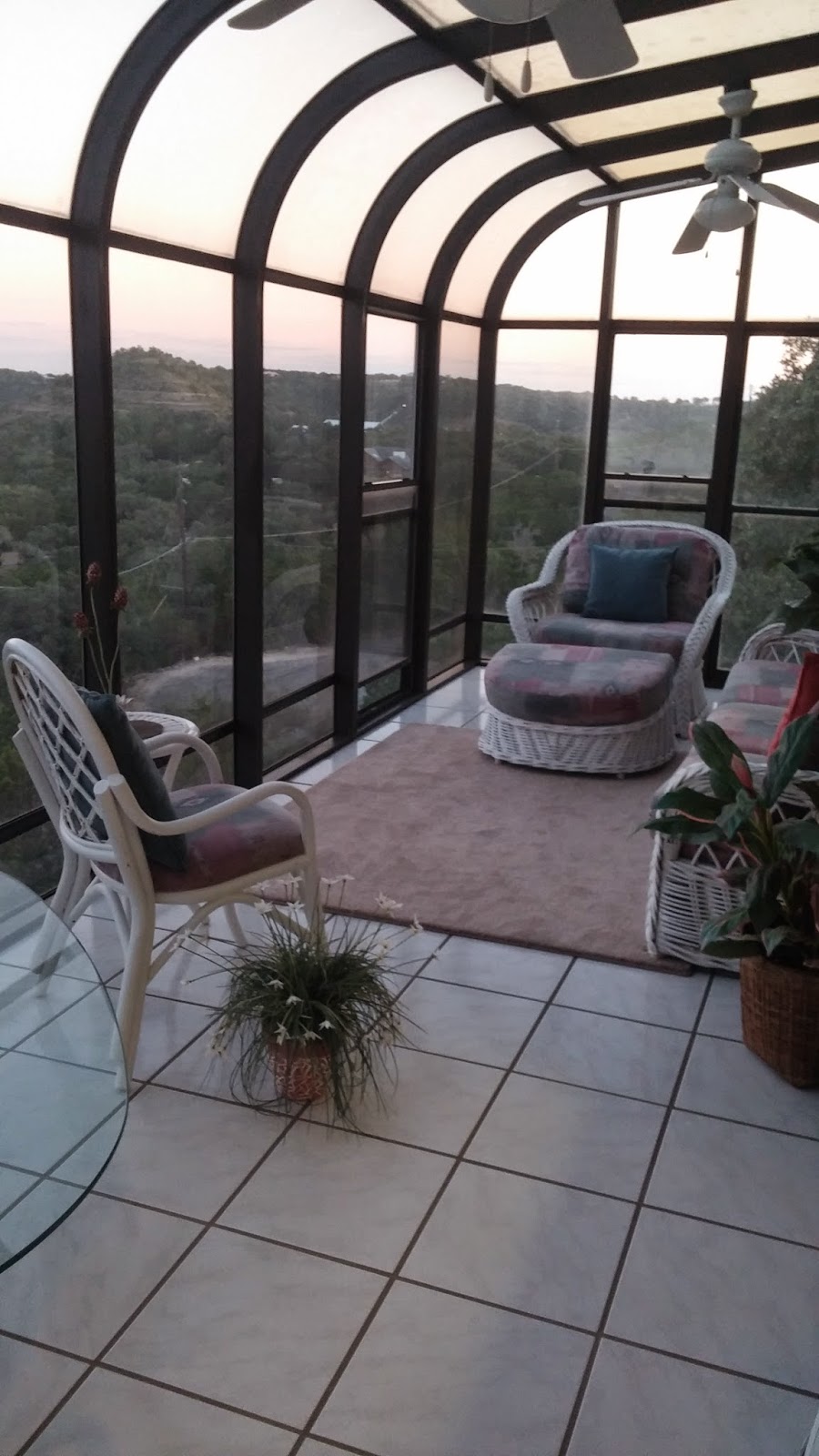 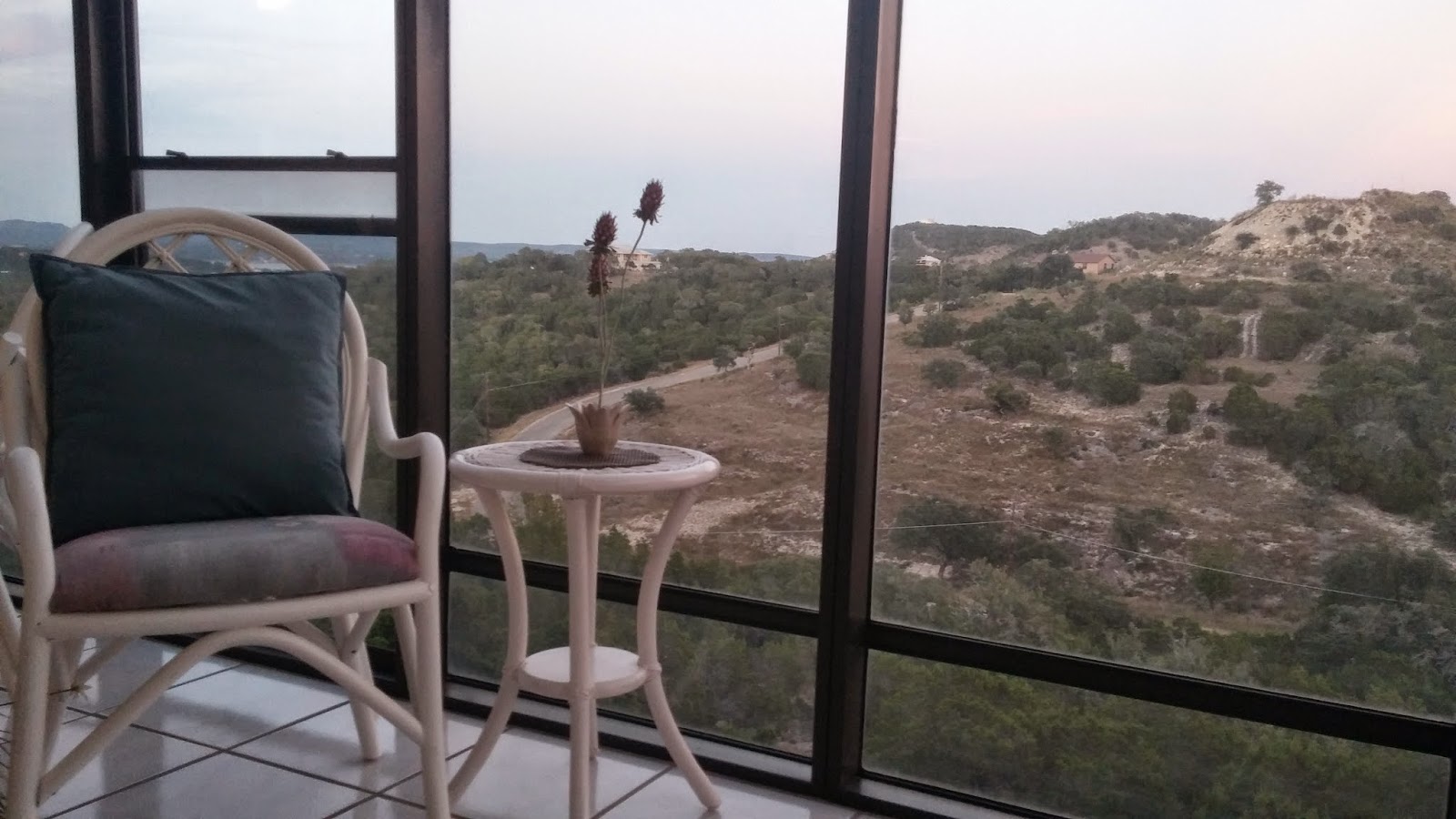 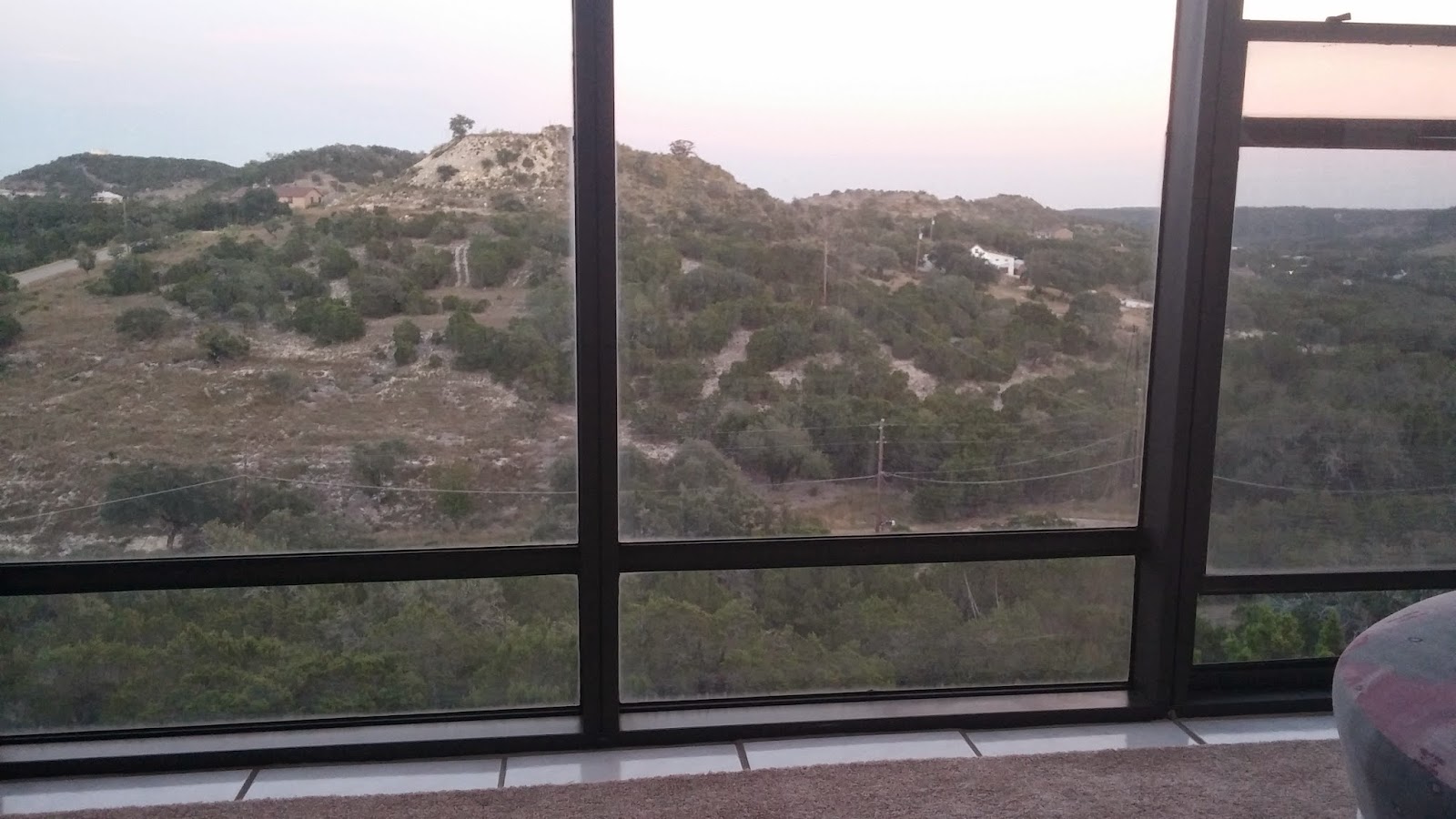 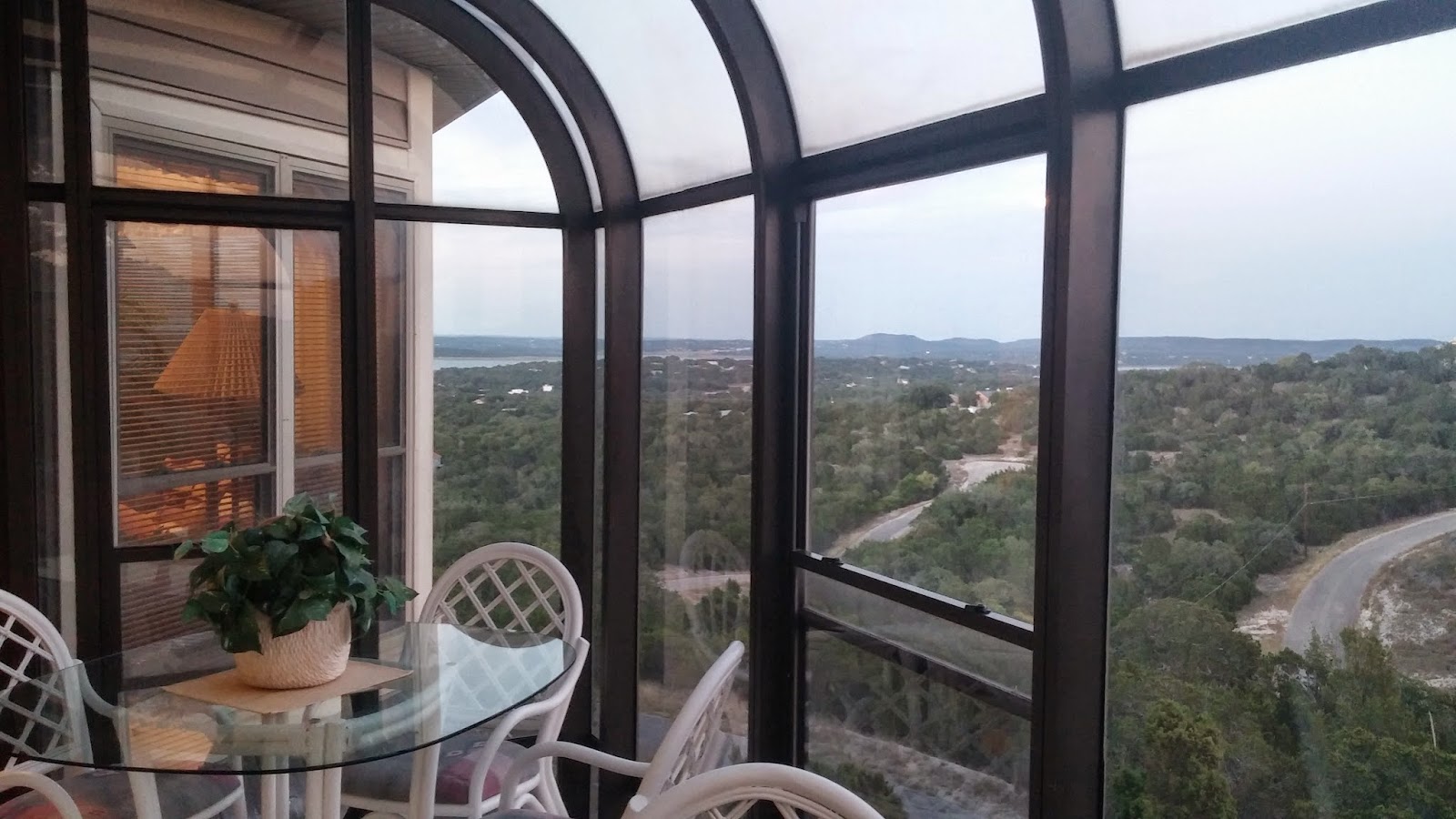 The lake can be seen in the distance in this shot. 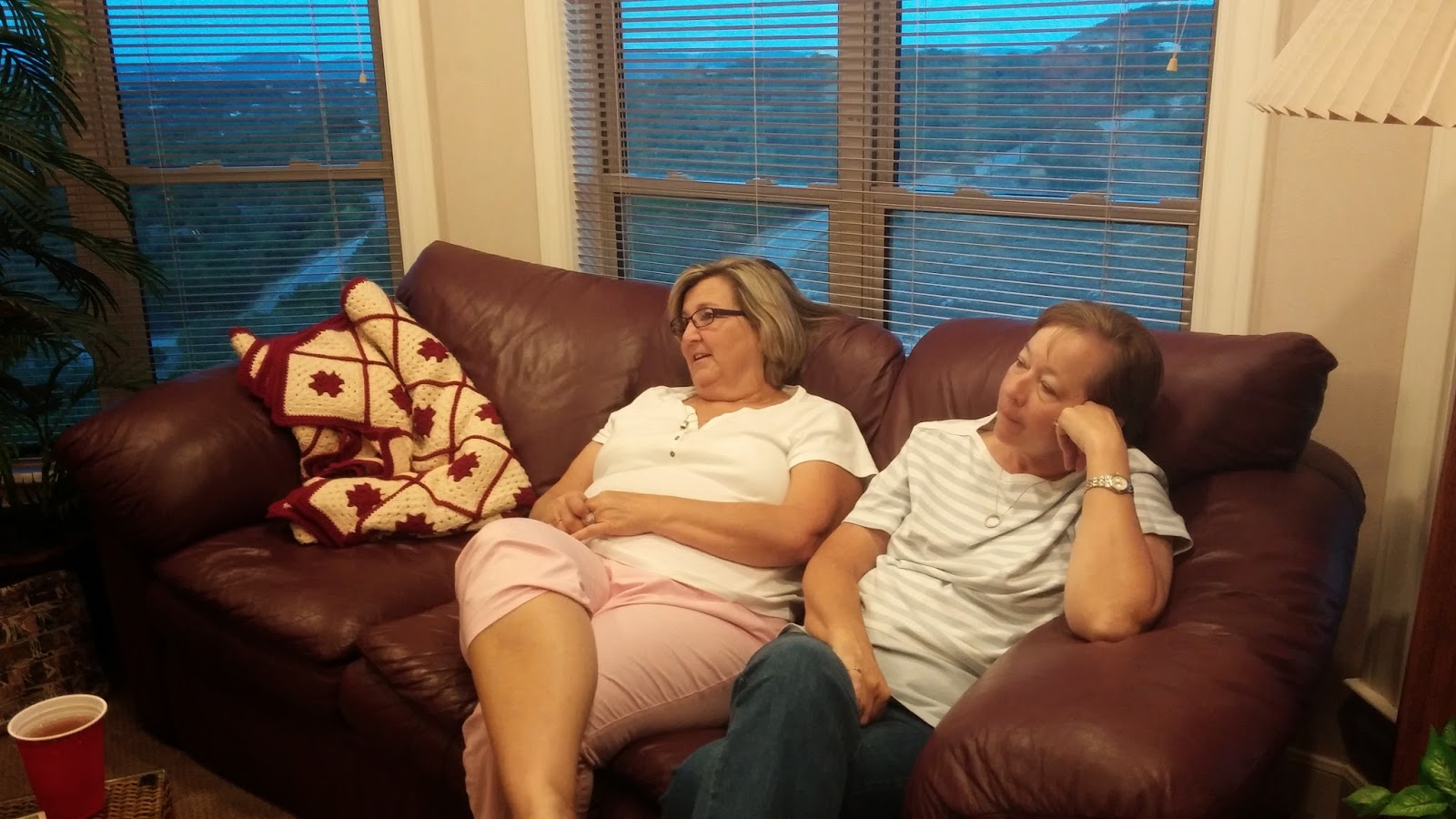 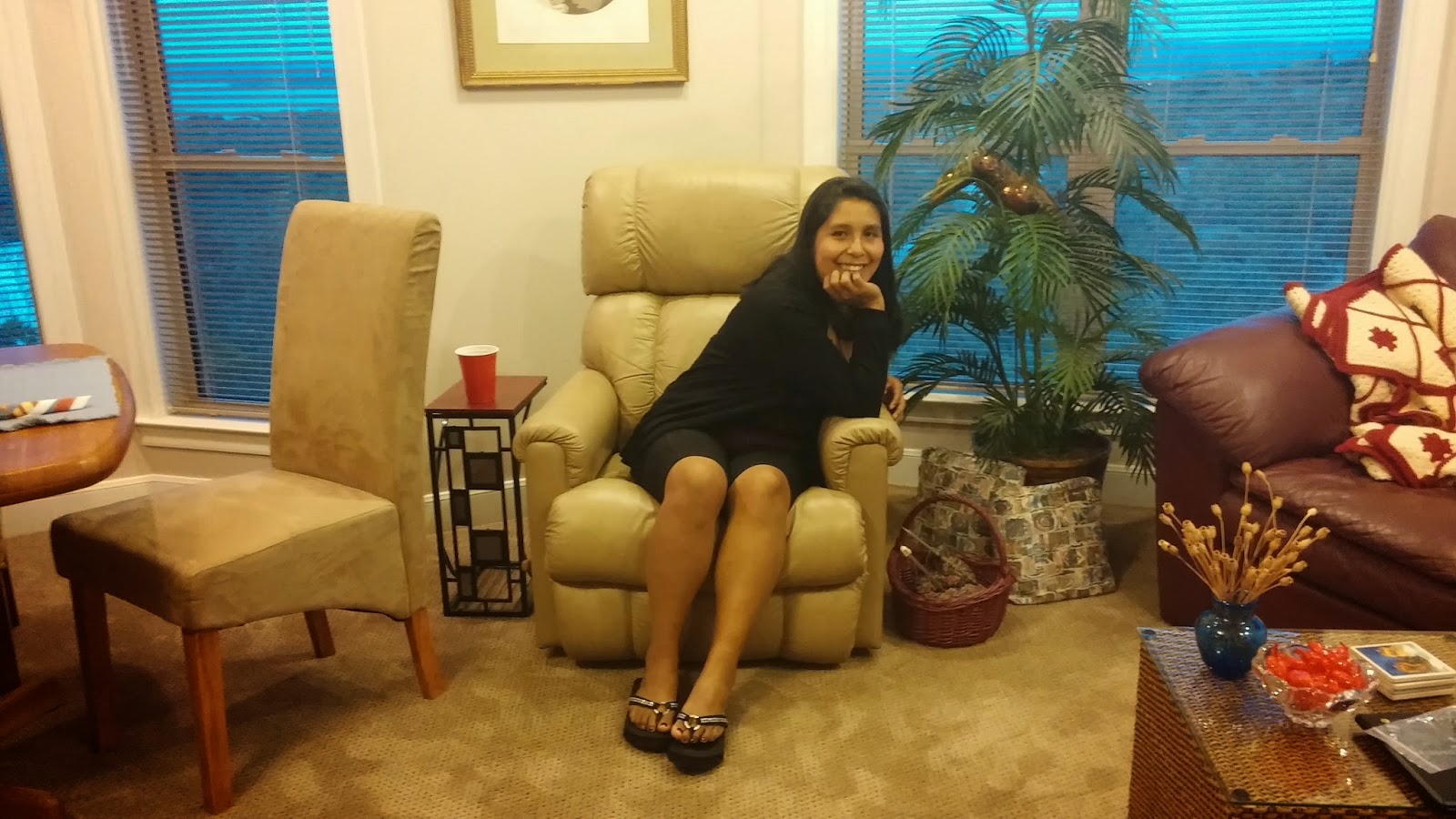 Sarita is from Bolivia. She worked in IT with Terry Linder while at Snow Mountain and became friends with the Linders. She has been here visiting with them since August and will be returning to Bolivia next month. We had some interesting conversations last night about her life in Bolivia. I asked her when the last war was in Bolivia and she was not  sure but after some thought decided it had to be for their independence in 1825. I looked it up and that is correct.
Someone else asked here what her schooling was like. They go to school either in the morning or afternoon but not both. They start classes in November and I do not remember how long the term was but they do have a break. Schooling is strict and they are required to be meticulous with their tablets and books. All boys are required to do 5 years of military training and girls are required to do one year. Since it was so long since Bolivia has had a war we asked why are they required to have military training. It is for readiness.
Her mother taught her to knit very young. She was a high energy girl and her mother wanted to keep her occupied because she was always bothering her about what she could do. Knitting kept her hands occupied and her mind focused.
The Linders have enjoyed having her here and hope she can come back soon.
Roxy and Larry have a pool table in their basement so the guys went down and played for a bit. I went down later and played a couple of games. I think Butch got the fever.
It was a fun night and the conversation was interesting.

We have paid for a month but may not stay that long. It was cheaper to go that way. This is a great place though. Only one small aggravation and that is poor phone service. This park isn't called Walnut CANYON RV Park for nothing. We have walls of rock on 3 sides of us. It isn't just Verizon that doesn't work well. It is all of them. It works well once we leave the park. Text messages come through okay. And we have good Internet. I say good and not great as there are times when it does not work either but it is free. Mostly times of heavy use by our neighbors.
Our friends Mike and Sharon Bryce invited us to a gathering at their home and once again I didn't get pictures. I did get two when I was experimenting with the night setting on my phone camera. And here they are: The Bryce's home is moderately sized but their rambling patio is quite large with 3 seating areas all facing the golf course. The night was warm and the company top notch. 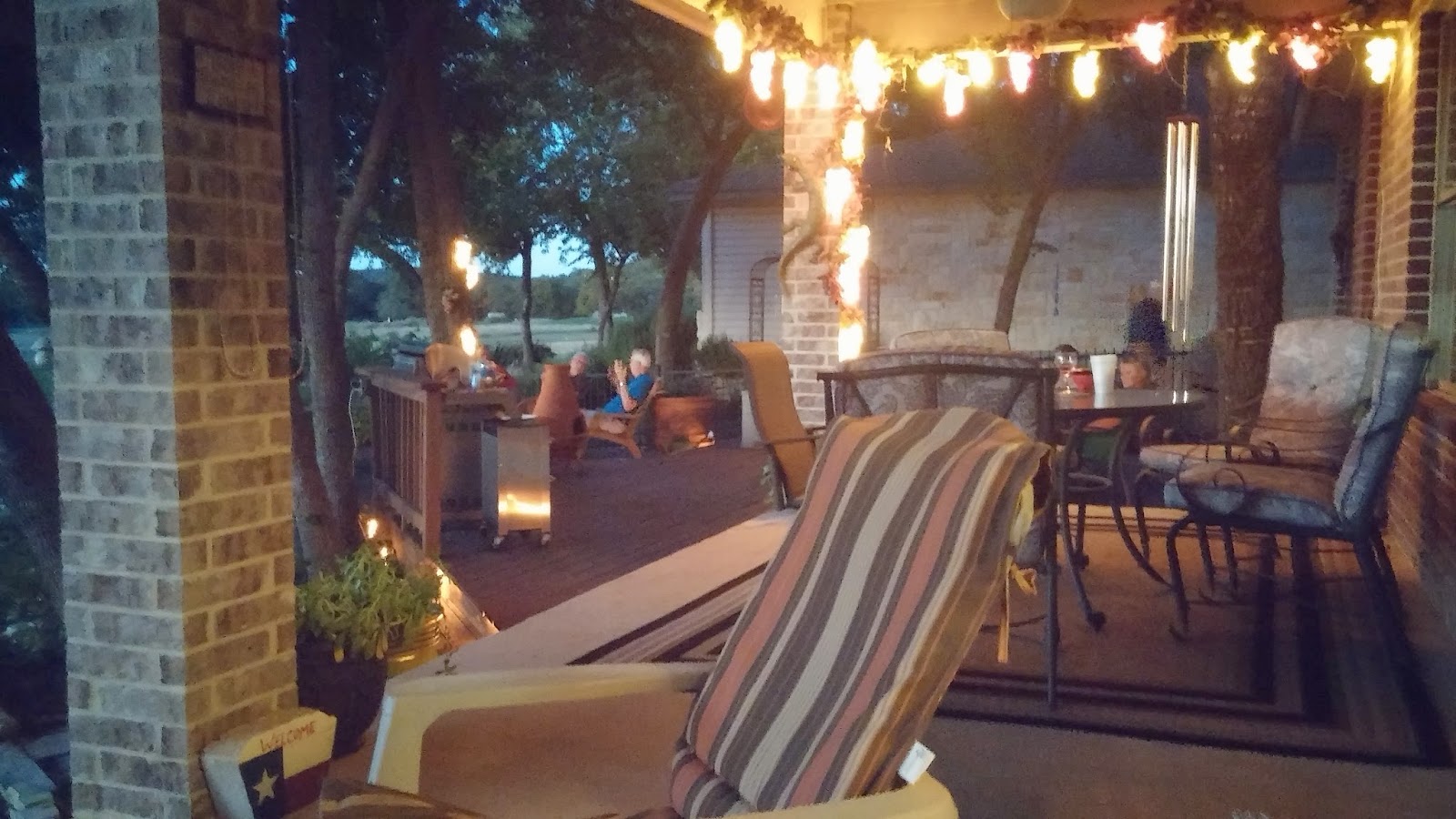 Another gathering planned for tonight. Maybe I can get some people pics for a change!
I have heard from my walk and talk buddy Colleen and she is in Cincinnati with her daughter and son-in-law. She said she was getting ready to go for a walk in her communication. I haven't gotten in the groove yet. I did plan to walk around the park but was forewarned last night that there have been cougar sightings. The dam that holds the water for Canyon Lake is a good place to walk but we have to drive to get there. I still plan to put it on my todo list.
I will be walking with Sharon at Costco later this morning but that doesn't qualify.
Got chores to do so...more later!
Posted by Barbara Brooker at 10/27/2014 08:49:00 AM No comments: Links to this post