Well, our friends the Gordon's and the Stilsons have safely made their way to Sunny South Texas and Magnolia Park. The fun has begun! Donn and Peggy Gordon treated us to supper at the El Dorado.

Bill Stilson otherwise known as Pecan Bill stops in Oklahoma to pick up as many pecans as his vehicle will allow. There are rules though as one year Kay rode from Oklahoma to south Texas with a hundred pounds of pecans between her knees. She said never again so now they all must fit in the trunk. 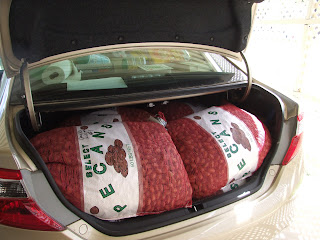 Here is this years pecan crop. Now Bill will have to get to crackin'! 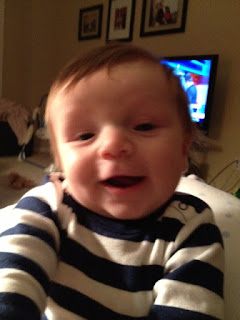 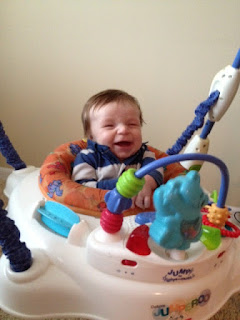 I am still working on getting unfinished projects finished. I have a Swedish weaving project that is getting all my crafting attention for the time being. Butch is wandering around wondering what to do with himself. He hasn't played golf since Tuesday but the winds have not been conducive to good golf anyway. He does wander into the pool hall and play a game or two off and on throughout the day.
Our friends the Stilson's did not get to the valley today. I called Kay and she said it would be too late if they came all the way down so they should be getting here tomorrow. The Gordon's will be getting here tomorrow as well. So Butch should have plenty to do tomorrow.
We have a cold front coming through on Monday. We will have a high of 75 degrees that day and then the wind will be from the north. It is a good thing....we can shut down the AC.

We have our walk done and we both noted how beautiful the weather was with moderate temperatures, a warm southerly breeze and glorious sunshine. Our friends the Stilson's are due to arrive today and we are looking forward to seeing them again. Our friends the Gordon's are due to arrive tomorrow and their house is ready for them...or as ready as we can get it. We would like to sit for a long catching up visit but we must leave them alone for awhile to get settled. And we will....maybe....
The vegetable cart is due to arrive today and I need to load up. We like to give the produce people our business so I have waited for them and being on South Beach we are feeling a bit deprived of veggies. Yeah, I never thought I would say that about Butch but he is wanting some jicama and has gobbled up every bit I have thus far purchased. I like the big fat carrots they have here too. I also hope they have some squash, both acorn and spaghetti. I tried a new squash this summer, a gift from friend Colleen, called batwing. It was very, very good. Looks much like an acorn but is sweeter. However after having a sugar-free body for 6 weeks now everything tastes sweet!
We thought we had friends coming to South Padre but now we don't so we will plan a trip there soon.
Butch is bored...never a good thing.wink, wink.
Posted by Barbara Brooker at 11/09/2012 09:32:00 AM No comments:

We did windows today. It improved our outlook immensely.  I took this picture yesterday. There is a scrap metal place on the corner and the es was hidden from view. Cute huh? 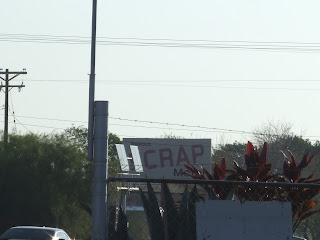 We purchased a new TV antenna from Mark Hvam. Mark has a business in the flea market selling RV related goods and services. Mark has been in the business for a long time and he knows his stuff. We now get 30 plus channels most of which are not worthy of watching.

The Catholic church owns the public television station here and at least 75% of their programming is church related. You can tune in most any time and watch nuns either praying or preaching. I sorely miss Iowa Public Television. Public television was my go-to station...not in South Texas.

I have made three bracelets since we left Iowa and have plans for more. Gotta keep this old girls hands busy and out of the foodstuffs. So far so good.

We went to Mexico yesterday to get some medicine for a friend but we found out it is one no longer available there. They told us the company would not send it and they had no idea when or if they ever would. So it was a wasted trip...well mostly. Butch did buy a bottle of tequila and I bought a bottle of clear vanilla. I use the vanilla for cleaning. No nachos, panchos or margaritas. Being here, where so much of the focus is on food will be a challenge for us.
After we returned from Mexico we went to our Farmers/Flea market just 2 or 3 blocks from us and  I picked up some jicama and cucumbers. Our snacks of choice these days. So really not much going on here...but I am okay with that.
.
Posted by Barbara Brooker at 11/04/2012 11:04:00 AM No comments: