Friday evening we went to the town square to see an Elvis impersonator, Joseph Hall from Lincoln NE. He was very good and quite pleasant to look at. Needless to say he was impersonating the YOUNG Elvis. Then Butch and I walked home in the dark just like days of old.
This morning we walked uptown again to see the parade and the wonderful Art Show held in the renovated All Ability Bike Shop. Here are some pictures from today. I will attempt to choose the best of over 80 pictures taken today. 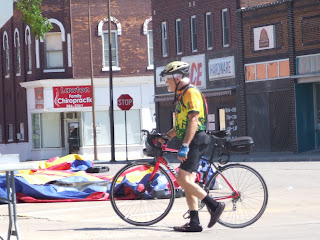 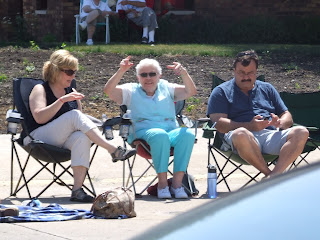 Keri, Jo and Leo wait for the parade. 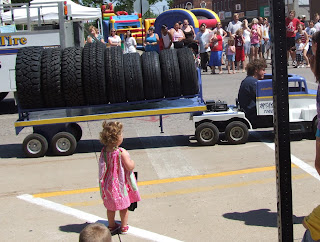 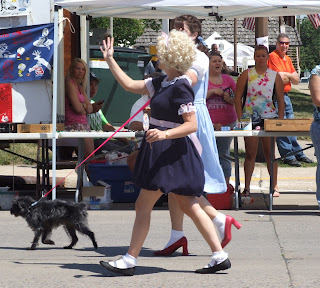 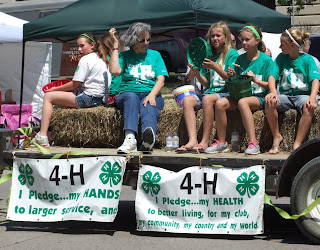 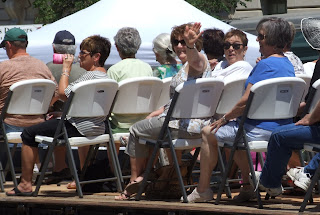 Tiny dancer inspired by the music of the...
Town and Country Band 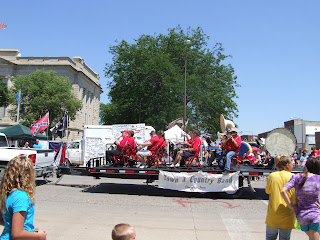 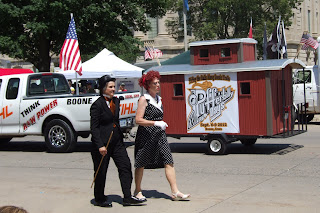 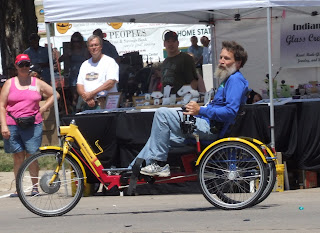 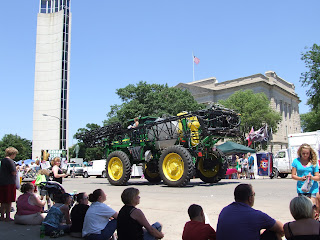 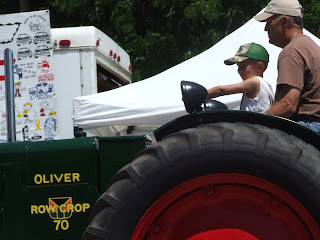 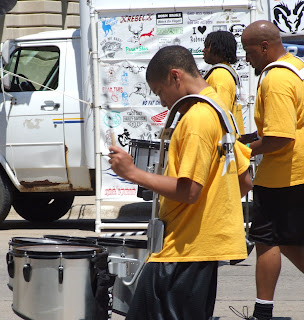 Isiserettes- Drumstick is a blur 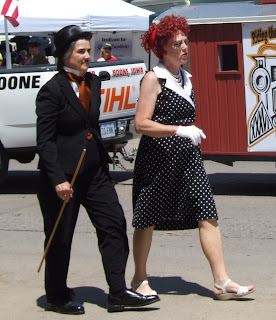 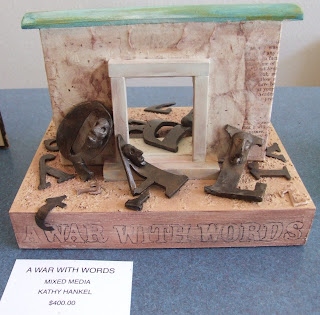 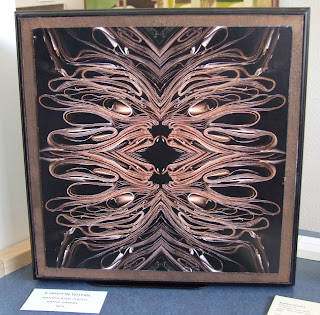 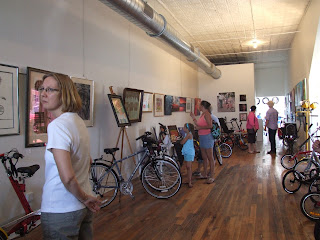 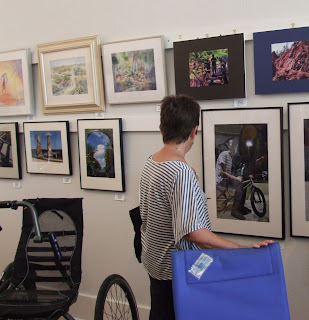 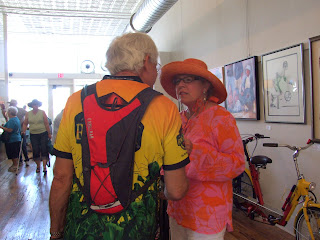 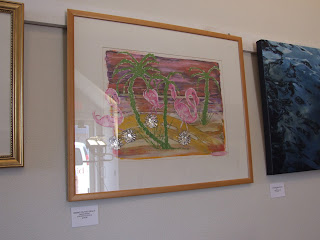 We were blessed with a dibby-dab of rain yesterday morning. I checked the gauge this morning and it did not have a drop in it. Butch and Bill had a long frustrating day getting the AC to work but they finally were successful late in the day and then we enjoyed a scrumptious grilled meal at Leo and Keri's. It also happened to be their 32nd Anniversary. Here they are 32 years ago. 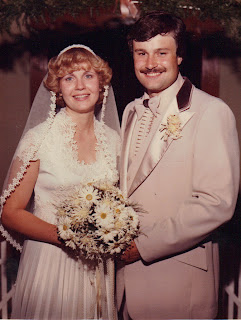 After supper we looked through old family pictures. That is always a fun time. Ran across this one of Butch and I from a long time ago. 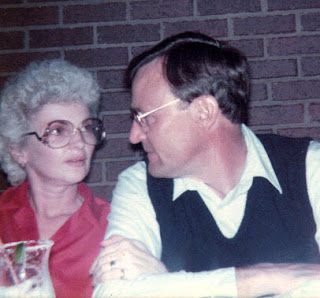 Perhaps early 80's. Now you may want to put a caption on it and I would be interested in what you might say. I may tell you what I think later.

This was on the trail this morning...can you find the bunny? 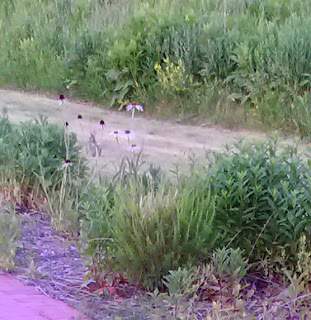 After our walk this morning Colleen and I assembled her Simple Wifi antenna. And it is working great for her and she is now a happy Internet user.

Butch and Bill made their way to the golf course this morning. Butch said he forgot to take his head. Most likely all the pent up pressure of yesterday. 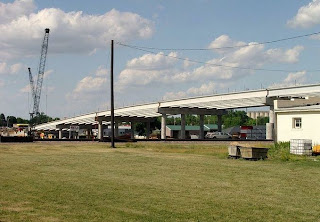 Snipped a great view of the new overpass off Facebook this morning. 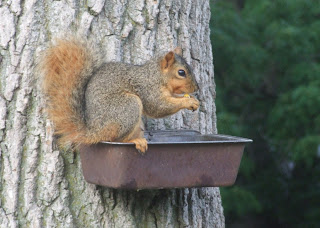 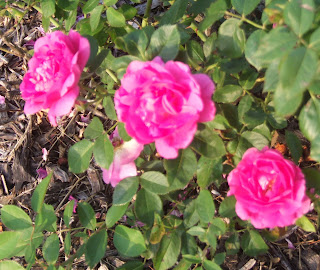 Roses on the trail 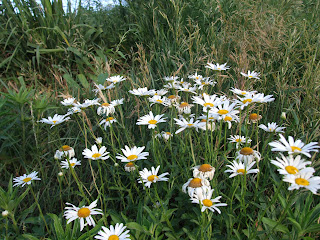 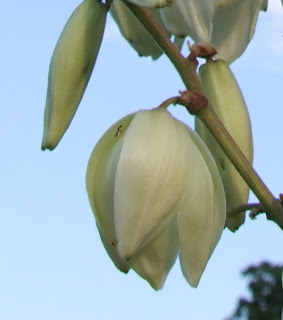 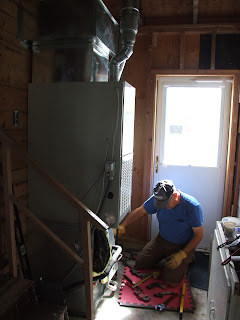 Busy is as busy does

Butch and Bill are hard at it in the house and making some good progress. I need to get in there and take some pictures but I hate to get in the way. I will sneak in soon and do that.
Cousins Dick and JoAnn Jorgensen and their granddaughter Hannah came to Jefferson to get some grave pictures and that made a nice break in the afternoon. Hannah took some shutters off our hands for her own DIY project. She is starting young taking on projects.
Late afternoon we ventured uptown to the first farmers market of the season and there were lots of goodies to buy including a tasty homemade supper of hamburgers, mac salad, bars and a drink for $5. Can't beat it with a stick.
The weather has been super unless you are in the business of growing crops and then it is a bit more than scary as there isn't one shred of rain in the forecast and we are in dire need of moisture.
So I have fallen into somewhat of a routine. Walk with Colleen at 7:00 AM and then come home to do whatever else the day may hold, like laundry. I REALLY like getting that walk in early. it injects so much energy into the very best time of day.
Butch just told me....
I was supposed to go to a grandnephews ball game tonight and I remembered right up to 5:00 PM and then both Butch and I forgot!! Darn, darn and double darn!!  I didn't even remember late. Butch did. This getting old really sucks sometimes. Back in the day I would NEVER have forgotten. I used to pride myself on my memory. Well those days must be gone.
Posted by Barbara Brooker at 6/05/2012 09:30:00 PM No comments:

Busy Sunday and here it is Monday

Butch and I went for a 2 mile walk. My friend Colleen sprained her ankle so she took the day off from walking. But we were back at it this morning. Today we chose the bike trail for our walk and I think we will tomorrow as well. It is a nice place to walk with an even surface and wide enough to walk abreast.
Jason called for Butch to play golf but then a storm brewed. As it turns out that is all it did was brew but they delayed their game until the threat was past. Leo stopped by and visited in the meantime. We got many things thoroughly discussed.
Bill and Jo arrived today from Arkansas by way of Waukee Iowa. Bill plans to help Butch with heating and plumbing installs and then Bill has a class reunion next weekend. Jo was only a year behind so she knows many of the classmates as well as Bill does.
It will be a busy week for all concerned in Jefferson.
Bell Tower Festival is this coming weekend.
Posted by Barbara Brooker at 6/04/2012 05:09:00 PM No comments: