AT THE MIDDLE PASSAGE

Earlier in the summer we visited friends on the other side of the
mountain. While the children wandered off to play games upstairs, we
sat around their kitchen table in the late afternoon and talked for some
time about the state of the world.

Most of the talk was political, about the policies of the current
administration, but as I sat quietly, for the most part, and listened,
it felt like some larger sense of dismay was being talked about below
the surface. I have been hearing its echoes ever since.

Except on a local and personal level, I don't think that anyone is happy
with the way things are going in the first decade of the new millennium.
With the collapse of the Soviet Union and the threat of nuclear war
fading, we had hope in the eighties and nineties that we had left
behind the worst problems of the worst century in history. We felt for a
brief, giddy moment that we had turned some kind of corner and were
stepping out of the shadows into the sunlight.

But this new century is shaping up as a mirror image of the previous
one, with a pervasive fear of terrorism taking the place of communism in
our psyche. It is almost as if the dark part of our selves had to find
its counterpart in a global evil, as if we had to have a war on
something, if not a Cold War, then the War on Terror.

Once we begin to use the terms of war, we fall back into our old bad
habits. We have no choice except to mobilize our troops, build up our
arsenals and demonize our enemy. We know how to do war much better than
we know how to make peace. We're good at war; we've had so much
practice at it these last hundred years. Our hand reaches toward a gun
or a bigger military budget automatically, the way a smoker reaches for
his pack of cigarettes.

We are now beginning to believe we are in a long and inevitable
conflict with radical Islamist fundamentalism. Pundits are telling us
that it is a conflict that will shape our future and our children's and
grandchildren's future for decades to come. We have to be prepared, in
other words, for a long and costly struggle, one that will drain the
resources we might otherwise use to educate our children or solve our
healthcare dilemma. Is there really anything inevitable about this at
all, or are we creating the evil by preparing for it?

We know by now how vulnerable we are to suggestion. Clumsy and leading
questions helped school children in California to "remember" all sorts
of abuse that never took place. Recent experiments with adults show
that we can be led to remember events that we never experienced. If a
fortune teller predicts that you will fall in love with a tall,
dark-haired stranger, don't be amazed if that is exactly who you choose
to talk to at a party.

When we talk about war, the images spring up on their own. We see tanks
and marching troops, airplanes streaking overhead. We see ships
steaming out of port, and walls and barbed wired around our borders.
What else can we do but follow those images to their logical conclusion,
even if the enemy is a couple of hundred or thousand badly armed
terrorists hiding in a country so poor and broken it can't pave its
roads?
I don't have the answers for why the world has grown dark again after
the bright promise of the Velvet Revolution and Solidarity, the end of
the Evil Empire and the fall of the Berlin Wall. Is it a shadow inside
us that we project across the future? Or have we made war our hard to
break bad habit?

It was almost evening and the shadows were growing long in the kitchen
where we still sat talking across the table. Lois quoted a line from the
philosopher Bertrand Russell. "The whole problem with the world is that
fools and fanatics are always so certain of themselves, but wiser people
so full of doubts." We asked her to write it down, and I have it here
in front of me for solace in my uncertainty.

(The above column originally appeared in the Centre Daily Times and is
copyright ? 2005 by Walter Mills. All rights reserved worldwide. To
contact Walt, address your emails to wmills@chilitech.com
Posted by Barbara Brooker at 9/03/2005 08:04:00 PM No comments: Links to this post

There were six groups climbing El Capitan but they were not easily seen to the naked eye.
Posted by Barbara Brooker at 9/03/2005 11:35:00 AM No comments: Links to this post 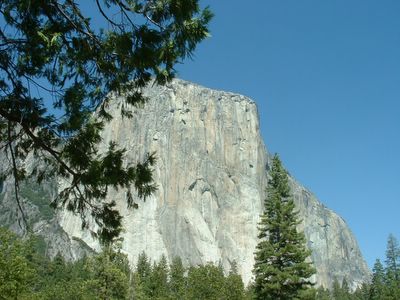 Yesterday we went to Yosemite. Lots of rocks...and trees...and mountains...and rockclimbers...and hikers and one little bear.
Posted by Barbara Brooker at 9/03/2005 11:33:00 AM No comments: Links to this post

Some things I have learned about desert living. If you pet the cat with 8% humidity you will get static. If you wash rugs and take them outside they will dry in about 10 minutes. Plants can stand to be watered about 3 times a day. You can see things a long ways away...but they may not be real.

We are now in Hawthorne NV and I kinda like this small desert town where things are easy to find. We thought it might be a good jumping off point for Yosemite 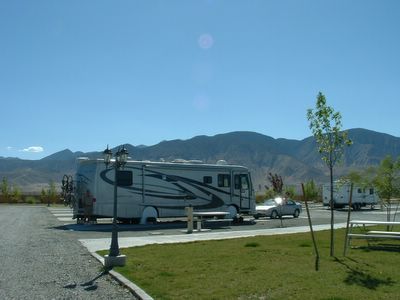 Austin Gordon and his Grandma Peggy 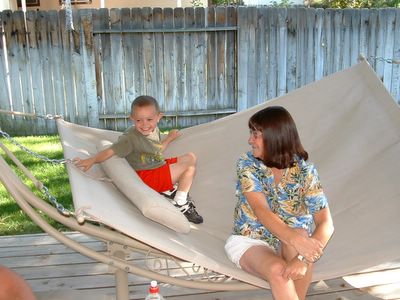 Austin Gordon, grandson of friend Peggy requested I take a shot of his backside. He is quite the little charmer so I was glad to oblige. 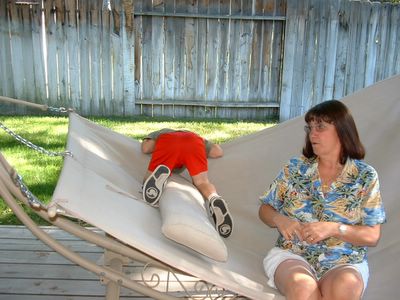 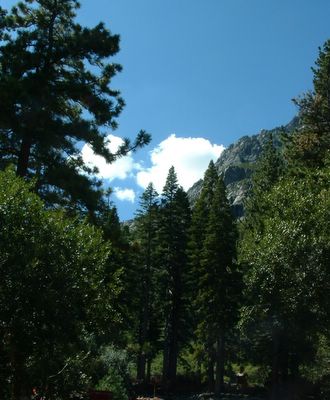 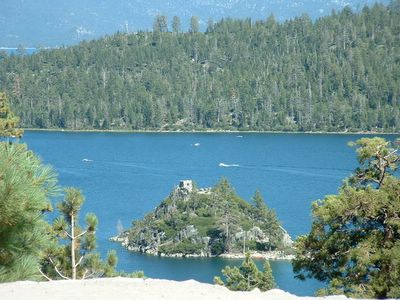 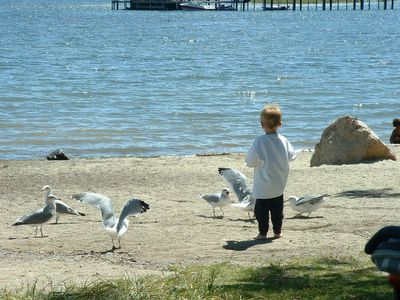 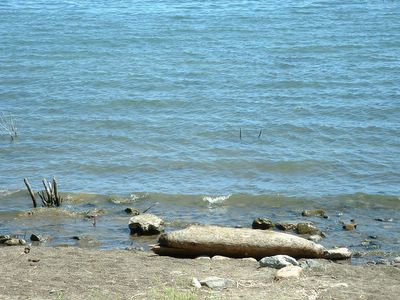 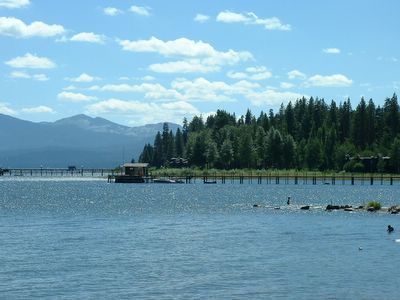 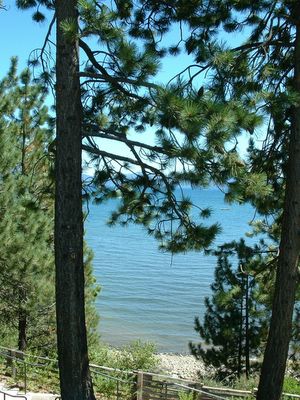 Donn and Peggy came to see us in Fernley from their home in Carson City NV. Donn was being a bit goofy so now we must get another picture. 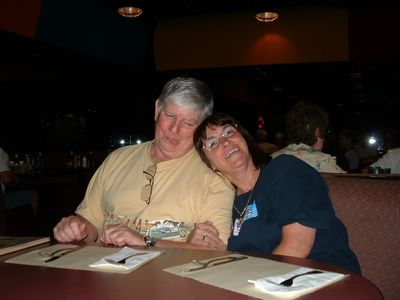 Butch and friend Donn Gordon checking out the power lines. 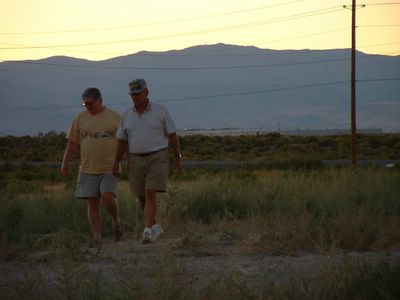 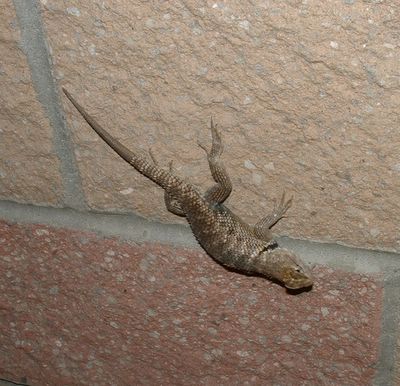 Butch asked the guys about this high power line. They said it was a 500,000 volt line and it starts in Washington state and goes to LA. 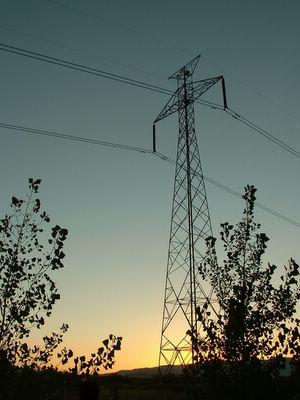 When we arrived at the Fernley NV park ( Desert Rose RV Park) they were working on the lines just a few feet from where we were parked. Butch had to go tell them that this is what lineman do when they retire. We learned that they do not shut off lines to work on them during the day here. Two different nights between midnight and 4 AM there were scheduled outages. And then...
Butch went to play golf and he drove the golf cart under these high power lines and the crackle he heard spooked him so bad that he completely blew the last two holes. I must admit it was very loud and you could hear it from a fair distance away. 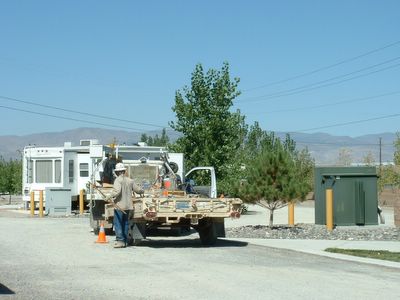 Last Friday we drove to Lake Tahoe and went all the way around it. It was very difficult to find a place to park. The word we saw most often was NO! NO Parking, No cars stopping on shoulder, NO RV's...No,No,No. Might as well had a sign that said NO Visitors. But we finally found a public park and parked in front of a store selling wheat grass smoothies. I couldn't talk Butch into trying one. Hehehe. Once again I did take pictures but will wait to post them till I have a connection that I do not lose every few minutes.

On Saturday old friends Donn & Peggy Gordon came to visit and we had a great time catching up on the last twenty years. We hope to see them a few more times before we are out of the area.

Yesterday Butch and I rode around a housing development on our bikes. There are over five miles of streets to ride on and it is directly behind the RV park so not a bad deal but I much prefer a nice bike trail.

We are finding out about desert living and so far we are wondering why anyone would want to do it! The campground hosts here said that had they known about the dust and wind they never would have signed on for four months. The wind has not been bad since we arrived but they are predicting forty MPH winds this afternoon. The temps have been in the nineties but with a 10% humidity you feel like you are being roasted not stewed as you are in Iowa.