Butch takes it up

Often times in between the busy times at Snow mountain Ranch or Magnolia Park Butch will find himself at odds for something to do. He would rather play golf of course but sometimes it just doesn't work out. He had such a day yesterday so I suggested he start a small Swedish weaving project. There is nothing sexist about it. There isn't a law that you have to be female to enjoy it. So he started a project yesterday and judging from the time he spent on it he may get it finished someday. One of the amazing things about it is that in doing a project most of us do half of it then turn our work over to do the other half. Me, being right handed, start in the middle and work toward the left side. Then I turn my work upside down and do the same. Butch changes hands!! He uses his right hand to do one half then instead of turning it over he switches the needle to the left hand to do the other half! I knew he had some ambidexterity because he deals cards left handed but I had no idea it was that deeply ingrained. Imagine being married for nearly 50 years and not knowing that about him. It shows there is always something new to learn about people.
Posted by Barbara Brooker at 9/27/2008 11:31:00 AM No comments: Links to this post

Also called vegetable spaghetti, this creamy-yellow, watermelon-shaped winter squash was so named because of its flesh, which, when cooked, separates into yellow-gold spaghettilike strands. Averaging from 4 to 8 pounds, spaghetti squash are available year-round with a peak season from early fall through winter. Choose squash that are hard and smooth with an even pale yellow color. Avoid greenish squash (a sign of immaturity) and those with bruised or damaged spots. Store uncut spaghetti squash at room temperature for up to three weeks. After the whole squash is baked, the rather bland-tasting strands can be removed from the shell and served with sauce, like pasta. They can also be served as part of a casserole or cold as a salad ingredient. 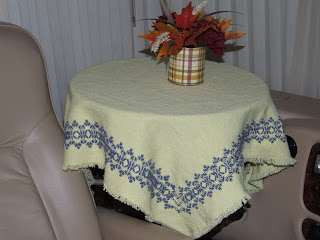 My latest Swedish Weaving project. This one was fun, easy and quick. It is yellow monk's cloth with country blue yarn in the Victorian lace pattern
Posted by Barbara Brooker at 9/24/2008 08:06:00 AM No comments: Links to this post 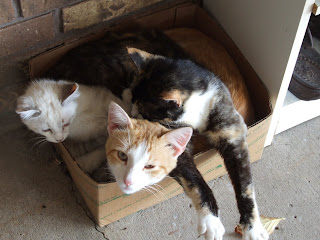 Lucy, Mama and Stubby all in one small box. I think they like it that way...and then Stubby left the nest. 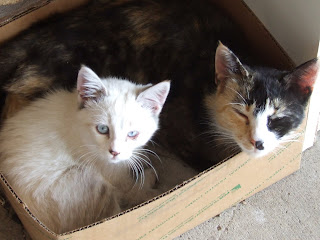