Another Friday rolls around...

I have an appointment late this afternoon to find out the details about my surgery on the 10th. So Butch had time to walk nine holes of golf and I rode out to Rogers Road. Mickey had asked me about where walnuts were on the trail so I paid close attention today and then sent her this message.
If you drive out to where 255th street intersects with the trail (near Winkleman's Switch) and look north on the trail you will see an orange flag and there are walnuts there. I paid close attention today and they have put an orange flag near all the walnut trees on the trail. I do not know if that was for safety or harvesting of walnuts.

If you go out and park on 252nd street near where Murphy's place is, north of the big bridge, it is exactly 0.53 miles to the first nice walnut fall. That would be on the south side of the trestle bridge. If that still seems too far to walk you can pull into Murphy's driveway and follow the trail up to very near the bridge, walk across the bridge and it would be less than a block to the walnuts. Happy Harvest!

As I was returning back to town I saw this apparition coming toward me. It looked like a floating man! He hopped off the front of the bike and then I could see a woman peddling a very decrepit bicycle while carrying a filthy once-white duffle bag over her shoulder. I said to her, "So you think that is going to work for you?" She said, "Oh yeah." They were both in need of some personal hygiene and a large amount of dental work. I would say they had about 3 teeth each and those were dark. I was impressed with her bike riding ability. Balancing a 6 ft. man, even a skinny one on the handlebars of a bike and carrying a fair-sized duffle bag over your shoulder at the same time made her a wonder woman! I wonder where they get their METH. And I wonder where they were headed. They were at the trailhead when I encountered them. In other words, they hadn't made it out of town yet.
Posted by Barbara Brooker at 9/29/2017 12:17:00 PM No comments: Links to this post

Change in the Weather

There has been a change in the weather. It has cooled off and we have had about 3/4 inch of rain. We desperately needed it and it hasn't been enough to change our drought status but every little bit helps.

I didn't get a ride nor a walk in yesterday not because there wasn't an opportunity but because I was on tech support with Hulu. After three separate sessions, we came up with an answer but not a solution. Don't worry about it in regards to Hulu for you, as the problem is peculiar to us.

This will set me off on another angle or bit of advice perhaps. When you have a problem with a device of any kind do not be afraid of tech support. It is their job and you are the customer who is always right. And if it still perplexes you invite a friend like me over and we will work on it together.
By calling tech support you can save yourself days, weeks or even months of frustration. I often say that I do not have all the answers but I do have ideas about where I can find them.
For people with Netflix, there is a new Netflix movie being released on Sept 29th, Friday, called Our Souls at Night with Robert Redfern and Jane Fonda.
It is about finding love when you thought you were too old to have that happen. It looks like a good one.

I did manage to get my walk in this dark and dreary morning and I did get misted on a little at times but not so much to create a problem for me.
I have two appointments later this week. Thursday is my last physical therapy session before surgery and Friday is my pre-op appointment with the surgeon. I have done everything asked of me to get ready for it. The waiting has been the worst of it. The procedure is called Sacral Colpopexy for those of you with enough curiosity to look it up.

We are starting a 30 day free trial of Hulu. I tried Hulu way back when it was free and I was not impressed but it has been more than a decade so I thought I would see what I think about it now.
I am impressed by their wide range of offerings. For instance, Butch and I missed the first episode of Dancing With The Stars and Hulu carries TV shows and so we were able to see it after the fact. I am impressed how they handle commercials. You still get commercials if you go with their cheapest package ($7.99 a month) However they show all the commercials in the first 30 minutes of the show and it is commercial free after that AND they tell you how many commercials there will be and how long it will take! It is like knowing how far it is to the next town, much easier to take when you know.
I signed up for their free month because I wanted to watch The Handmaids Tale. I have read the book, listened to it actually but it held my attention and won awards. We are nearly finished and will continue to get more experiences with Hulu. At least until October 21st when our month is up. So far I am saying we are at least 50% probable of keeping it. After all, $7.99 is the price of a sandwich!
Posted by Barbara Brooker at 9/24/2017 11:14:00 AM No comments: Links to this post

All Out of Windows 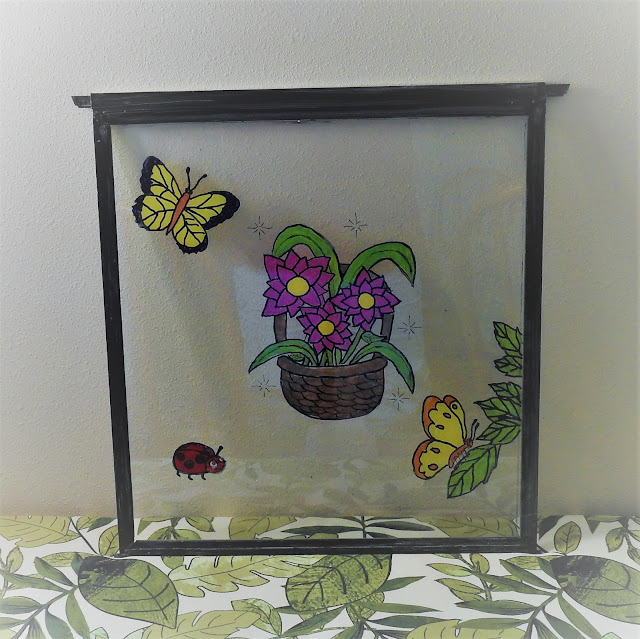 Jason surprised Keri and me by showing up at 7:00 AM. This must mean that we are getting predictable. It was a fun day on the trail. When the leaves fall it creates a different view of things that you see in mid-summer. A Red-tailed Hawk flew low and right over our heads. Deer crossed in front of us and more were seen just beyond the tree line. Numerous little ground squirrels. Many flocks of Geese and a flock of Wild Turkeys. It seemed there was something cool to see most every which way you looked!
Today's pictures from the trail: Morning sunrise 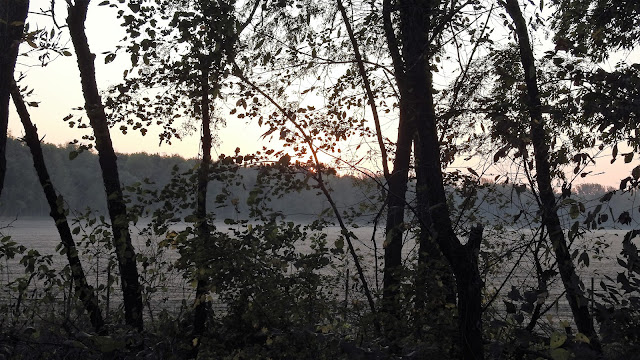 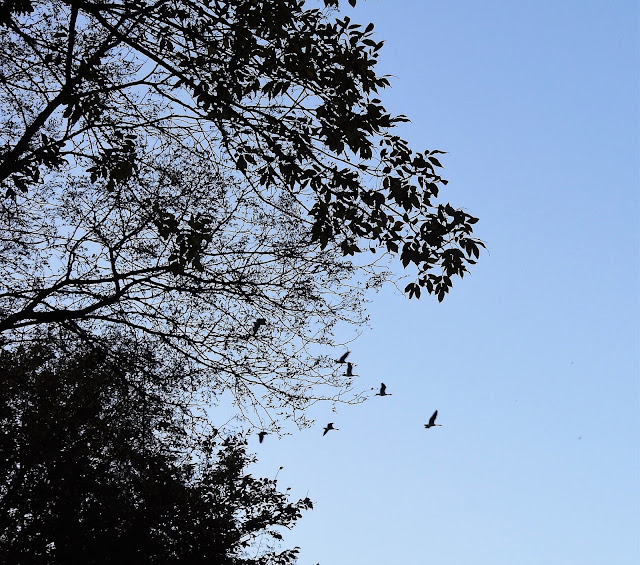 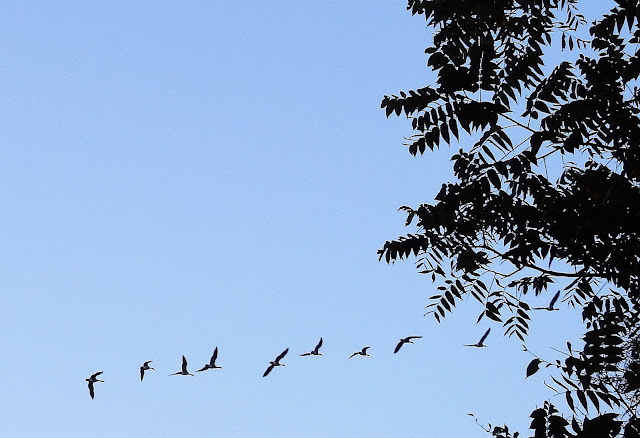 Wild Turkeys. They were so far away that I would not have been able to get this shot without my Nikon CoolPix P900 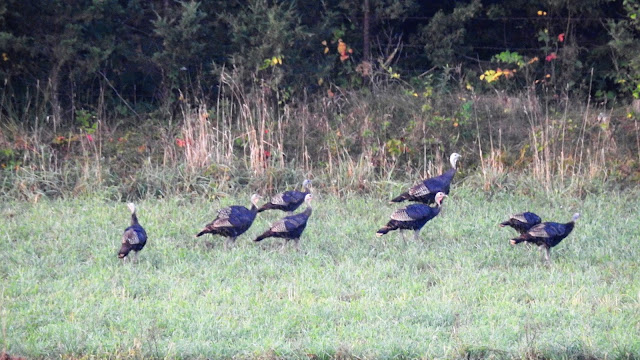