Yesterday, was computer class day. There were several of us who met in the library and we had a lively discussion about several computing issues. I always hope they go home with at least one new piece of info. The truth of the matter is I probably learn as much as they do. It keeps me on my toes and challenges me to learn new things...like Windows Vista (Grrr)and sometimes my memory is challenged as well when someone asks me something I know very well but I just have to bring it to the fore. Anyway, I had a good time and hope they did too.
After that I went to Llano Grande RV Park in Mercedes TX to meet up with Cathy Gleason who shares my love of Swedish Weaving. I met Cathy online through a Yahoo group of Swedish weavers. We ask questions,get ideas and inspired by the works of others. Cathy and I had a great time talking over our projects and also our lifestyle as Cathy and her husband John have been doing the same thing we have only longer. They have been full timing for 8 years and we are going on 4. I am amazed the difference the Internet has made in our lives. It numbers in the hundreds the people I never would have met otherwise. While I was visiting Cathy, Butch and his foursome were playing golf and when they finished Butch and I went to Harlingen to help his sister Marlene and her husband Bernard with some electrical issues. And then they treated us at Chili's. We had a full but fun day.
Posted by Barbara Brooker at 12/15/2007 03:57:00 PM No comments: Links to this post 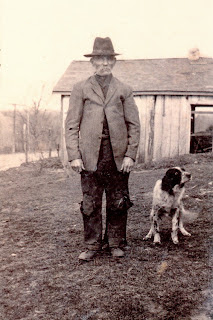 A couple in the park asked me if I could do some adjusting with this old picture they had been given. That is right up my alley so I had some fun doing that. Great picture too. Don't ya think?
His name is Mr. Aubrey
Other things we did yesterday.
1. Paid the electric bill
2 Went to McAllen to upgrade our Verizon phone. Shopped at Wal-Mart and Sam's Club and we will not be doing that again until after Christmas. It was a mess! Why do people shop with their entire families? There are clusters of 10-12 people in every aisle clogging up the works. And despite their commercial saying otherwise Wal-mart had about 10 checkouts out of 24 in operation.
3. Went to Gonzales Burgers for lunch. We cut our cheeseburgers in half and had half for lunch and the other half for supper. They cost $3.50 each. Taste great and a bargain to boot.
I am sure we did other things too like talk our walks an Butch played pool..always does at 6:00pm. It was a busy day.
Posted by Barbara Brooker at 12/13/2007 11:23:00 AM No comments: Links to this post