Ramblings-
I like to write now and then. Lately I have been busier than Lucy and Ethel in the candy factory and have lacked the time and inspiration but today is the day. We had a great trip to San Antonio.
Alex our tour guide did a super job and that boy knows his history. A couple of items of note that he told us is that in the US most of us think we are being flooded with illegal Mexican immigrants. He told us that only one in ten is Mexican the other nine are from Central and South America where conditions are even worse than in Mexico.
Have you seen the cars being towed as you make your way south to the Rio Grande Valley and wondered about it? I have. Sometimes you will see fifteen towed vehicles all lined up together. In the past I have called them Mexican trains being somewhat facetious but it seems I am wrong again! They are from Central America. They can come to the US and buy used and wrecked cars cheaper than in Mexico and tow them back to Central America, fix them and sell them for a nice profit. There are times when your perspective gets altered.
I picked up a pesky head cold while in San Antonio but I am now in day four and on the mend. I am feeling much better this morning. When I get a head cold I give in to it and sleep a bunch and am not active. It seems to shorten the duration...that and Zicam. Don't know about Zicam? It is an over the counter medication that promises to shorten the duration of a cold...and it does. Do a google on it if you want more info.
I have been asked what we will do Christmas day since we are far from friends and family. For one thing we have our park friends here and Butch's brother, Bill and Jo Brooker are here too. We have a dinner in the hall with all of our "new best friends". There will be about 150-200 people there. It is supposed to be warm on Christmas Day (78) so we may play shuffleboard. I have been so busy lately I would not mind just kicking back and not do anything but I doubt if Butch will let that happen! And of course we will call and chat with the kids.:-)
Granddaughter Amanda graduated summa cum laude in December from NWMS and she has a teaching contract already! She will be teaching first grade in Harrisonville MO. She is excited and we are excited for her.
I am doing a computer class in the park this year and the number of students varies each week from 6-10. It is for beginners but the old hands that come in sometimes learn a little too. We have a WiFi hotspot in the park at what is called the little hall and those with a wireless laptop can sit in comfort and do their Internet business-check email, google searches etc. on a high speed connection. It does not reach beyond the building but is nice for those who have had to go out of the park like to the library for it in the past.
Butch has hardly been home since we arrived in the valley. He is playing bridge, cribbage, poker and once in a while euchre. Also been shooting some pool and there is shuffleboard and of course golf as often as he can. In between he plays spider solitaire, freecell or mahjjong on the computer.
This past year so many of you have kept up with us on the blog that I have passed on the traditional Christmas letter. I did send one to the folks I know who are not connected to the Internet and that list is very short this year. This year Butch and I have done exactly as we had planned to do for what seemed like a very long time. We have enjoyed it thoroughly and plan to continue as long as possible. We have plans next spring to head east but those plans are not set in concrete. We will see what spring brings.
We wish all of our friends and family far and wide a very Merry Christmas and Happiest, Healthiest New Year.

Butch and I went to San Antonio to see the Christmas lights along the riverwalk, the Alamo and the Texas museum 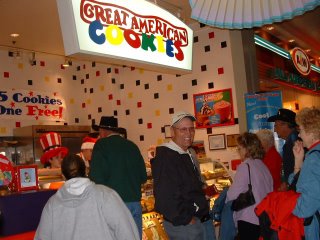 of 3 cultures. We had been there 16 years ago but thought it was time to see it again and it was well worth the trip. We took a bus tour with three other couples from the park. Here Butch is being bad with cookies.

Bob U. and Butch in the Alamo courtyard contemplating the 140 year old live oak. 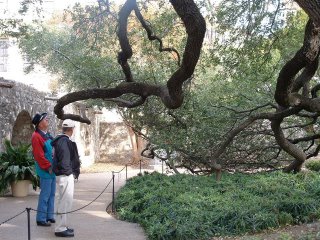 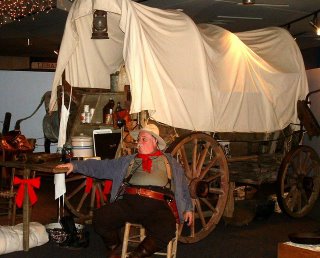 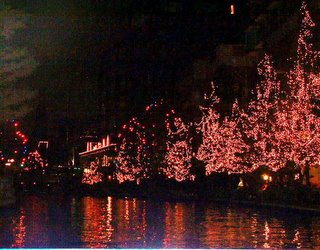 The trees along the Riverwalk 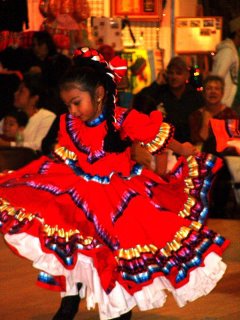