The laundry is done, flowers watered and our little home on wheels is fairly clean so we are having a leisurely Saturday.
Yesterday we watched a Netflix movie. License to Wed with Robin Williams. Don't bother...it just plain irritated me for the first half and the second half was only a tad bit better.

Last night we went to the new Mexican restaurant in Jefferson....don't bother...we were there approximately 2 hours and that was understandable because they were newly opened and extremely busy but then when we were served our CHICKEN Quesadilla Fajita it was a miserable disappointment. The tortilla was like dried out white paste.

I am accustomed to bubbly browned almost flaky tortillas which is how they are when properly prepared and my first slice contained NO chicken. There may have been a total of 10 pieces of chicken in the whole thing each the size of a nickel. Butch can go there if he chooses but they have lost me as a customer. I will wait till we go to the land of real Mexican food where they do not disappoint.
Till next time...
Posted by Barbara Brooker at 8/30/2008 11:47:00 AM No comments: Links to this post 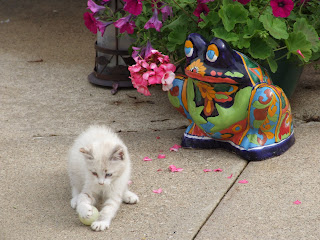 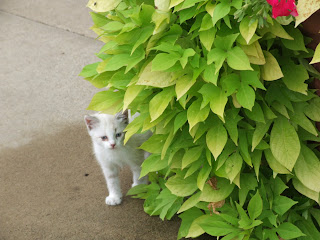 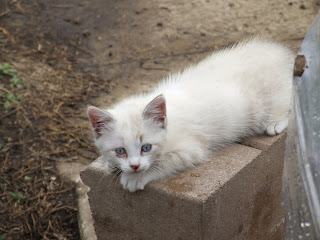 This kitten needs a name...any suggestions? Email keep.movin.on@gmail.com
She...we think...is very active, likes to tumble,play ball and fight with her Mamas tail. She plays a mean game of soccer too. She is shy preferring her Mama's company to that of big scary human's with big voices.
Posted by Barbara Brooker at 8/28/2008 10:20:00 PM No comments: Links to this post 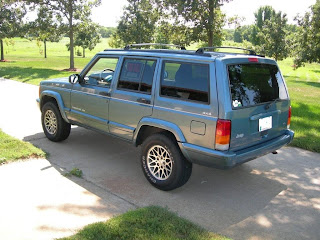 Leo has a car for sale and it is listed on craigslist.
Leo said it ran so well he is tempted to keep it but they do not have a need for an extra vehicle Click on "For Sale"
Posted by Barbara Brooker at 8/27/2008 12:51:00 PM No comments: Links to this post 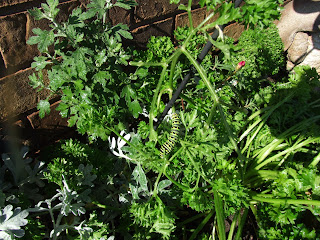 Sunday we played golf with Laura and Jason. First time I had played since March or April. Butch said I am disgusting...going that long and then playing well. As long as I do not put pressure on myself things seem to work out okay.
I gave Leo and Keri's hanging baskets a major haircut yesterday. It is a good way to give plants that have started looking a little leggy new life. In two weeks time they will look all perky again. While I was watering I noticed a wormy friend in the parsley so I took his picture. It seems they like parsley too. No, I did not remove him and squash him like a bug!
I let Angel out yesterday while I was grooming the hanging baskets and Stubby decided to come into the motorhome. Angel took exception to his presence and kicked some Stubby butt. The fur flew...mostly Stubby's. I do not think I will leave the door open again.
Today we plan to go to friend Mickey's in Clive. Butch will be doing some electrical stuff for her while we visit. Mickey is a friend from childhood that I have stayed in touch with throughout the years. We always seem to be able to pick up where we left off each time we meet. Yesterday I made some creamy cucumbers from Mickey's aunts recipe and they sure were good. So here is the recipe! I also added some dill weed.

Slice Cucumbers and onions. Layer in a dish and lightly salt each layer. Combine
dressing ingredients and pour over cucumber/onion layers. Refrigerate for
several hours before serving.
Posted by Barbara Brooker at 8/26/2008 06:55:00 AM No comments: Links to this post