We are in Jefferson Iowa

We arrived in Jefferson this morning after our final doctor appointment. We both received good reports on all fronts...except I have been encouraged to schedule a colonoscopy for this fall. Hmmmm... that and a mammogram. Sounds like fun huh?
Now I have to get that out of my mind so I can have a fun summer.

I was looking over a back up CD and found this poem. I do not remember who sent it to me. I am sharing.

They sings of the men as goes down to the sea;
Of the heroes of cannon and swords;
An, writes of the valors of dead chivalry,
An, the bravery of old knights 'n lords.

They sighs 'cause the romance of knighthood is past
'Cause there ain't no ideals any more;
They says that this world's a rollin' too fast
To develop that "esprit de corps."

But them as complains are the ones as don't know,
Who sits loose where it's warm and then kick -
They ain't never seen a line saggin' with snow
An' had to get Service back - quick!

They ain't never struggled with Death at their side,
A-snappin' and hissin' and pale -
Nor clung to the towers and grimly defied
The assaults of the blizzards and gale.

They sit and are served with never a thought
Of the fellers out pluggin' like hell -
To supply at their touch the service they've bought
With a light, or the sound of a bell.

These fellers ain't togged out all shinin' in steel.
They don't ride around on no hoss -
They don't sing no songs about how they feel
In the gales when the feeders may cross.

They don't wave no banners embroidered in gold,
In Latin nobody can read;
They don't do no bragging of deeds that were bold,
Their motto is "SERVICE AND SPEED.'.

Their armor ain't nothin' but slickers an' boots
Their weapons are climbers and pliers
Their battles are fought up where hi-tension shoots
An' Death lurks unseen on the wires.

They're fightin' the gales and the blizzards an 'ice,
Protectin' the towers and span
With effort no measured in hours or price
For one Cause - just Service to man!

So here's to the Lineman - The Son-of-a-Gun
That can do without sleep for a week!
That sticks to the job 'til it's every bit done
And the feeders can carry the peak.
For his is that Knighthood that's noblest by far
That highest and mightiest clan,
That's fightin the battles of Things-as-they-are, in the cause of the Service of man.

Contributed by TradeMasters (Bruce Masse) bmasse@axionet.com
Posted by Barbara Brooker at 5/07/2009 10:20:00 AM No comments: Links to this post

We have most of our appointments taken care of. Butch had his teeth checked and cleaned. He has so many crowns there isn't much that can go wrong there.

Our blood draws have been done and we both have good results on all counts. I thought the "Candy Man" might have to pay the piper for his bad habit but since he follows me around on our walks all the time he has successfully dodged that bullet as well.
The Diabetic Education Center checked out my meter and my results were all in range.

Our eye exams have been done and we both will be getting new lenses and frames.

TIP: If you or your spouse required safety glasses for their job you both may be eligible for safety lenses and frames. Considerably cheaper. The only negative is the selection of frames is small. I would much rather pay $150 as opposed to several hundred.

Angel had her Vet appointment yesterday and she got her vaccinations for rabies and distemper. She has been off her feed today. Hopefully she will be back to her normal self tomorrow.

One more appointment on Friday with our Family doctor to get our prescriptions renewed for the year and then we will be good to go for a year.
Posted by Barbara Brooker at 5/06/2009 06:33:00 PM No comments: Links to this post 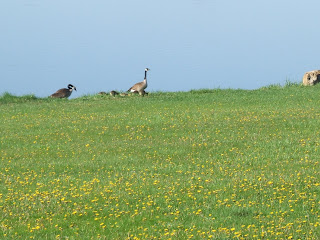 This little girl had a real fascination with the water and this spot in particular. Every time we went for our walk this weekend she was peering into the water 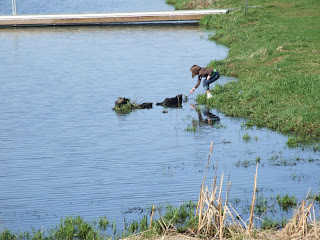 Connie says "No" to a picture but I think she looks pretty darn good. 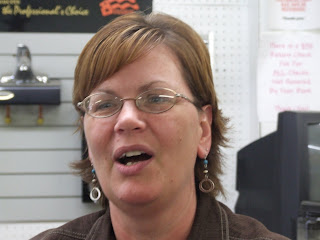