Back on my bike

The truth be known I would not have been on it had Jason not come over to give me a boost in the right direction. The trail is wonderful this time of year. You can see things you cannot at any other time of the year. It felt really good to have the sun in my face while flying like the wind. 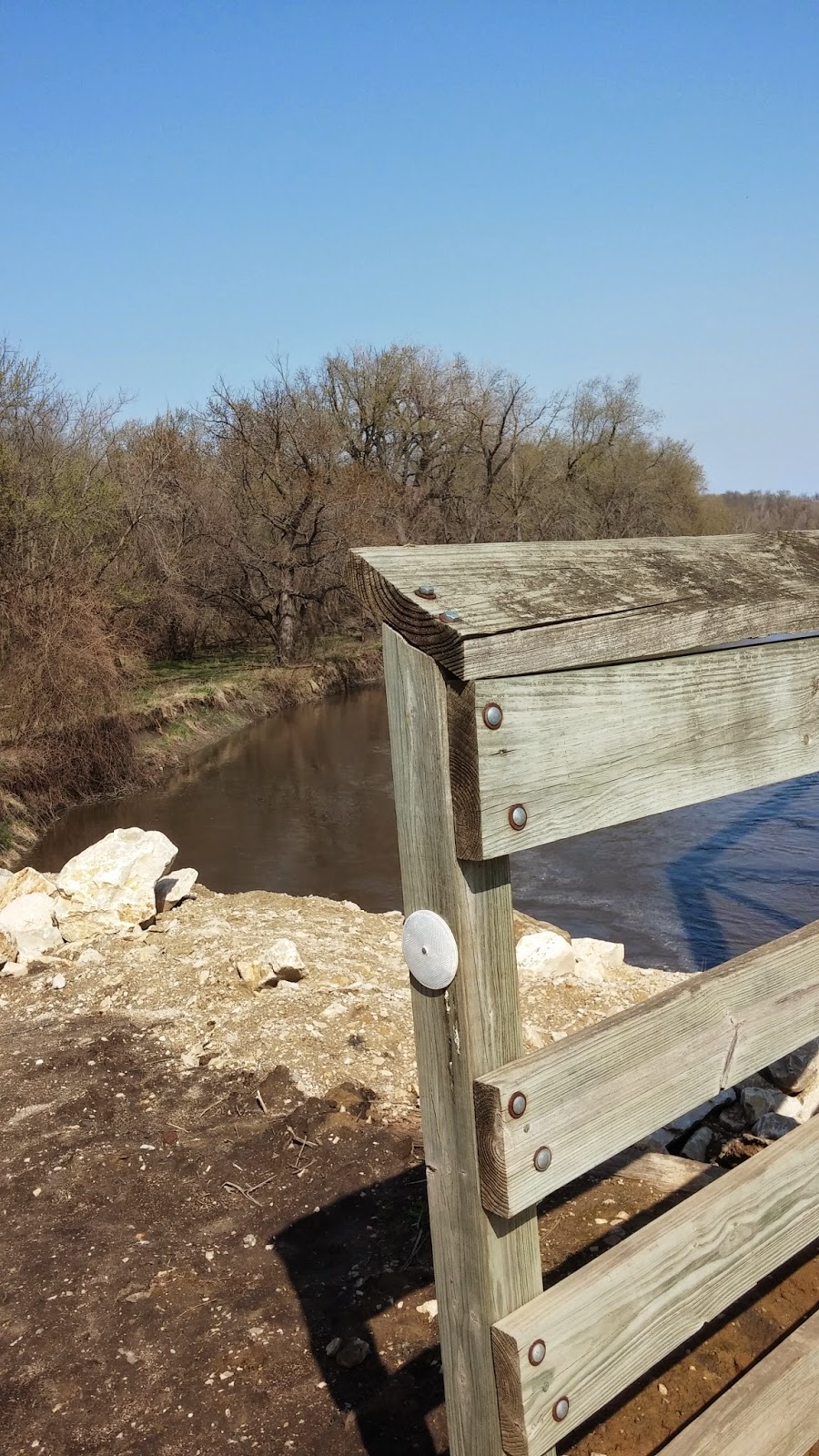 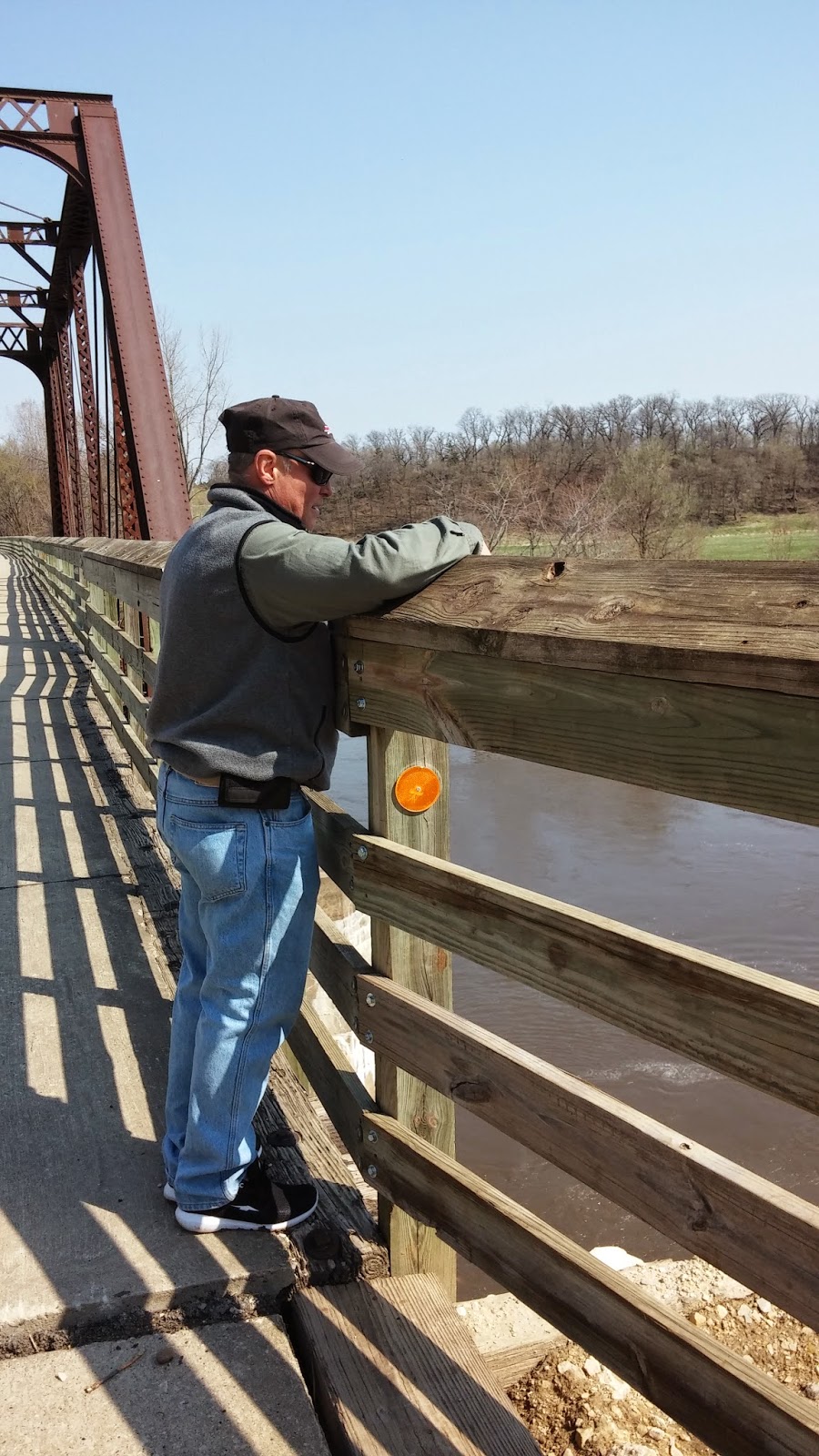 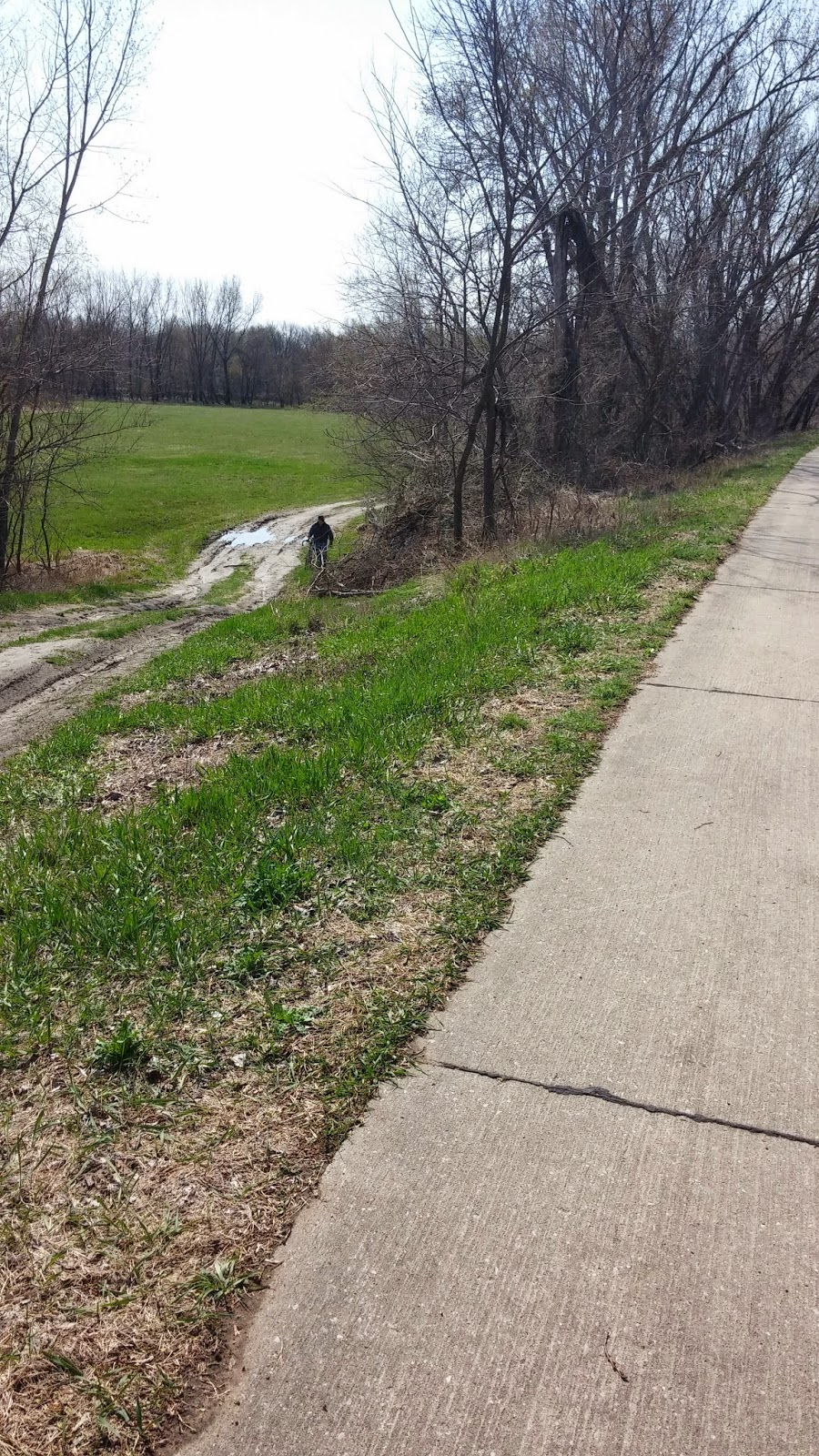 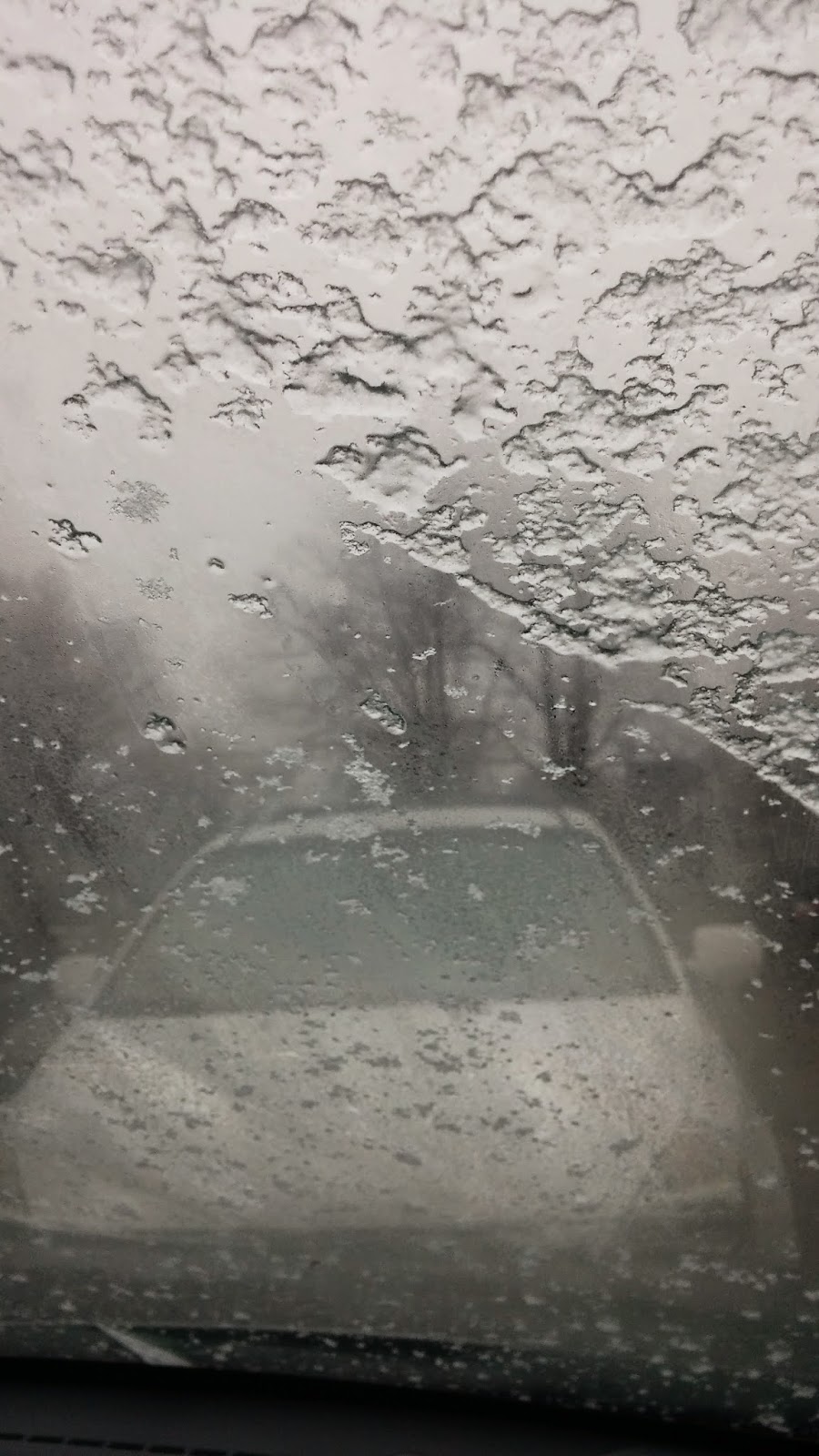 Yes, that is ice on the windshield and after this it turned to snow!


Elise was tired but a real trooper when it came to play practice. This first picture she looks very doll-like to me and perhaps as tired as I thought she was. 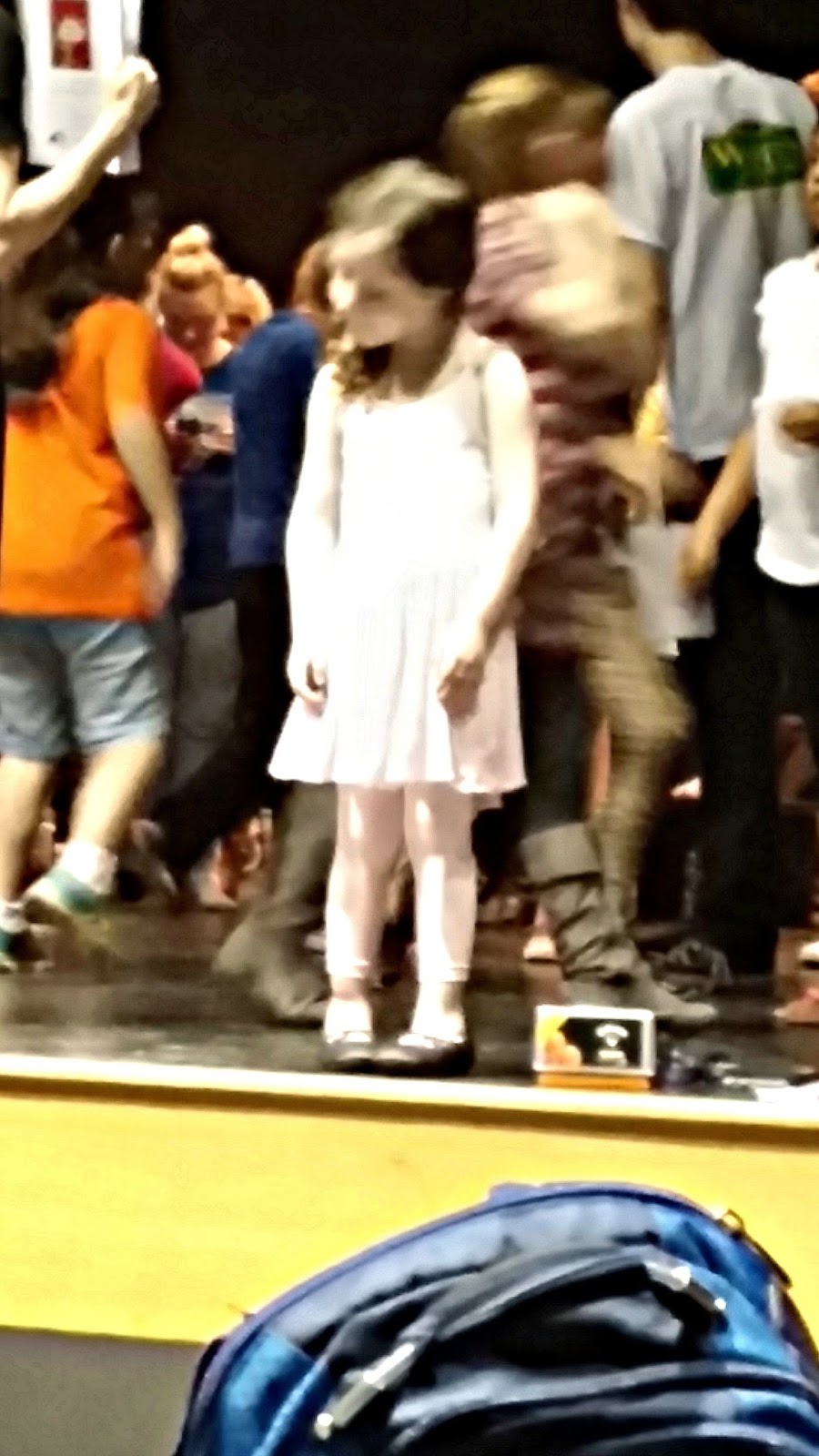 She knows the songs and most of the time remembers what she is supposed to do. She is the youngest member of the cast at 4. She will be 5 next month. 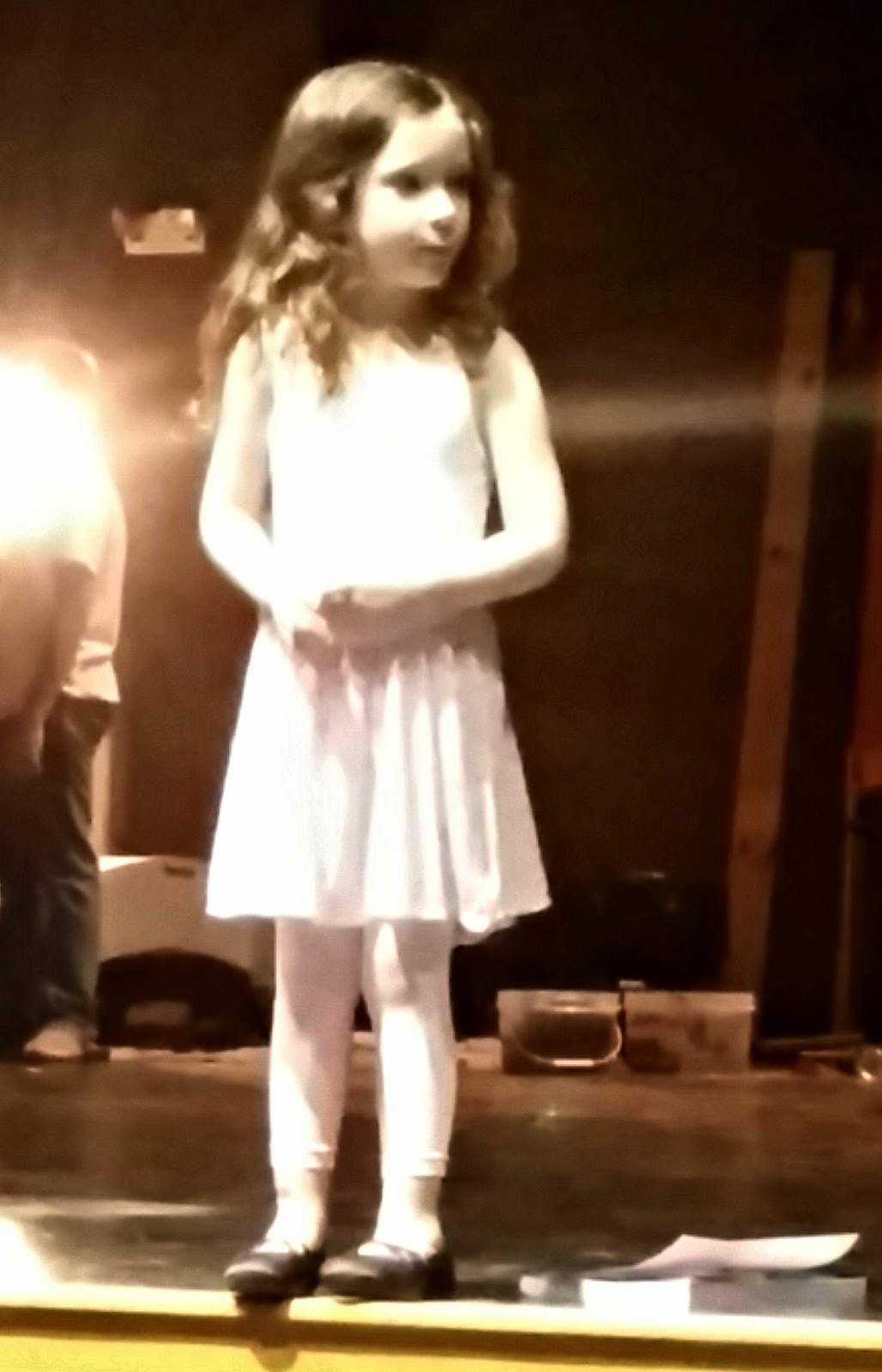 Back Photo Catch up

Whispering Pines Village- Sebring FL
The gal in the middle is in her 90's and her name is Rachel. She is the official park hugger. 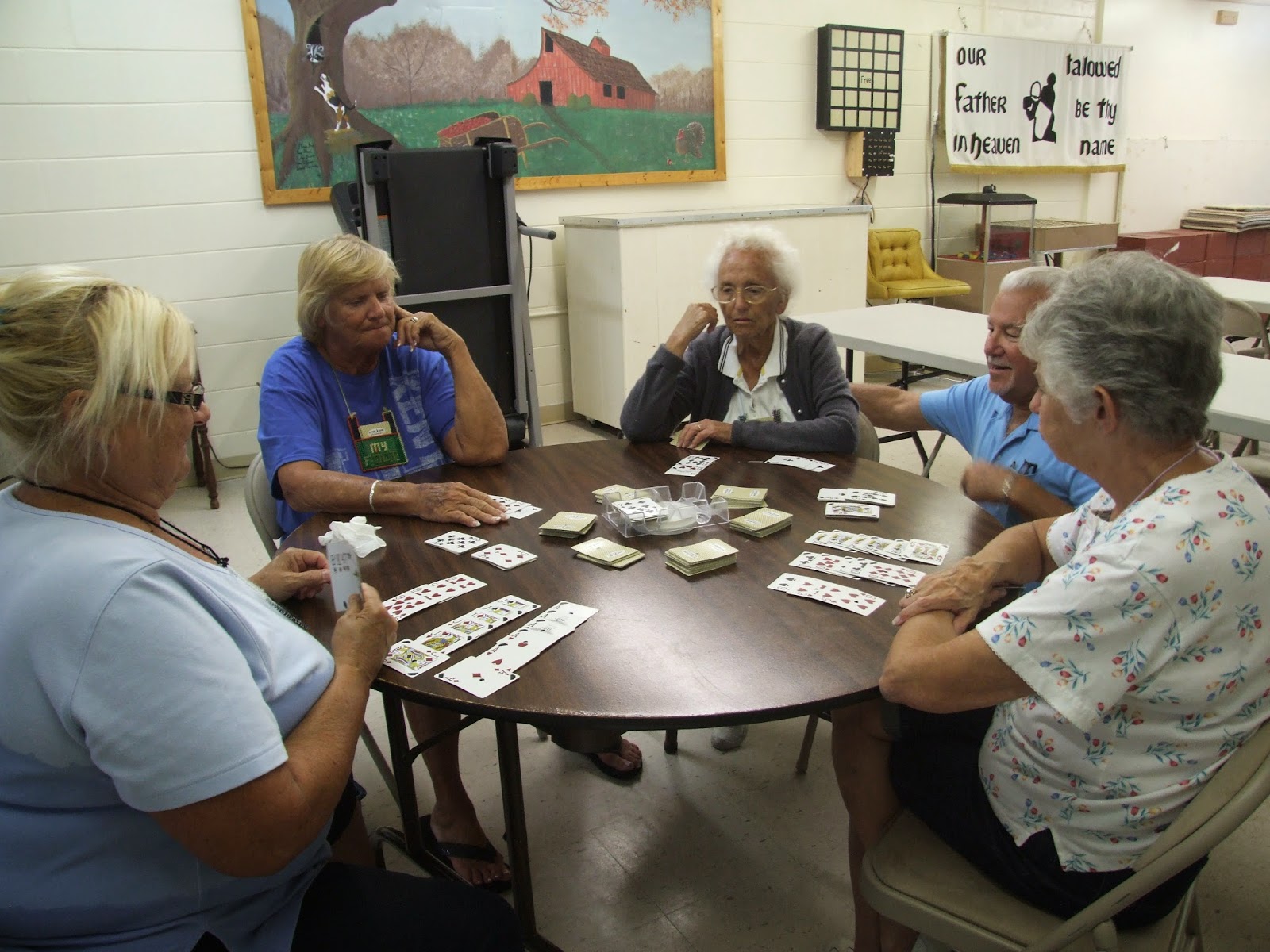 There are two pool tables and they get regular play with amiable fellows. Butch thought they were in good shape overall, but could have benefitted from some TLC. 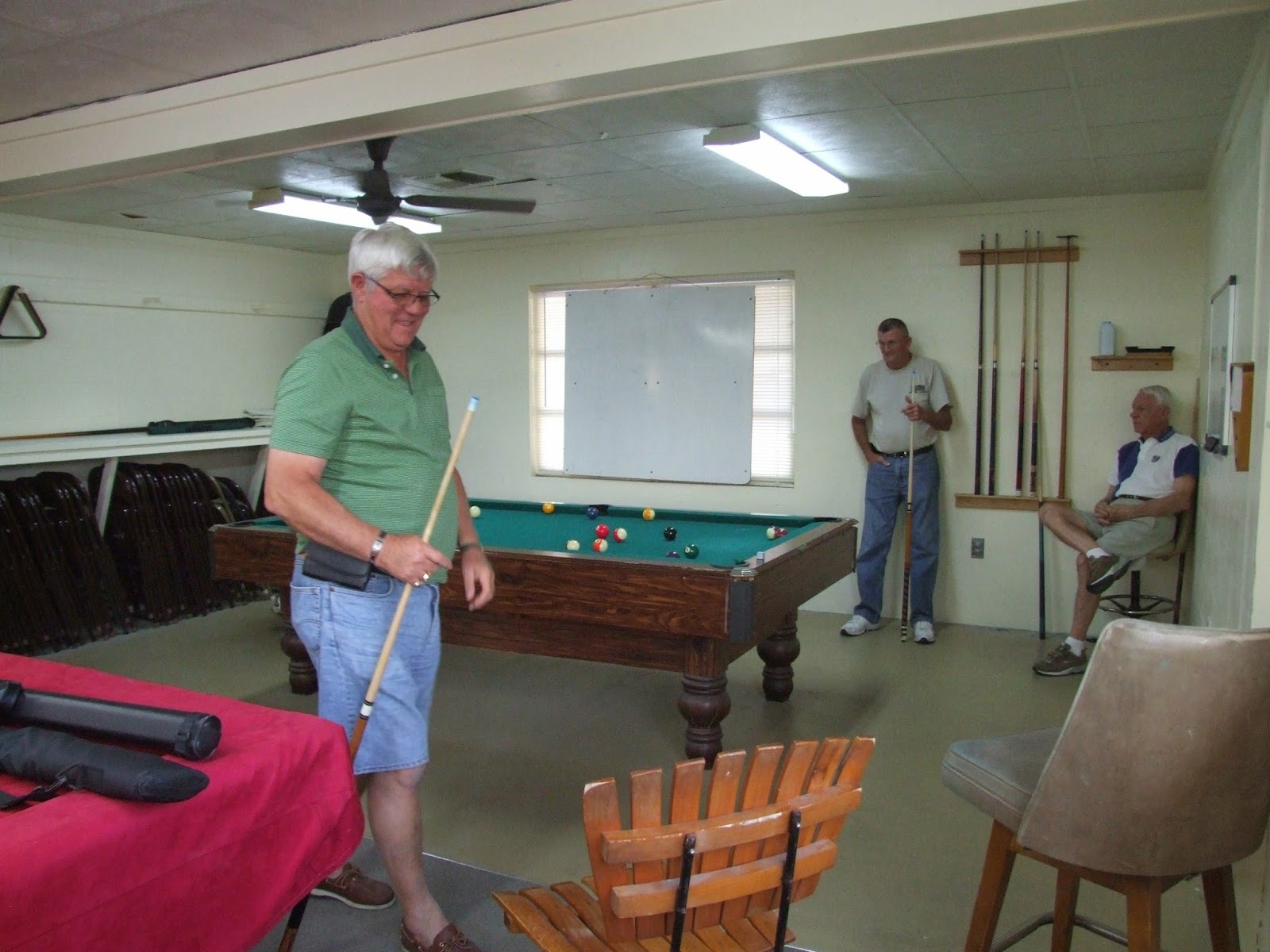 Butch played once while we were here. 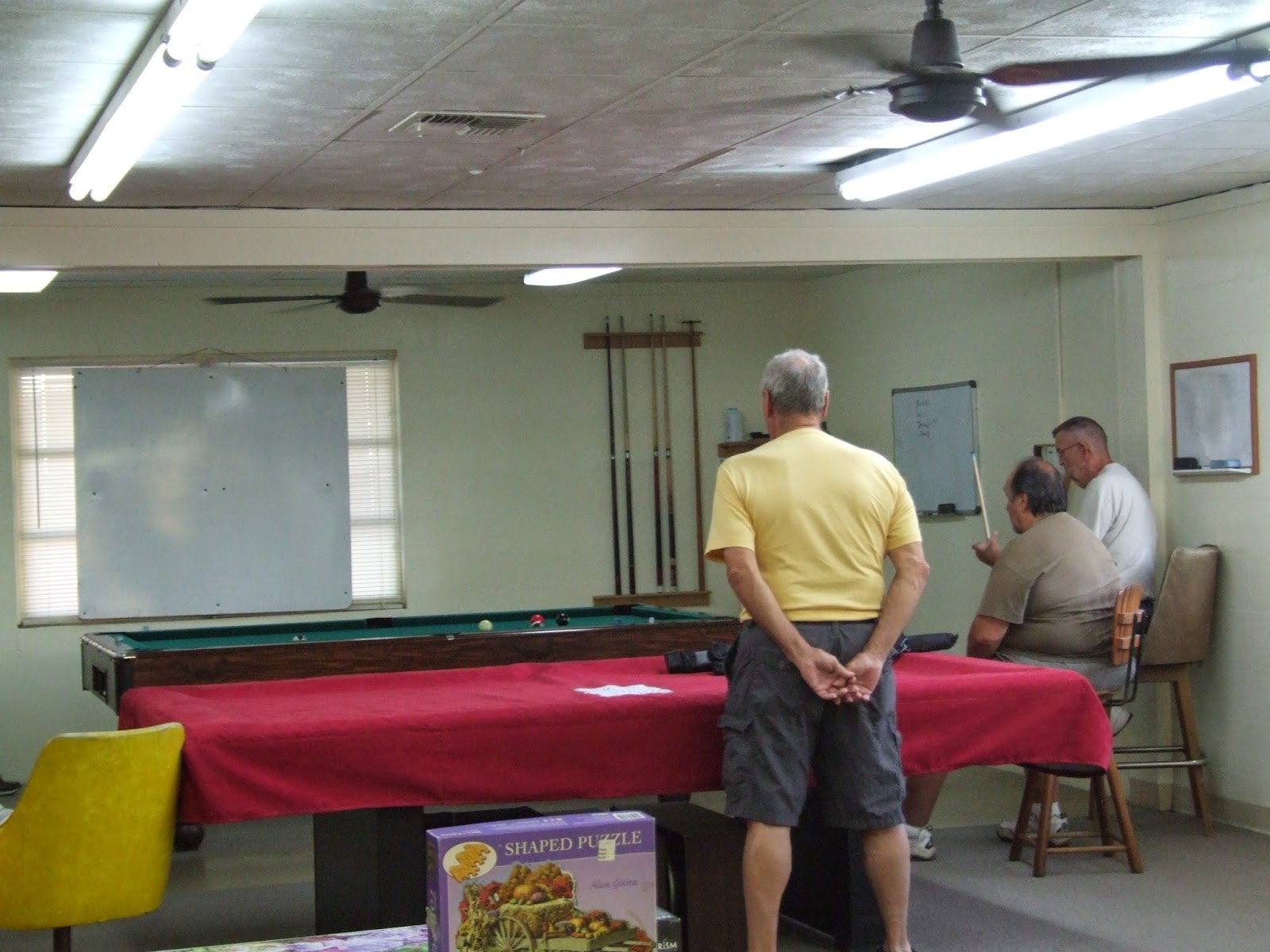 The guys visited a car dealership where Eddie Munster was the star attraction.
He took the camera and took these shots. 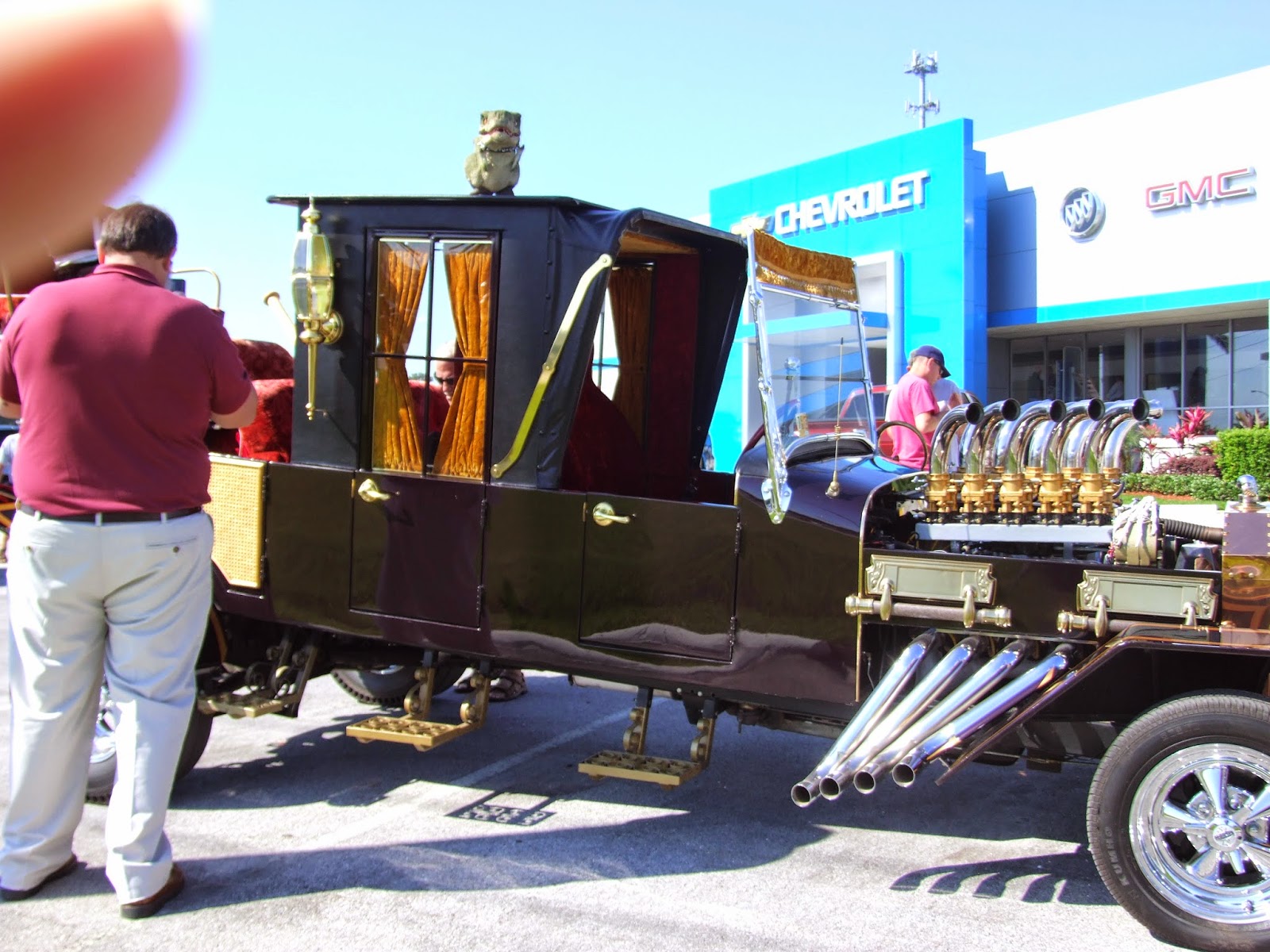 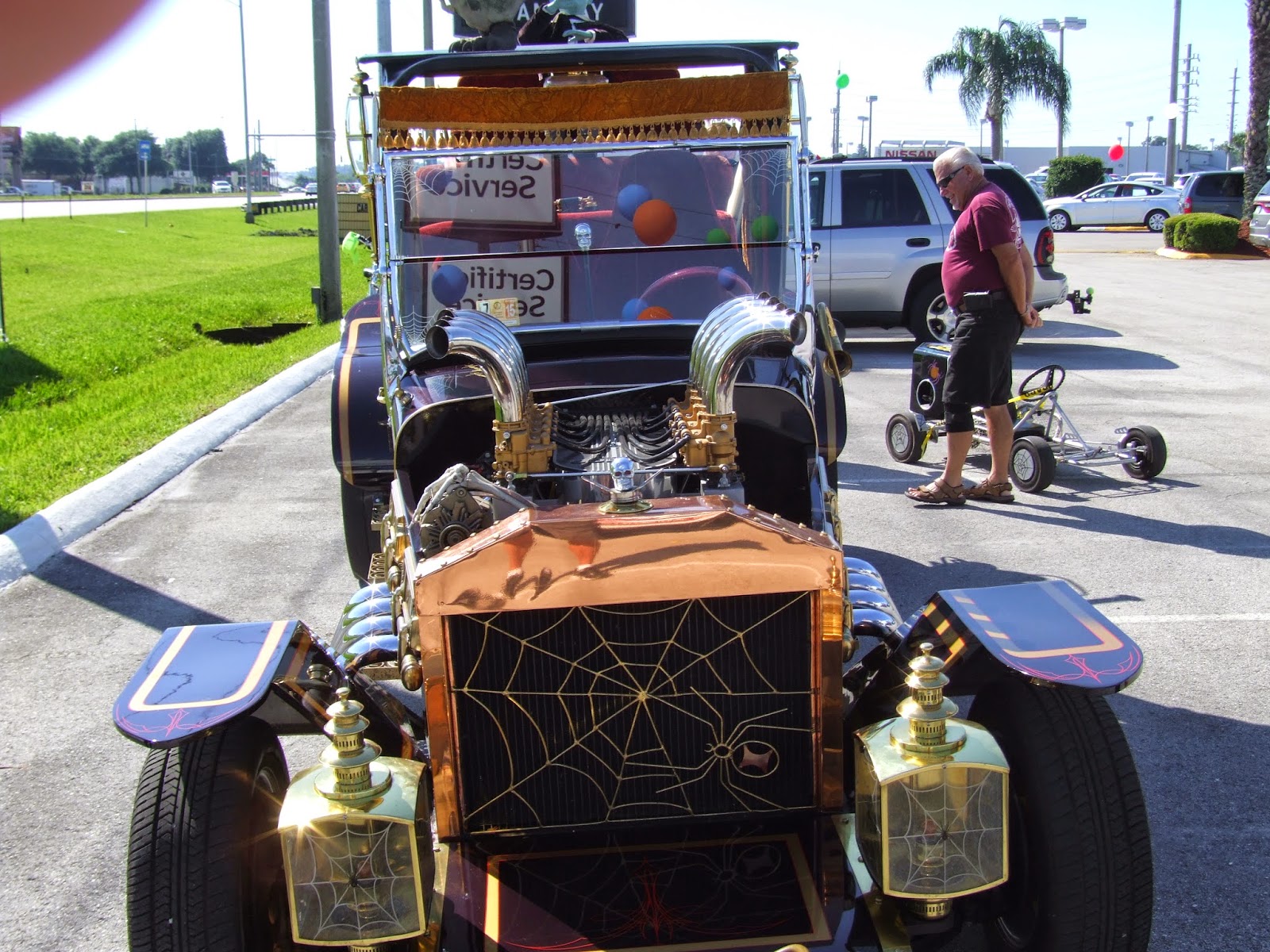 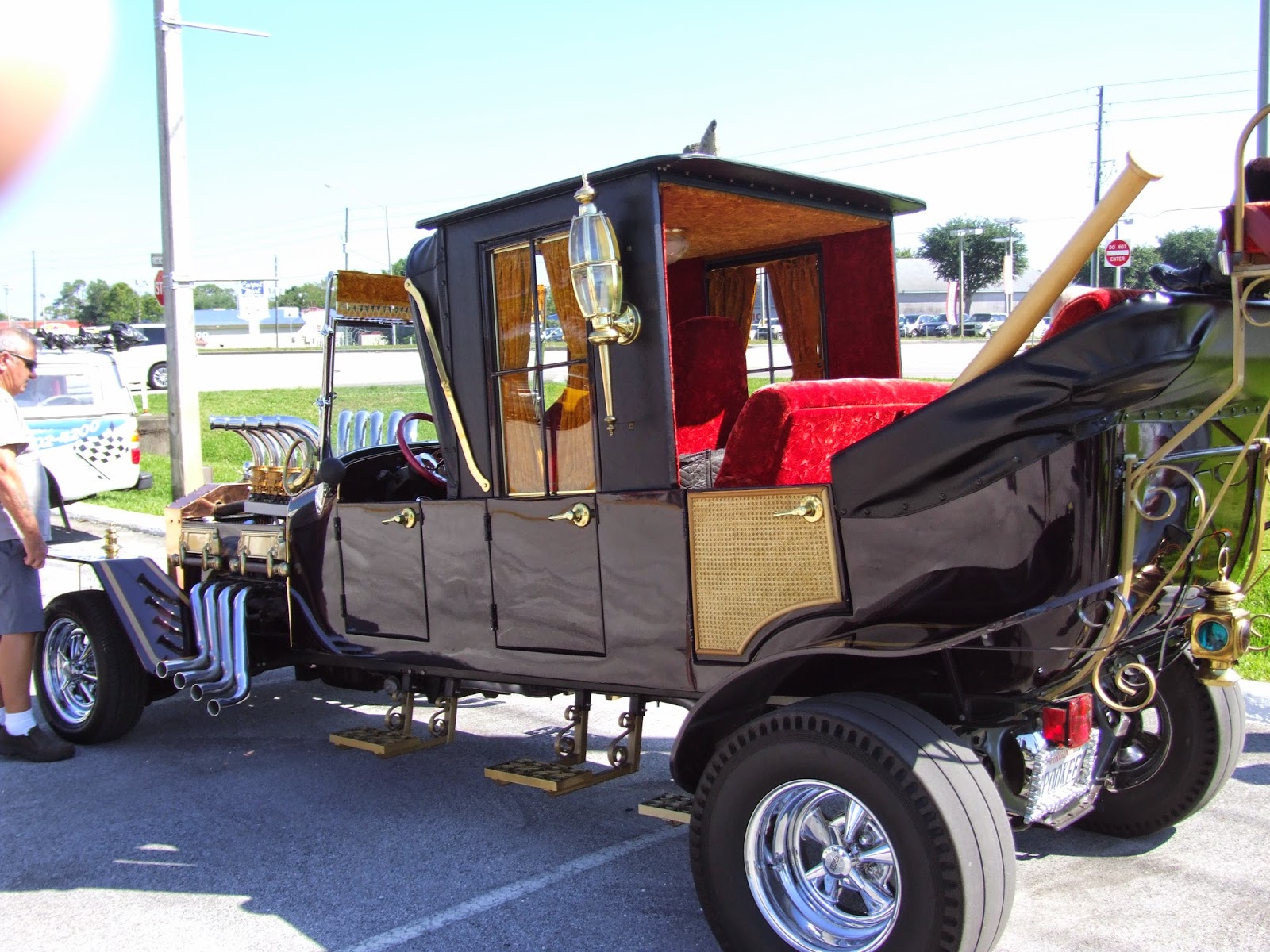 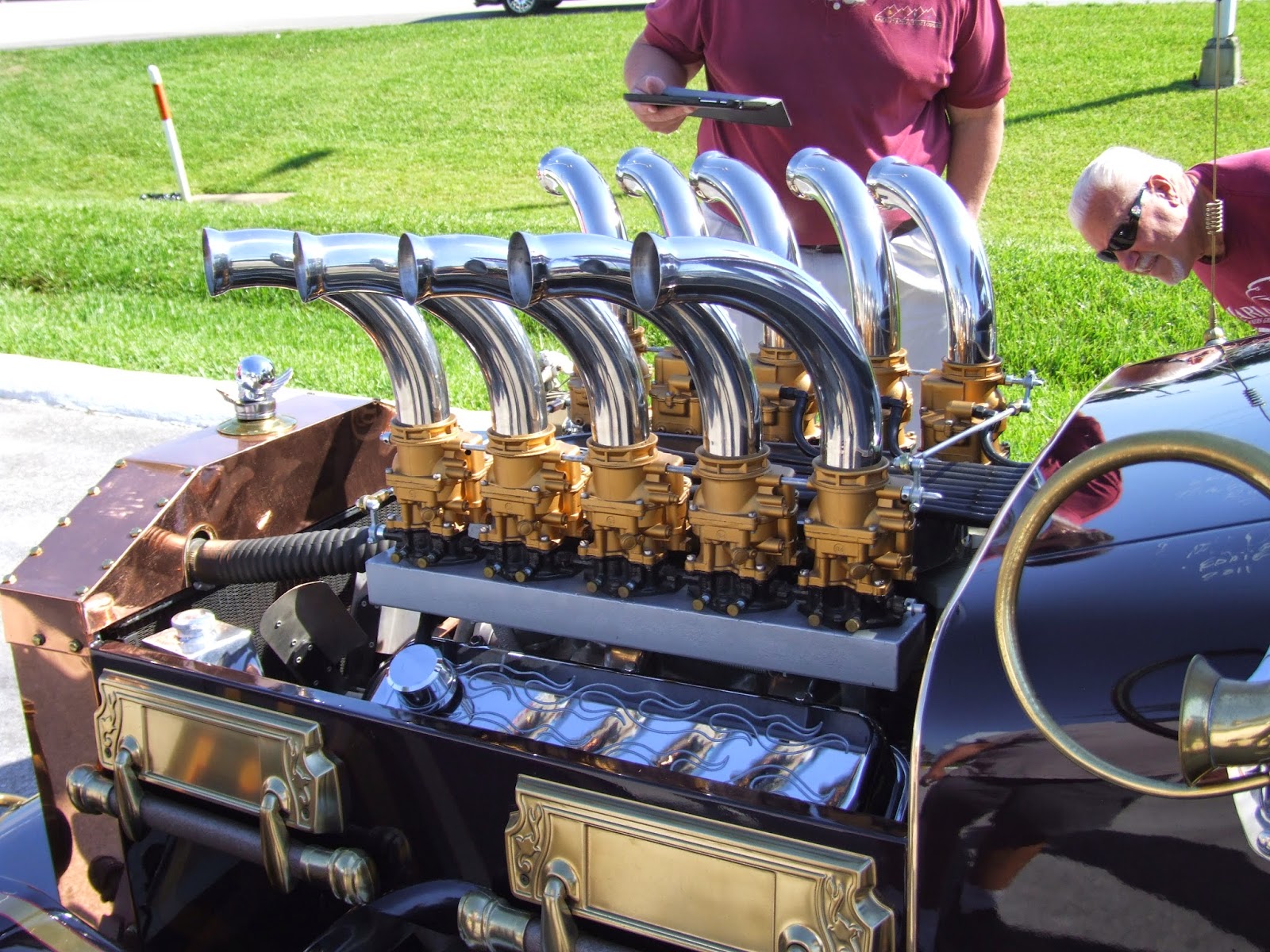 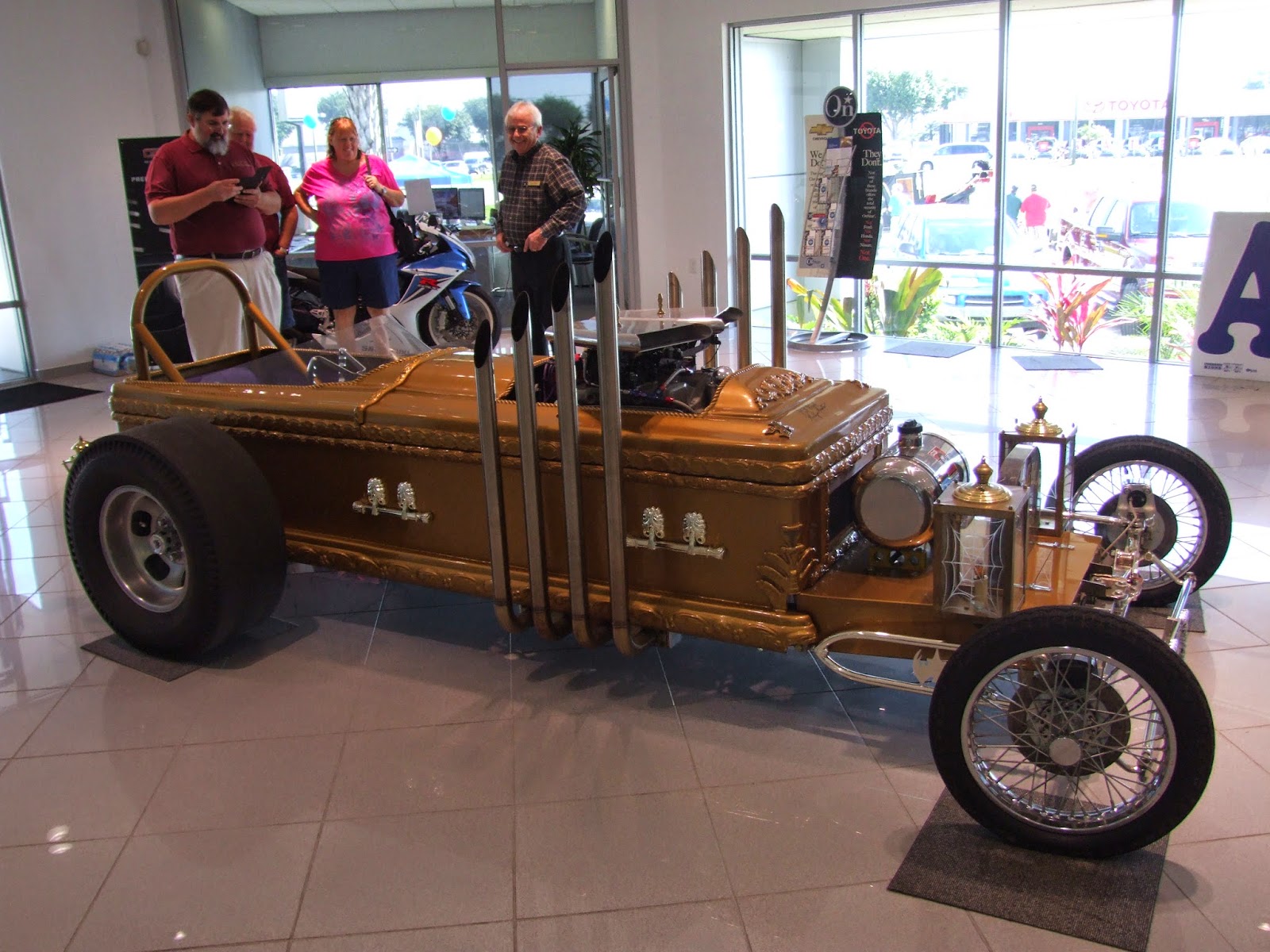 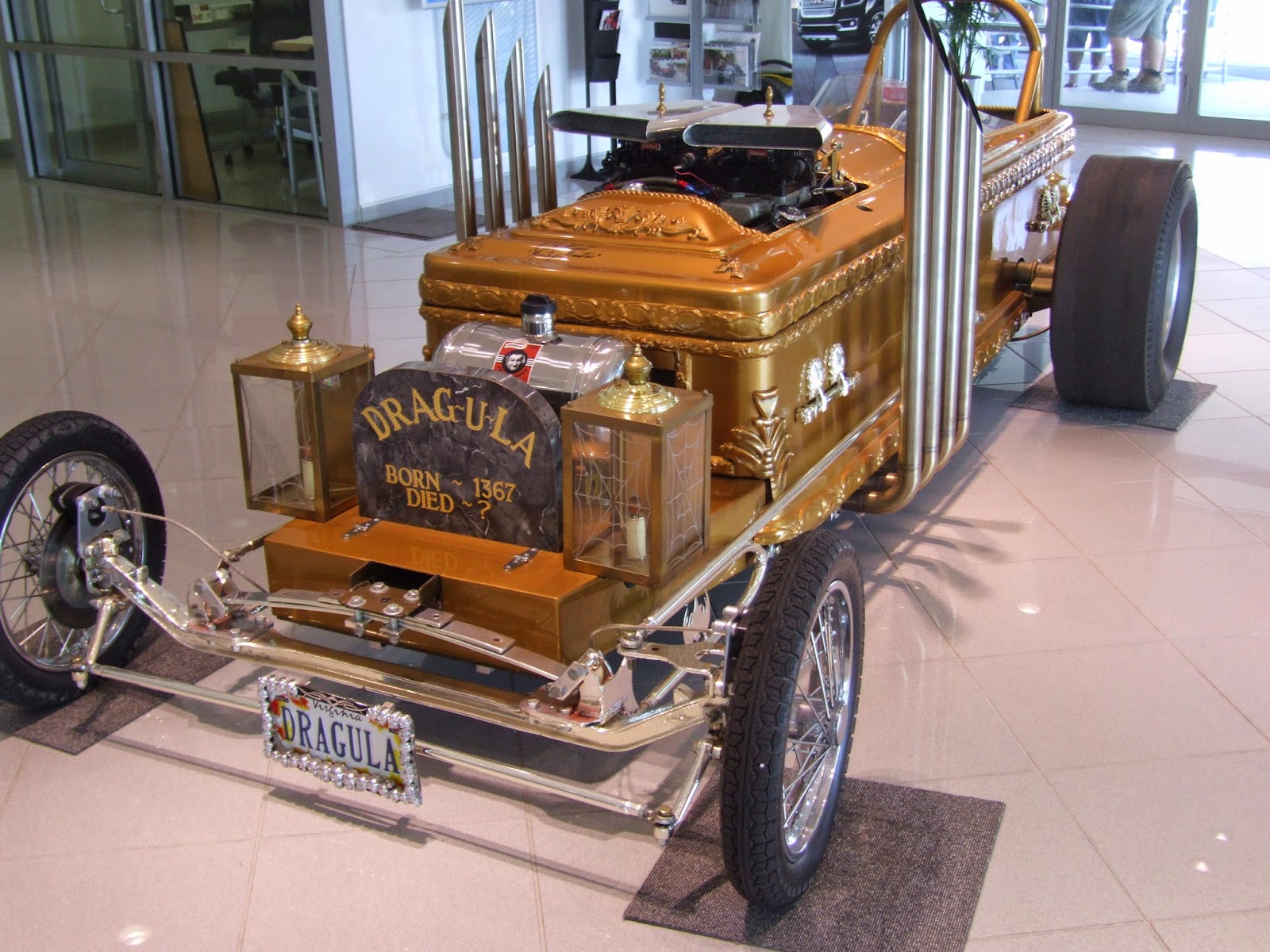 These were catch-up photos taken before we left Florida

Home  April 9th, 2015
Written on the 10th.
Arrived home yesterday about 3:00pm. Had a bit of a rough start because Butch had trouble getting his brain running on all cylinders, forgetting to hook up one side of the tow bar. He noticed it right away and we were able to get things working after quite a bit of finagling on his part and praying on mine. If he had been unable to get the tow bar working properly it was going to mean I would have to drive the car home from Kansas City. Not something I wanted to think about.
Started out in 80 degree weather with a southern tailwind. Stopped at Bethany MO at Casey's truck stop where diesel was $2.39. That is a very nice set up for motorhomes and truckers and we want to remember that fact. Add to that the good diesel price and a very nice Subway shop and it was very much a pleasant stop.
After we crossed the MO/IA line the clouds started looking stormy and sure enough they rustled up a heavy downpour. We happened to be fairly near a rest area so we stopped to let the storm pass. After that, the temperature started to drop and we were in drizzle much of the rest of the way. When we arrived in Jefferson it was wet, cold, windy and miserable. Temp was 47 and dropping still. Filled up at Sparky's and decided to look at the alley to see if we thought we could get into our RV spot in the backyard without getting stuck or making ruts. We may have been able to but decided to not take the chance parking it at Leo and Keri's place until it dries up some. We checked out the new Hy-Vee grocery store that has a Market Cafe. It is a sit-down restaurant and very good. Butch had an IOWA tenderloin and it was excellent. I had a pulled pork sandwich but after seeing his tenderloin that is what I will have next time. We feel very fortunate to have this store so close to us. Oh yes, and while we were eating supper it started to snow! Yes, SNOW!. Most of it quickly melted but there was a skiff on the grass this morning.
Today we are trying to take care of details.
1. Water turned on
2. Internet turned on (not yet, but soon I hope)
3. Mail picked up
4. Talked to State Farm about deer accident and windshield chip. (more later)
5. Pick up more needed stuff like tools, meds, etc. from the motorhome.

Deer accident: Damage was more extensive than first thought. The radiator is bent and the AC condenser is damaged from the impact. Looks like in excess of $2600 damage. The radiator is still working, but the AC is not.

Also it seems our neighbor to the south is in jail and will not be getting out anytime soon. It seems he could not pass up stealing a pickup he happened across that had been left running in a driveway. He was quickly arrested and then it was discovered he had been making Meth in the basement of his rented house the one just south of us. We had never smelled anything suspicious although his behavior  and that of his friends always was erratic and a bit bizarre. When we first met this guy (Andy), Butch asked him what he did and he said he was disabled. He did not appear to be disabled in any way unless you count poor judgment as a disability. He never had or drove a vehicle, either walking or biking where he wanted to go. All the windows were completely covered and the AC run all the time. The only time the lawn was mowed was when we went to the city and complained and then his landlord would see that it was mowed. I think the prison system will be in charge of his day to day life for quite some time.

Tomorrow is our last travel day

I had such good intentions of keeping up with info. Throw that out the window.
I may resort to backtracking on occasion.
Left on Sunday
April 5th-Sebring FL to Quincy FL 400 miles
Travel Day 1
We left Whispering Pines Village in Sebring FL at 7:45 AM with 400 miles planned. Sundays are usually good travel days but we found out that Easter is an exception! The church traffic was awesome and unexpected. Fortunately, both times we encountered it the flow was going opposite of us. Think of a 5 mile funeral procession and that was what it was like. We knew this because they all turned into the same church lots. Darndest thing we have ever seen. Really? They all decided to go to church at the same time?

We took a back way out of Sebring so we did not have to deal with 97 miles of stop and go traffic on highway 27. It added miles but so worth it. We also did not count on Interstate 75 being under construction and so very busy. Truck traffic was less but car traffic was HEAVY! It was such a relief to turn west on Interstate 10.
I used the smartphone, Google Maps and navigation and it has made things so much easier for me. I am a much better navigator. Butch would say it was the lady in the phone but I do have to know what to say to her to get the right result. Other tools I use are RVParky.com or app. I have both. We are also Passport America members and tonight it is saving us $20. Participating parks are half price. It is also Passport-America.com or Passport-America app.
4:00 PM
We have arrived at Beaver Lake Campground at Quincy FL. Exit 174 on I-10. It is a Passport-America so our stay is $20. You check in and pay at the Marathon station. Cash only. They do not take reservations. It is always a first come, first served proposition. Being so close to the Interstate I can see why!

There is a Burger King within walking distance so I do believe we will be dining out tonight. I am so looking forward to getting a good nights sleep.

I remembered a bit ago what I was doing last year on Easter Sunday. We were in Peculiar visiting the Missouri kids and I was very, very sick. Glad that is in my past!

Monday, April 6th
Quincy FL to Vicksburg MS-451 Miles
A couple of notes about this leg. We changed our route enroute taking hwy 98 out of Mobile AL instead of going further east to hwy 49. It cut off about 40 miles but then we arrived at our planned destination (Hattiesburg) too soon so went further, making it to the Ameristar RV Park in Vicksburg MS. The park was difficult to find and unlevel. Will not plan on staying there again.
The area around Jackson MS has the worst road conditions we have ever been on!! Both south on 49 and within the city on I-20. It should be avoided. I think you should be able to sue the city for RV damage. It was awful. Shortly after that episode the clouds opened up and dropped over an inch of rain in a few minutes and we were in the midst of it.
We made it in one piece after two trips around in a circle before finding the park.  We did not go to the casino. Too tired after a stressful day.

Tuesday, April 7th
Vicksburg MS to Alma AR .-433 Miles
This was last night so I can remember it clearly. We stayed in the Crabtree RV Park. It is connected to an RV business. We were lucky because we did not have a reservation, it was easy to find with GPS, it was next door to a Cracker Barrel and we obtained the last available space! Now that kind of falling into place does not happen all the time. We are very grateful!! We are being watched and cared for in a very special way. We are happy and we know it!
We had planned to travel all the way to Shreveport on I-20 and then take US 71/I-49 north to Fort Smith AR. We have done this before and I didn't remember it as being all that bad. It does have about 130 miles of twists and turns. It was okay and Butch did well with it but I do believe twice is enough. Also, the Google maps/gps knows nothing of the new I-49. Does not show up when programmed.

I have some back pictures to post but as I write this it will not be happening until I have a good connection. So later look for "Back Pictures"

As an added note, we had a great time with Jerilynn and Pete. This was their first year in Florida and they were lucky enough to make some very good friends right away and they shared them with us. They are going back next year and have much more of the same fun. They have found a nice fit for them.