I had more darn fun with this program. Using different pictures etc. The close up picture of Butch makes me giggle every time I see it. Click on the link below to see what I am talking about.

Okay, I have a new chair. It is very comfortable...probably the most comfortable one I tried. Lots of lumbar support. It was very cheap...bought it at the flea market from Bubba's Furniture. It is new and the color (taupe) is okay. But it is too big!!! I think it might be my 'in the meantime' chair.
I will still be looking for a smaller one that also fits all the criteria but I will not be in a hurry to do so. If I stumble across the right deal I will have a chair for sale. One thing about it we didn't pay so much that it will hurt. It sure looks very different in here without the sofa but I am getting used to it.
Posted by Barbara Brooker at 12/07/2007 07:29:00 AM No comments: Links to this post 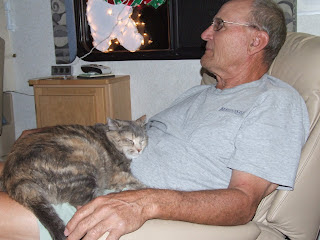 Angel does like a pillow for her furry little head
and Butch is happy to oblige. Played golf today and shot a 40 (9 holes) and I do not consider that too bad considering I play only on Tuesdays and only in Texas. Butch shot 35. It was okay for him but not cause for celebration.

Our sofa left the motorhome yesterday. I was concerned about how difficult it would be to get it out of here but it turned out to be not difficult at all. It seems the tougher part will be finding a chair that suits me. We shopped yesterday and I found a couple I could have lived with but let's just say I didn't fall in love. So we are still looking.
Posted by Barbara Brooker at 12/04/2007 08:18:00 PM No comments: Links to this post

We have been toying with the idea of selling the sofa sleeper in the RV and replacing it with a computer desk and comfy recliner. So before the park garage sale held yesterday I took some pictures of it and placed them on a display board. $1200 new-$300. We figured if it didn't sell we would try again next month. To be honest we didn't figure it would sell at any price and it probably would not have anywhere but here.
Anyway some folks came in and wanted to see it. A friend at their park had seen the ad and called them about it. So I sent them to see it and Butch handled the sales work. They said they would have to go take some measurements etc. But an hour or so later they called and said they wanted it!!
So at this point it is not in their possession yet but we are considering it sold. What a surprise!!
Posted by Barbara Brooker at 12/02/2007 03:13:00 PM No comments: Links to this post