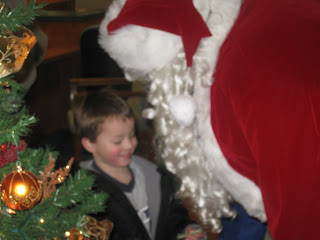 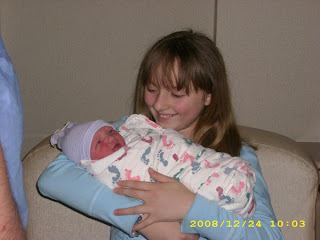 From Good Friend Connie who was blessed with new grandson Hayden now has a NEW GRANDDAUGHTER!!!
Here is the stats from Connie: Well our newest one arrived Dec. 24th at 6:41 pm She weighed 7 lbs. 10 oz and was 20 " long. Her name is Delaney MaKenna. She was truly a miracle baby.
Baby Delaney is pictured with her big sister.
Posted by Barbara Brooker at 12/25/2008 07:57:00 PM No comments: Links to this post

The Story of Rudolph's Secret Friends
By Amy Friedman

You all know the story of Rudolph's red nose
And the way that great reindeer led Santa through snows,
Through fog, sleet and cold on one dark Christmas night.
Oh, yes, Rudolph's nose gave off just enough light.

You know that the other deer taunted and teased
Poor Rudolph, who was not one tiny bit pleased.
You know that when Santa could not find his way,
It was Rudolph's red nose that saved the whole day!

You know that the reindeer were tangled and lost,
And that it was Santa who knew the great cost
Of losing his way in the fog and the cold,
And the story of Rudolph...oh that you've been told.

But you don't know the story of a dog so kind,
And of a swell chipmunk with a very quick mind.
Their names were Sweet Nell and Wonderful Godfrey.
And this is the story that they told to me.

See, none of the reindeer would play or converse
With our Rudolph, who thought he lived with a curse.
He cried, for he had not a single comrade.
Poor Rudolph, he was a sad lonely lad.

Then one day that chipmunk named Godfrey
Was scurrying along when he stopped at a tree.
He met up with Nell, with her wiggling tail,
And off those two trotted, when they spotted a trail.

They followed that trail – it was soaked with wet tears, And there was poor Rudolph alone with his fears.
"What's this?" Nell asked Godfrey.
"A sad deer at Christmas? We can't have this, Godfrey, We simply can't have this!"

"What's wrong?" Godfrey asked, tickling Rudolph's nose.
Nell wiggled her tail, then straightened Rudolph's bows.
"Don't cry little deer, for you know you will shine.
"It's Christmastime and you should feel fine!"

Well, Rudolph told those two the tale of his woes.
Blaming all of his troubles on his big bright red nose.
“I've no friends, no allies! I am far too weird.
"I've even tried growing a bushy red beard!

"We'll be your friends, Rudolph. We love your red nose.
"We love your sweet eyes and your festive red bows.
"We love you because you are kind and you're smart. "You're just like a reindeer should be – you have heart!"

"I'm a strange kind of reindeer with a peculiar hue.
"Just look at my nose – it's so red that I'm blue!
"Yet you say you like me?" And to Rudolph's surprise
Nell took a hanky and wiped her friends eyes.

And beginning on that cold day in December
--Now you listen closely, for you must remember –-
Rudolph learned exactly what most of you know:
That friends are the best things to have, rain or snow.

When Christmas came that year, all dense with thick fog, There right beside Rudolph were the chipmunk and dog.
But Santa did not see those two friends on that night,
For Nell and Godfrey chose to stay out of sight.

They were cuddled up just under Rudolph's red bed
When they peeked out and all they could see
Was that red nose of Rudolph's as he flew up into the sky, And they only had time to call out. "Friend goodbye!"

"Go, Rudolph! You're brave and you're strong, they both cheered.
As they saw that it was dear Rudolph who steered
Santa's sleigh through the darkness, around every cloud. While the bells on the sleigh jingle-jangled aloud.

They waved and they called out and then fell asleep.
And then the next morning they were piled in a heap
When Santa and Rudolph returned after dawn.
"Wake up!" Rudolph said "It's now Christmas morn!"

Then those two awakened and smiled at the sight
Of Rudolph so happy! "Oh, what a delight!
"He's smiling," Nell cried. "Santa knows what we knew! "He's a reindeer with heart. He is good strong and true!"

Rudolph grinned and said,"Yes, yes, I guided the way!
"My nose was a beacon! I saved Christmas Day!
"And you, with your friendship, inspired me to do this. "So you Nell and Godfrey, helped Santa save Christmas!"

Now later that morning when you were awake. Busy opening your gifts, busy eating sweet cake.
Dear Santa was flying way up through the skies
With his three new friends , the three famous allies!

But up until now, Nell and Godfrey were a mystery.
Their friendship a secret in Christmastime history.
For both Nell and Godfrey are very shy creatures.
And never in pictures. Have you seen their features?

Except if you squint up at Santa's bright sleigh,
You'll see Nell and Godfrey calling, "Hip Hip Hooray!" Cheering on their friend Rudolph, while Santa brings toys
To all the good girls and to all the good boys!
And it's Rudolph the reindeer who knows that a friend
Is the best gift of all gifts – and that is the end!

In January 1939 Montgomery Ward & Co. asked young copywriter named Robert L. May to come up with some ideas for a special book to give to children during Christmas season. May finished his poem about Rudolph the red-nosed reindeer in late August. Montgomery Ward printed it and handed out more than 2 million copies that year. Children were instantly charmed by the story of Rudolph and his brilliant red nose.

During World War II, Rudolph went into hibernation, but in 1946, Montgomery Ward again published the book and in 1947 a small children's book publisher brought out an edition that sold 100,000copies in two years. May's friend Johnny Marks wrote the famous Rudolph song in 1949 and with Gene Autry's recording the song climbed to No.1 and sold 2 million copies during its first Christmas season. A filmed version of the story was made in 1964, and the story and song have now been translated into more then 25 different languages.
Posted by Barbara Brooker at 12/24/2008 09:42:00 PM No comments: Links to this post 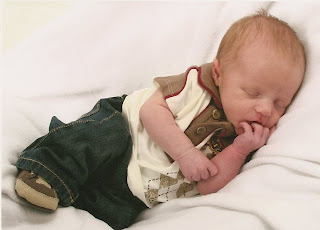 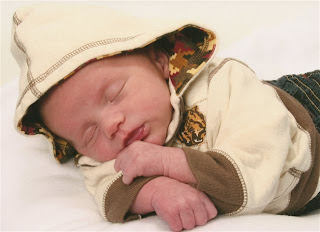 Hayden Jones- New grandson of longtime good friend Connie and Frank Jones-Aaaaah!
Posted by Barbara Brooker at 12/24/2008 07:58:00 AM No comments: Links to this post 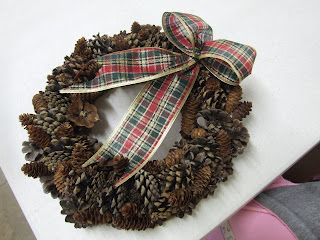 I made a pine cone wreath yesterday in Craft Class. It was fun except for the part where I burned my finger with the glue gun.
Posted by Barbara Brooker at 12/23/2008 07:56:00 AM No comments: Links to this post 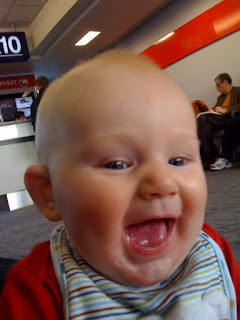 These wonderful babies we now have in our life have given me some extra time. They send pictures and I post them and waalaw another post is made but as the season for celebration is upon us, I thought perhaps it was time to celebrate our own lives too and fill everyone in on us.
We are more than fine. We are great. We have never been more grateful for all we have been blessed with in our lives. Everyday is met with gratitude and the things to be grateful for keep piling up.
As for the every day happenings, they are also abundant. We are both very busy. Butch has golf and pool and frequent knocks on our door with electrical issues to keep his skills in that area honed. I have golf (Tuesdays only),photography and the computer class to keep my skills active and alert. I learn so much from doing the computer class. I come here all rusty and then someone will ask a question needing research and I am off and running doing what I love best.
The diabetes is well under control with diet and exercise. Butch and I walk 2 miles a day at least. One mile in the morning and another in the evening. I have made it a priority and now it is a habit.
We are very busy while at Magnolia Park but we love it for the five months we are here and we also love the other parts of the year in other places just as much.
Yesterday we went to Mexico with Bill and Jo and had lunch at Garcia's above the Canada Store. A cold front went through just before we left so we were dressed appropriately but many were not. We have been having these chilly days about one or two days a week. They are little windows of opportunity for me to get caught up on indoor things. I am plugging away at Nina's blanket and it will be beautiful when finished. I like the way it is going but it may be warm weather in Georgia before she gets to use it! Not really,I seem to really get a spur on when these cold days hit.
We will be celebrating Christmas here in the park. On Christmas Eve we have a program in Allen Hall. There will be finger foods. I plan to tell the story of Rudolph's Secret Friends. It is a story I have carried around since December of 1996 when I cut it out of the Des Moines Register to read at Senior Haven in Cumberland Iowa. The newsprint is a bit hard to read so I went online to try and find the story but to no avail. I did think about typing it out but typing is mot one of my skills. Hmmm....Maybe I can find a typist!
We so hope your life is as you want it to be. Count your blessings every day and watch even more come your way.